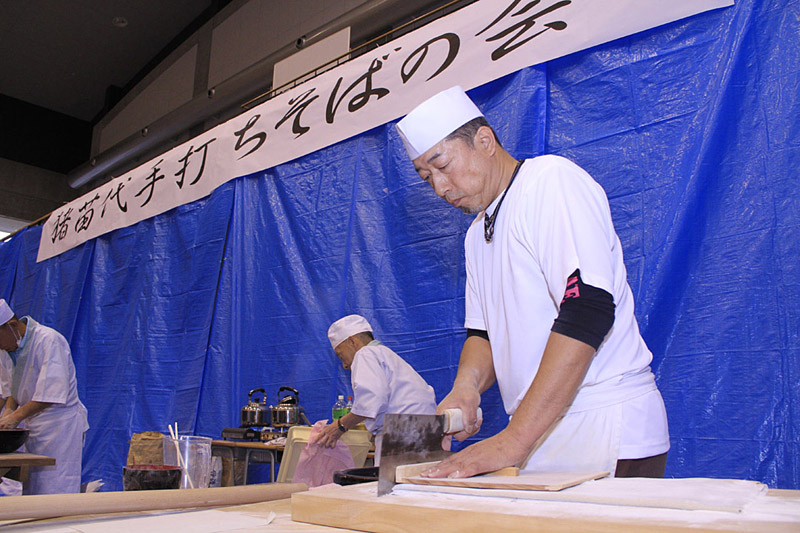 Have you ever attended a noodles festival? According to an article in the web newspaper that covers various topics about Fukushima, where Inawashiro town is located, soba (buckwheat noodles) has been a local specialty since early times. Noodles made from the buckwheat flour produced near Inawashiro town has been a goodie for ordinary people. Soba dishes are available everywhere across the country. However, they also tend to be a regional specialty because a good buckwheat harvest needs a stable source of mineral-rich natural water and good soil to grow in. 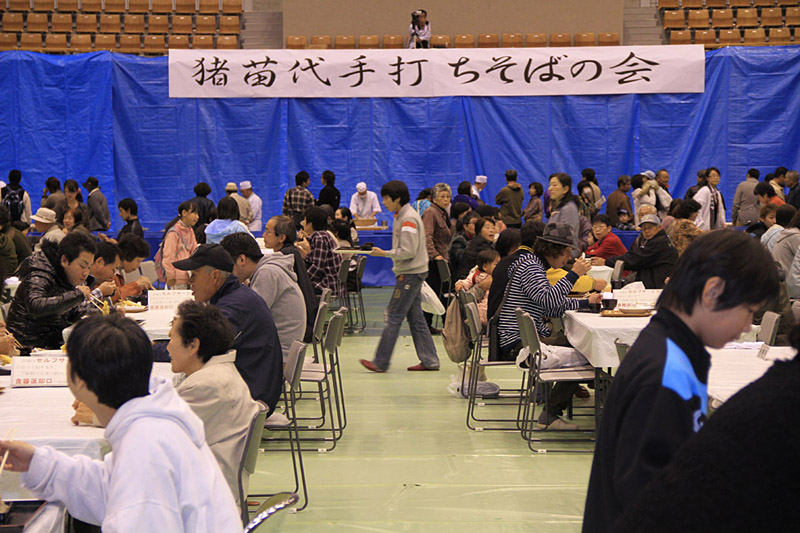 Probably, many Japanese agree that three prefectures: Nagano, Shimane, and Iwate are notably famous for their soba dishes. I have once enjoyed experiencing “Wanko soba,” which is Iwate’s popular soba dish. It is served rapidly by a server standing next to you while you are eating. My soba bowl got filled up with one portion of soba after another as soon as it was empty.

Several areas in the Tohoku region are suitable for growing buckwheat. And so are Inawashiro Town in Fukushima Prefecture, and its surrounding areas, where the new variety of soba – “天の香(Ten-no-Kaori)” or “Scent of Heaven” has started to be harvested. 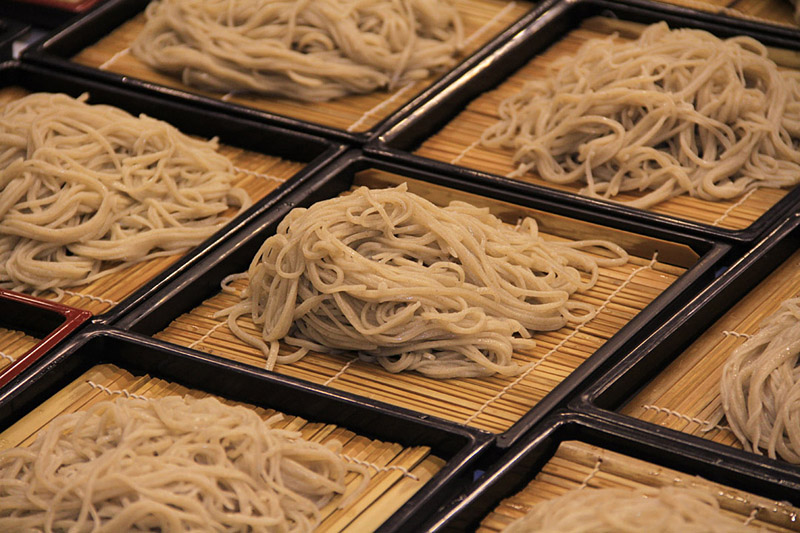 Inawashiro Shin Soba Matsuri is an annual festival. It takes place at the Kamerina Civic Gymnasium on the second Saturday and Sunday of November. It offers special soba meals made from the buckwheat produced in the town. 5,000 portions of soba dishes, which is one of the most significant numbers among the similar kind of festivals in the neighboring towns, are waiting for the visitors. The buckwheat flour in the soba noodles is the town’s exclusive “天の香(Ten-no-Kaori).”

Unfortunately, I don’t have such a delicate sense of taste. So, it would be hard for me to distinguish the soba noodle made from the ten-no-Kaori flour from one made of other buckwheat flour. But the ama-no-Kaori soba noodles probably has a good “chemistry” with dashi soup made from vegetables. The hot soup for the soba noodles has chicken and burdock roots as the main ingredients. This soba dish called shugen soba is the meal that you can taste at the soba festival. 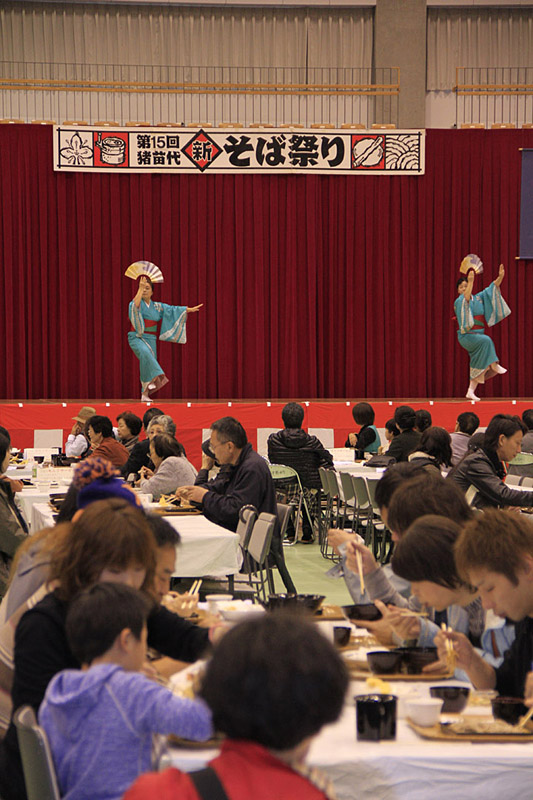 About Soba Noodles on the Menu

They serve hot “shugen” soba noodles and cold “zaru” or bamboo tray soba noodles. The price is ¥600 per portion. They also serve tempura combo, which costs you the same amount as the soba noodles. If you pre-order a set of coupons for this soba and tempura, they will give you a ¥100 discount for each dish. You can use the tempura combo ticket as a soba ticket so that you can enjoy two bowls of soba noodles – one hot and the other cold.

During the festival, there are also some other exciting events than serving soba. You can attend talk shows about soba noodles and history of the local buckwheat production, noodles preparation demonstrations by a professional cook, souvenir shops, and so on. The admission to the festival is free of charge. 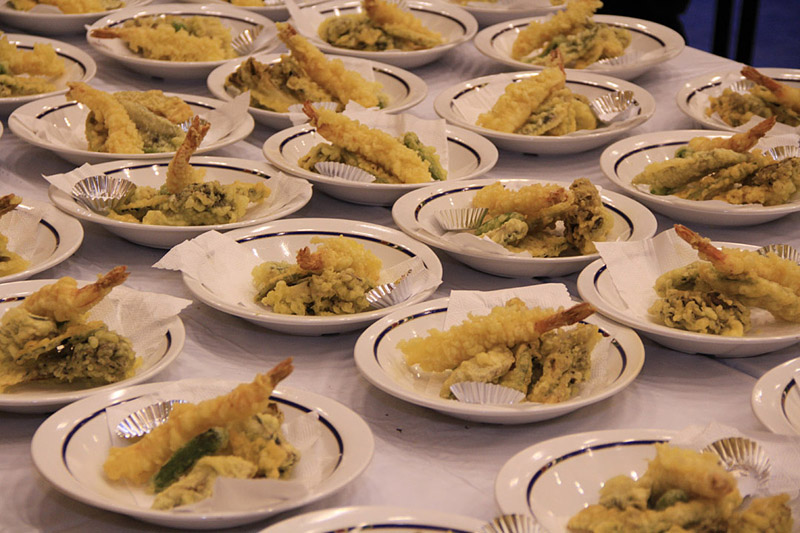 The Japanese word “shugen,” which means congratulatory words on favorable occasions, is probably an old phrase few young Japanese uses on a daily basis now. Shugen used to be presented exceptionally for newlyweds at the wedding ceremonies. In the old times, the marriage ceremony was the most sacred and favorable event for the local people living in the area, and it was also the occasion to enjoy a feast for celebration. Soba noodles were among the congratulatory dishes. Hence, the shugen soba got its name.

Incidentally, soba refers to another Japanese word “側(soba),” which means “being very close to someone or something.” Newlyweds pledge their eternal love and to be always close to help each other by eating soba noodles. The word 蕎麦(buckwheat noodles) and 側(being close) work as homophones and make a pun. 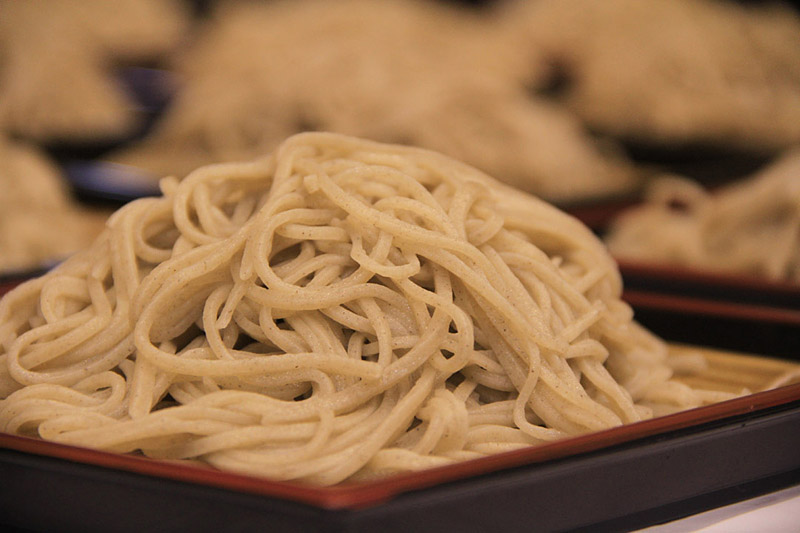 Dates: Second Saturday and Sunday of November every year.

Access: Kamerina Civic Hall – the venue of Inawashiro Soba Festival. It is 10-15 minutes’ walk from Inawashiro Station on the JR Ban’ets West Line. It also has a nickname – “water, forest and nostalgia railway.” The Line starts from Koriyama on the Tohoku Main Line, and Inawashiro is about 40 km away from the starting point. About 90 minutes’ ride on The Tohoku Shinkansen Express Line takes you to Koriyama from Tokyo. 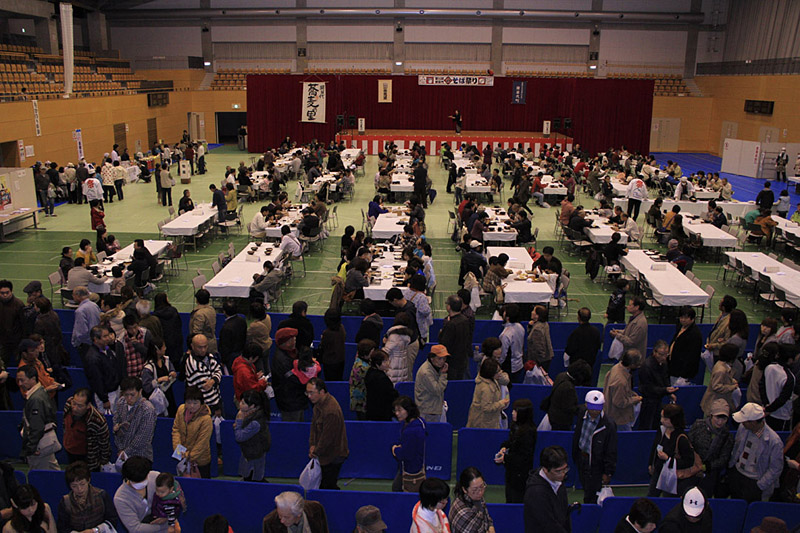 Many local communities make strong efforts to promote their buckwheat flour sales and elevate people’s interest towards soba. Wow, I’ve discovered on the Net that there are more than 20 local soba festivals registered to be held in Fukushima in fall. So, if you would like to try real Japanese authentic noodles, this festival gives you an excellent opportunity to do so.

Local guides can bring you to the Noodle festival and tell you much more about this traditional dish along with the information about the area. Please click on the banner below for more details.