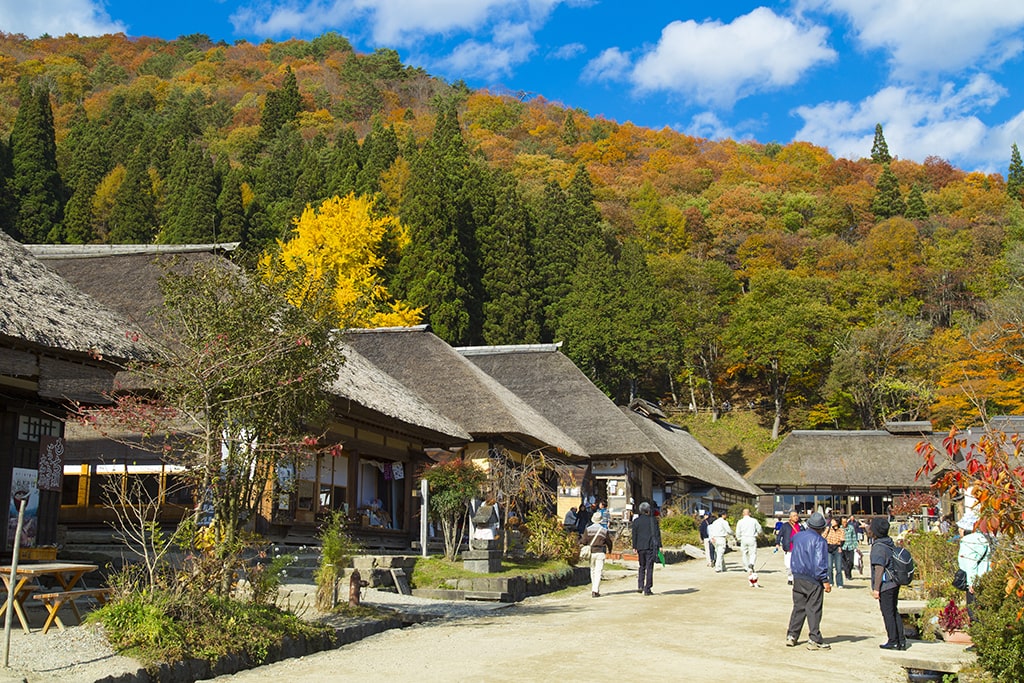 If you want to feel the pastoral atmosphere of the countryside of the good old Japan, Ouchi-juku(大内宿) is the best place for tourists to do so. It is located in the mountainous part of the southern Aizu region in Fukushima Prefecture, has been one of the most popular sightseeing spots in the prefecture. Over one million tourists visit the small village every year and enjoy several fun events that take place in each season.

A fabulous snow festival in February, a summer festival – Han-ge matsuri in July, a September fire drill where local firefighters use water cannons to sprinkle mist over thatched roofs of the houses across the village. In the fall, there are no festivals, but the mountains around the village turn red and yellow, which, I’m sure, is a real feast for your eyes. Now, how about transporting yourself back in time to the Edo Japan? Ouchi-juku – One of the Shukuba Towns in the Edo Period

Shukuba were established as post stations during the period of the Tokugawa Shogunate (1603-1867) in Japan. They were located on the “街道(kaido)” – main roads, including Edo Five Routes (江戸五街道”Edo-gokaido”) for goods transportation on horsebacks. Shukuba had several commercial facilities like inns that offered travelers, including feudal lords of some northern domains and their attendants, accommodations to rest on their long journey around the nation. Also, tea houses that served alcoholic beverages as well as meals. Ouchi-juku acted as a key post town on the Aizu Nishi Kaido (会津西街道: current Route 121), which connected Nikko (日光) and Wakamatsu (若松) and prospered as an important trade station as well. According to archive documents, Date Masamune (伊達政宗:1567-1636) and Toyotomi Hideyoshi (豊臣秀吉:1537-1598), who were both legendary feudal lords in the Age of Civil Wars (1467-1615), used the Kaido and rested at Ouchi-juku. Satoyama (里山) is a Japanese word that describes the pastoral landscape of a farming village in the mountainous countryside in Japan. According to an account of the definition of satoyama villages, they worked as forest managing points through their local agricultural communities. During the Edo period, villagers gathered fallen leaves from the community forests in fall to use them as a fertilizer in wet rice paddy fields. They also cut down some trees necessary to use for building houses, cooking, and heating. Autumn leaves were actually a part of villagers’ daily lives in their communities back in those days. Currently, however, used as an important scenic resource to attract tourists from outside and promote local tourism. The whole Aizu region, including its southern part where Ouchi-juku is located, consists of several scenic areas. Especially in the fall, people go and enjoy hiking the mountainous trails. The “塔のへつり (To-no-hetsuri)” Cliffs Area will become a natural wonder with piles of bizarre-looking huge rocks in the twisting gorge. Its natural beauty is worthy of admiration on your autumn leaves peeping trail. They are said to have been formed during the Pleistocene Epoch (更新世), carved out by the river running along the cliffs area.

Incidentally, the kanji character “塔(tou)” means a “tower” and the hiragana expression “へつり” is said to have come from “へつる(hetsuru)”, which is a verb inflected from “けずる(kezuru) ot “to gouge”. The cliffs, designated as a natural monument since 1943, are located about a 5-minute walk from Aizu Railway Aizu Line’s To-No-Hetsuri Station, which is just one stop away from Yunokami-Onsen Station – the nearest railway station from Ouchi-juku.

Things to Do at Ouchi-juku

The Aizu region is famous for a good quality soba buckwheat production. Local specialties using the dark grains attract gourmets from far and wide. Soba restaurants are ubiquitous eateries in the country, but the soba dish called “negisoba” or long leek soba noodles served and eaten in restaurants in Ouchi-juku, probably stands out from ones in the other regions, since a two-pronged unsliced leek accompanies the soba bowl. The leek is put over the soba bowl as chopsticks when served to scoop up the noodles from the soup broth. Don’t worry. Wooden chopsticks are also available, of course. How about trying this unique soba dish to recharge energy when you want to take a lunch break after strolling through the well-preserved old town? Tucked away in the hillside surrounded by a lot of tall Japanese cedar trees, Takakura Shrine, enshrining the soul of a son of Emperor Go-Shirakawa (1127-1192), boasts a photogenic place which overlooks the panoramic view of the whole Ouchi-juku town. How about taking photos of it for best Momiji shots and feeling the history and tradition of the Edo period?

If you’d like local guides to accompany you during your trip to Fukushima and tell you, even more, about the area and its traditions, please check the banner below!

For those who want to enjoy Autumn leaves… You probably know that autumn with its colorful leaves scenes is as popular among tourists and locals as spring with its cherry blossoms. Momiji or enjoying autumn leaves is an indispensable part of Japanese culture. I hope this article raised your interest in Japanese autumn. And the following one picked top 12 best places and events to enjoy colorful autumn leaves!
Check it out! URL:https://festivalgo.huber-japan.com/events/4274/