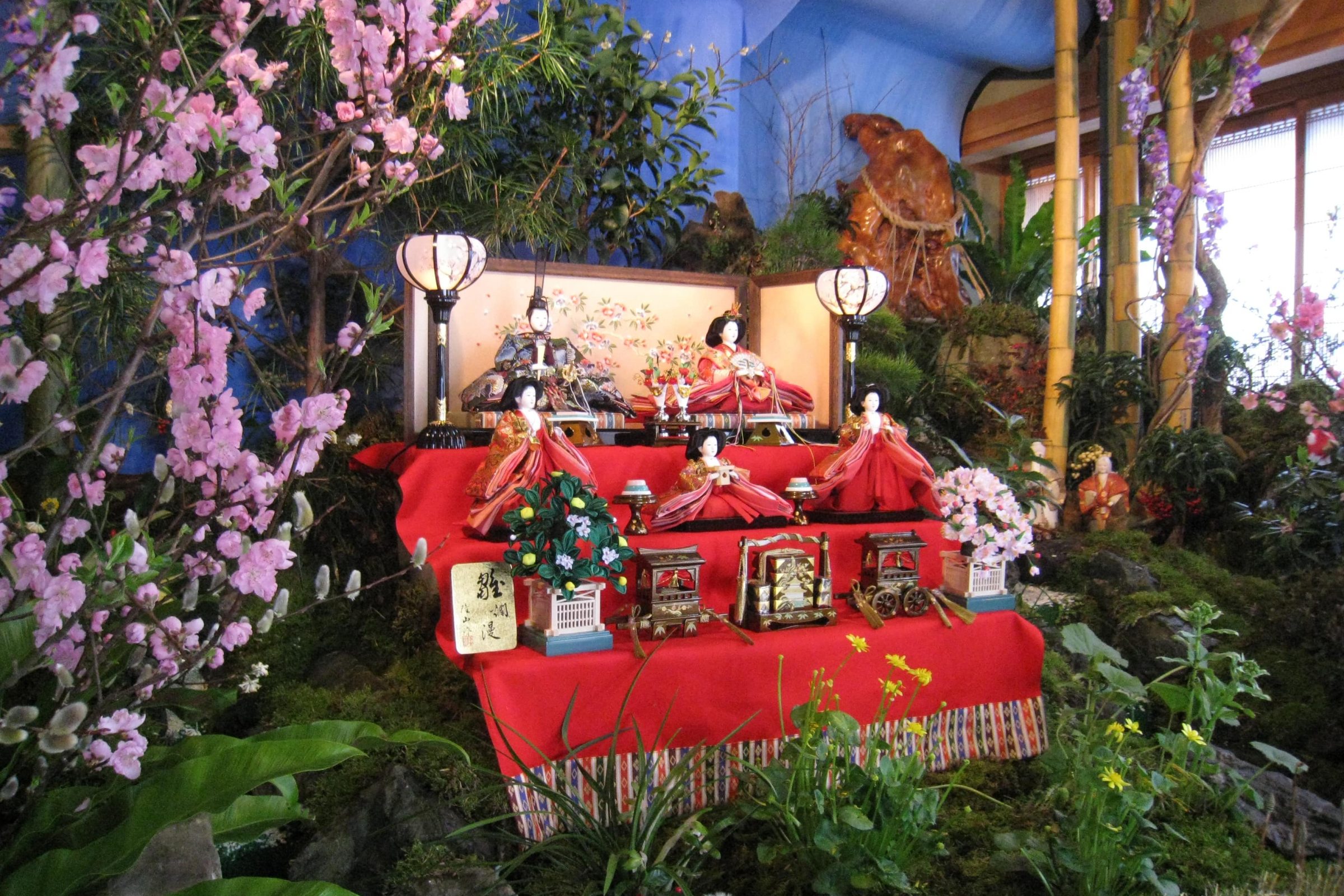 Hina Matsuri (雛祭り) is a traditional Japanese event that takes place on March 3rd everywhere in Japan. The event is also known as the Peach Festival as peach trees begin to blossom around this day. Elaborately decorated dolls in the noble court dresses of the Heian Period (794-1185) are set out on display in homes and shops around the country. The dolls displayed to represent the wedding of the Emperor and the Empress. More gorgeous displays include more dolls that represent court ladies, musicians, and other attendants on a three or seven-tiered doll stand covered with a red cloth. 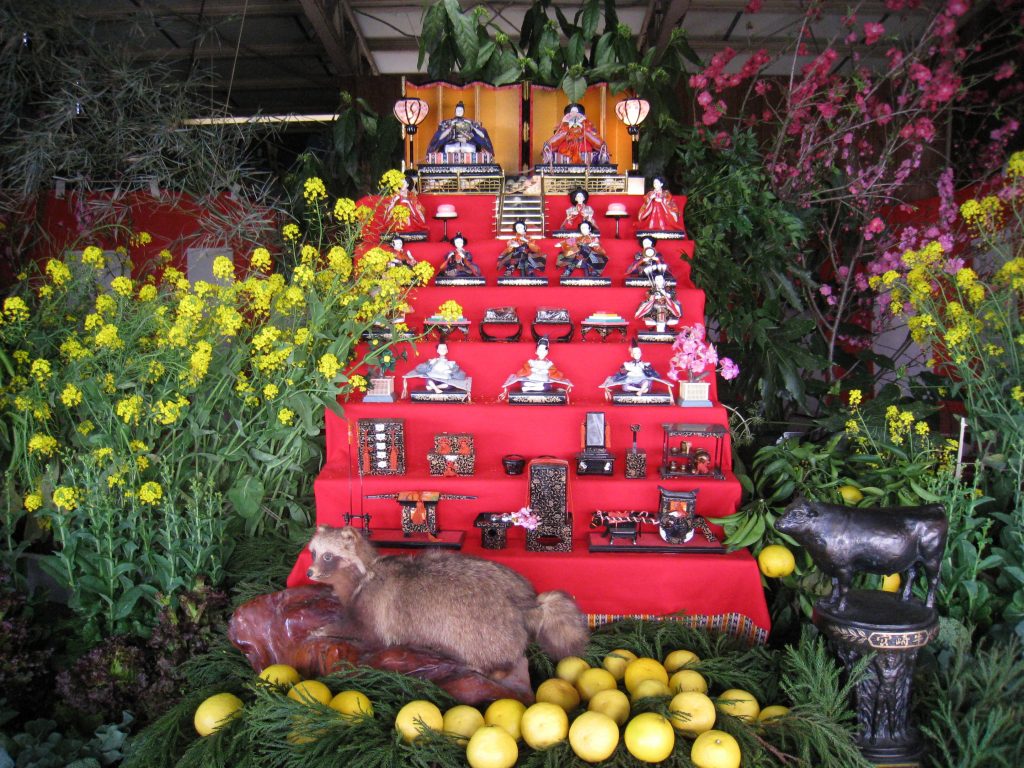 The Origin of Hina Matsuri

In Shintoism, there is a religious rite called “O-harai (お祓い)” to purify yourself and to drive away the evil spirits. O-harai used to be practiced by the Imperial Court twice a year and became a common custom in the society in the Heian Period. According to the records, one of the O-harai rituals was on the Peach Festival, which people believed to be an auspicious day to perform the ceremony of purging themselves from their sins. People transfer their own sins to dolls made of paper, wood or straw and threw them into the river or ocean. This is considered to be the origin of Hina Matsuri. Over time, this custom found its current style that celebrates the health and happiness of young girls. 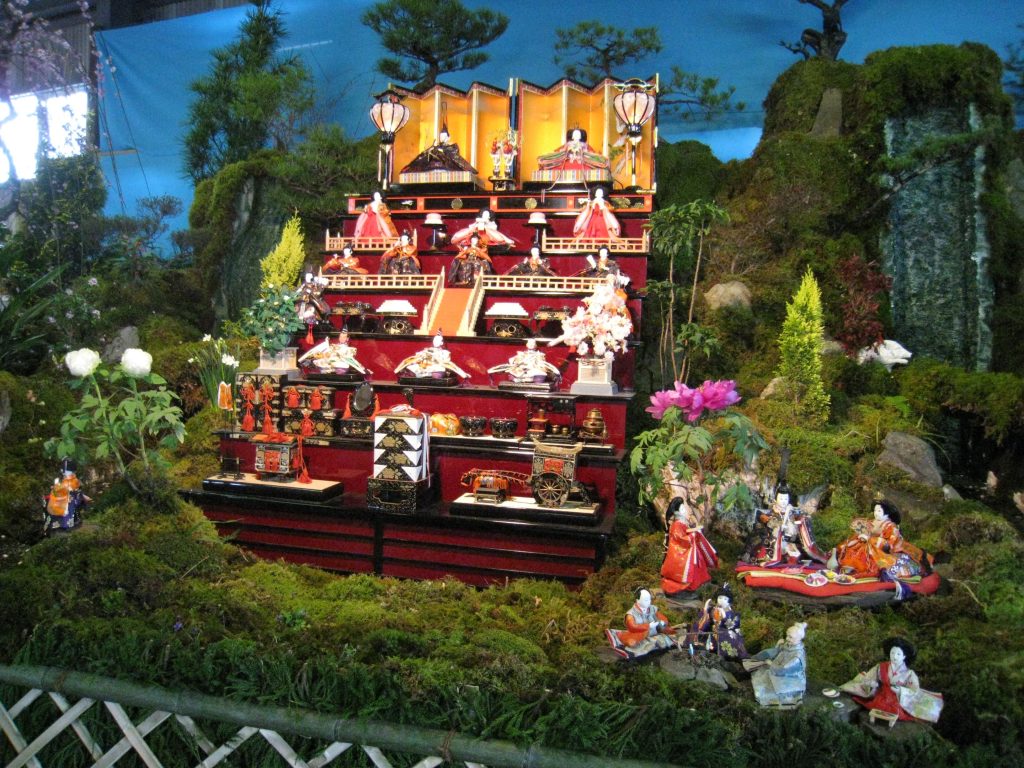 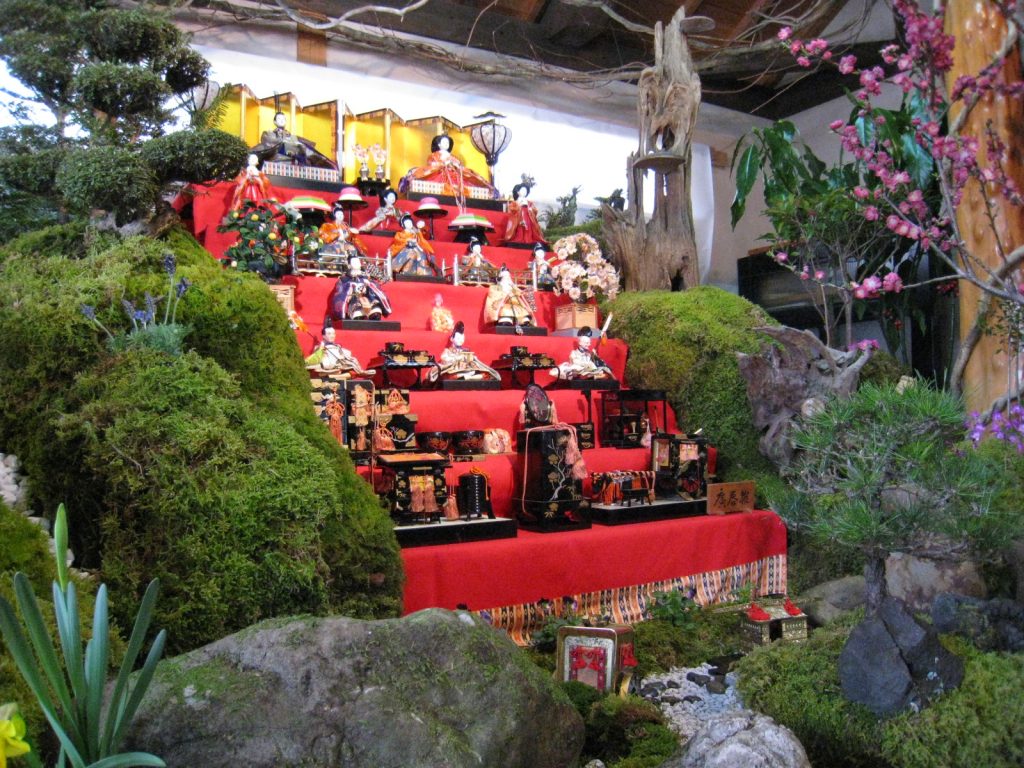 Aya Town annually hosts a Doll Festival, which is held for two weeks from late February to early March. During the period of the festival, “Hina (雛)” dolls are displayed at about 20 places including local shops and other public areas around the town.

Unlike the typical doll displays are seen at other Hina Doll festivals, Aya’s ornamental dolls are put on display in “hina-yama (雛山)” – small-size hand-made mounds that miniaturize the local forests and mountains. They are kind of artificial fields covered with green grass, moss, fallen twigs, rocks, and so on. This tradition of making hina-yama mounds is hundreds of years old. In ancient times, people believed that women were the incarnations of mountain deities. Even when people were so poor that they lived from hand to mouth, they managed to gather clay, twigs, flowers from the mountains to make dolls to celebrate young girls’ happiness. Take a good look at the dolls’ faces, and you’ll find that some are smiling, some are crying, and some are pouting. Their faces seem to express the vicissitudes of lives the ancestors lived.

On the last day of the festival, children in the town gather and parade through the main street in a beautiful procession. At this “Aya-hina” procession, you will see around 80 kids wearing traditional costumes who follow a woman masquerading as the Empress Doll and enjoy the vibrant parade. 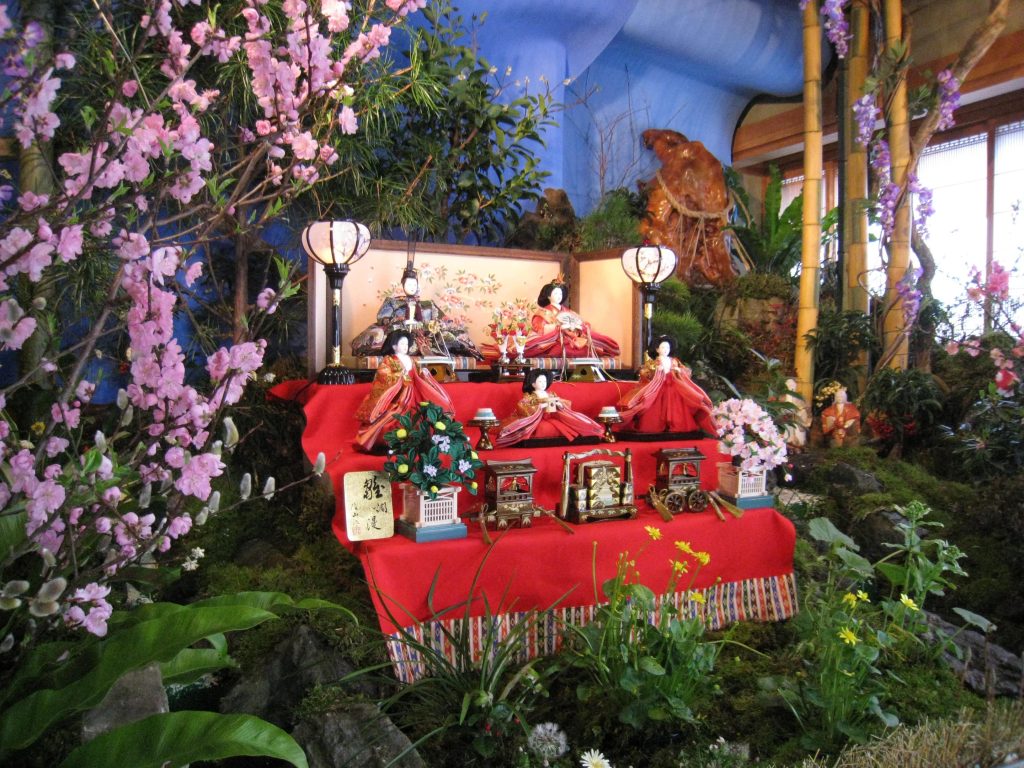 Other Things to Do at Aya Town

Do you know the word “ecotourism”? There are a few definitions for it. According to the one from the International Union for Conservation of Nature, ecotourism is an environmentally responsible way of travelling to natural areas, in order to enjoy and appreciate nature (and accompanying cultural features, both past and present) that promotes conservation, has a low visitor impact, and provides for beneficially active socioeconomic involvement of local people.

And Aya Town, 40 km northwest of the Miyazaki City in the southern part of Kyushu Island, is a lovely historic place known for its several traditional handicrafts and has a UNESCO-designated forest area called the Aya Biosphere Reserve (established in 2012). Its lucidophyllous forest straddling around the mountainous areas is one of the country’s largest and inhabited by many indigenous species. This place is becoming a big draw for many ecotourists from around the world,

Travel seven kilometers northwest from Aya Town, and you will arrive at the Aya River Gorge, which is spanned by the Aya Teruha Suspension Bridge, the second highest pedestrian bridge in Japan at 142 meters. Major renovation work on the bridge in 2010 replaced its old bottom with a new one of metal grating. So, crossing the bridge with its length of 250 meters takes at least five minutes, which is surely long enough to bring trembling to your knees. You should be brave enough to cross this bridge. Different seasons bring different beauty to the forest area around the bridge so you can enjoy the breathtaking scenery as well.

The Coexistence with Nature

What makes Aya Town distinctively different from many other local communities is its environmental policy to protect natural resources that conversely becomes a sustainable base for local industries. The small town pioneered in starting a waste recycling policy that prevailed later among other communities in Japan. More than 60 percent of the local farmers in the town practice organic farming.

And artistic handicraft products are produced from local natural resources protected by local people in a sustainable way. Aya Town has been designated as a UNESCO Man and the Biosphere Program, which aims to establish a worldwide network of scientific bases for studying the improvement of relationships between people and the environment they live in. Also, it is becoming noted for its ecotourism, including a new style of tourism for healing purposes called “forest therapy”, and forest environmental education. 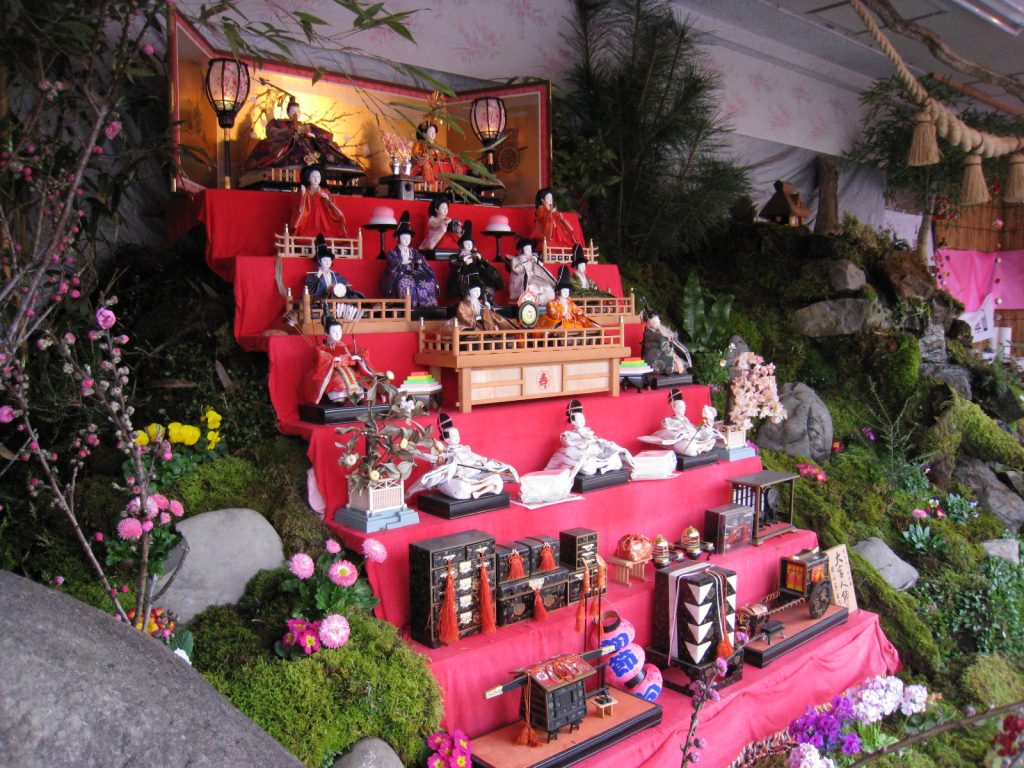 On weekends of the festival, bowls of Dago-jiru (だご汁) soup, known as a local cuisine of the town, is served free of charge to the first 200 visitors. It resembles miso soup in taste and appearance and contains wheat dumplings. How about trying this local specialty of the town while enjoying the festival?
If you would like to explore Miyazaki prefecture with a local guide, who will provide you with the essential information about the region and show you this festival, please click on the banner below!