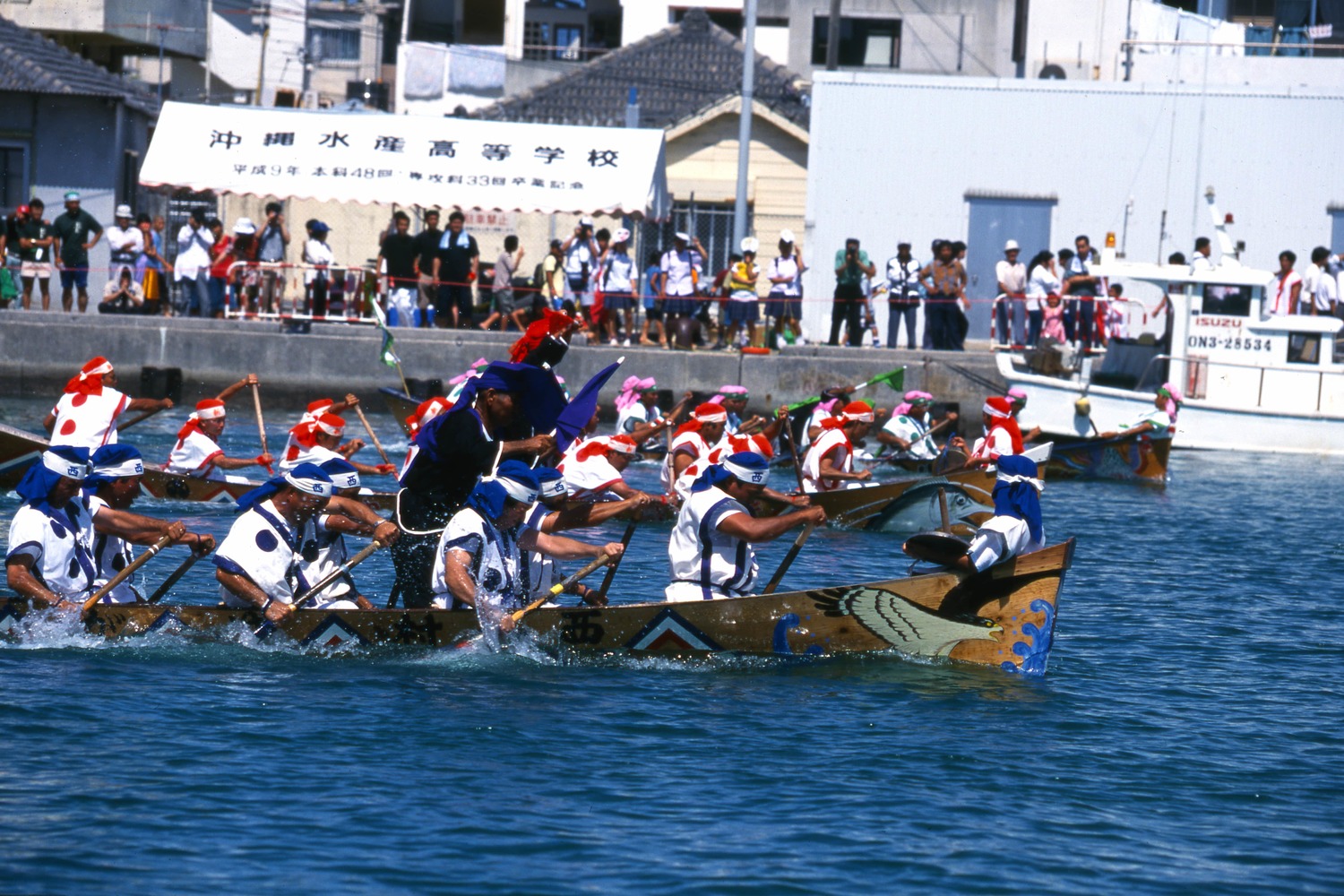 When I lived in Sumida, Tokyo, as a small kid, my father would take me every April to the riverside of the Sumida River, which runs along Asakusa, Ginza, and Tsukiji in Central Tokyo. His purpose was to watch the Waseda Keio Regatta. This rowing boat race since 1905 is called “The Regatta”, an annual popular sports event which showcases the rivalry between Waseda University and Keio University. (This intercollegiate rivalry is very similar to the one between Cambridge and Oxford in England.) I enjoyed the “festivity” of the race though I didn’t know anything about regatta at that time. The sight of muscular fishermen rowing at a fierce pace in Itoman’s Harley reminded me of the memory from my childhood.

What Should You Know about the Festival before Your Departure? 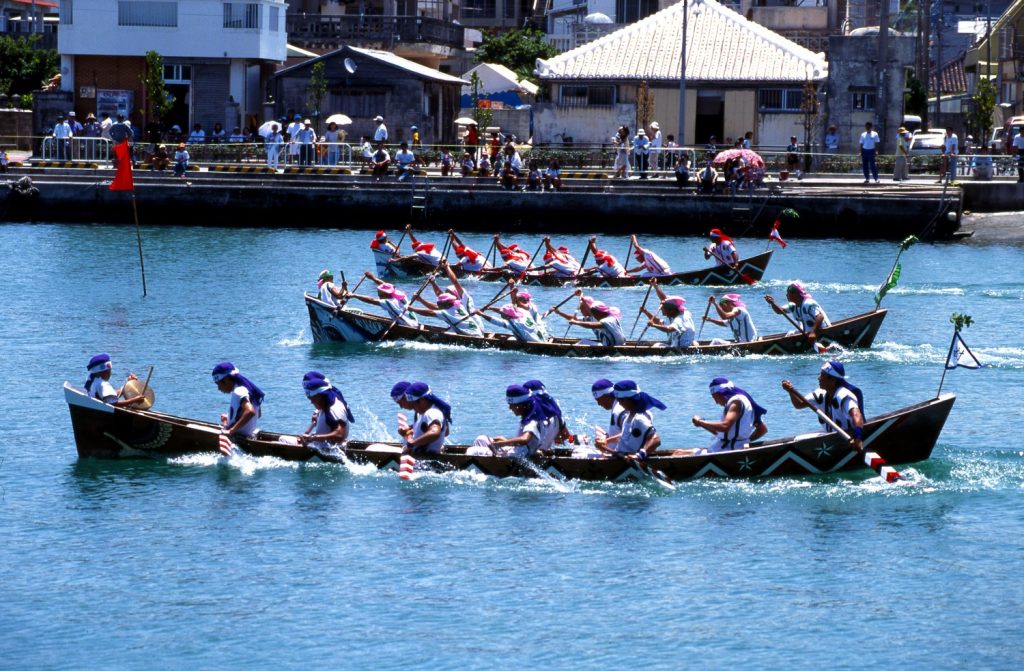 What is Harley Festival?

Harley Festival is a traditional event that hosts rowing “Harley” boat races in Itoman and in Naha. Sounds like an American motorcycle maker, doesn’t it? The word “Harley” is said to have come from “haryu-sen (爬竜船)”, which translates literally to “dragon boat” in English, so the event is unrelated to motorcycles.

The dragon boat is a canoe-esque boat generally fixed with decorative Chinese dragon heads and tails. There are 10 people as rowers with a navigator, a drummer, and a flag puller on one boat. Making several groups, local fishermen compete against each other not only to show their powerful paddling skills but to worship the deity of the sea and pray for their safe seafaring lives and good catches of fish.

The Origin of Dragon Boat Racing

The advent of dragon boats for racing is said to have originated in the central south of China more than 2500 years ago along the banks of the current Yangzi River. Since then, in China, dragon boat racing has been held as the basis for annual water rituals and festivals and for the traditional reverence for the Chinese dragon water deity.

According to the traditional Chinese zodiac, the dragon represented the deities of water on earth. People believed that there were rulers of rivers, lakes, seas and even water from the heaven like rains and clouds and that the rulers were dragons. Over time, this belief in the mythical creatures became the custom of worshipping them as the sea gods for seafaring people to avert misfortunes on water. 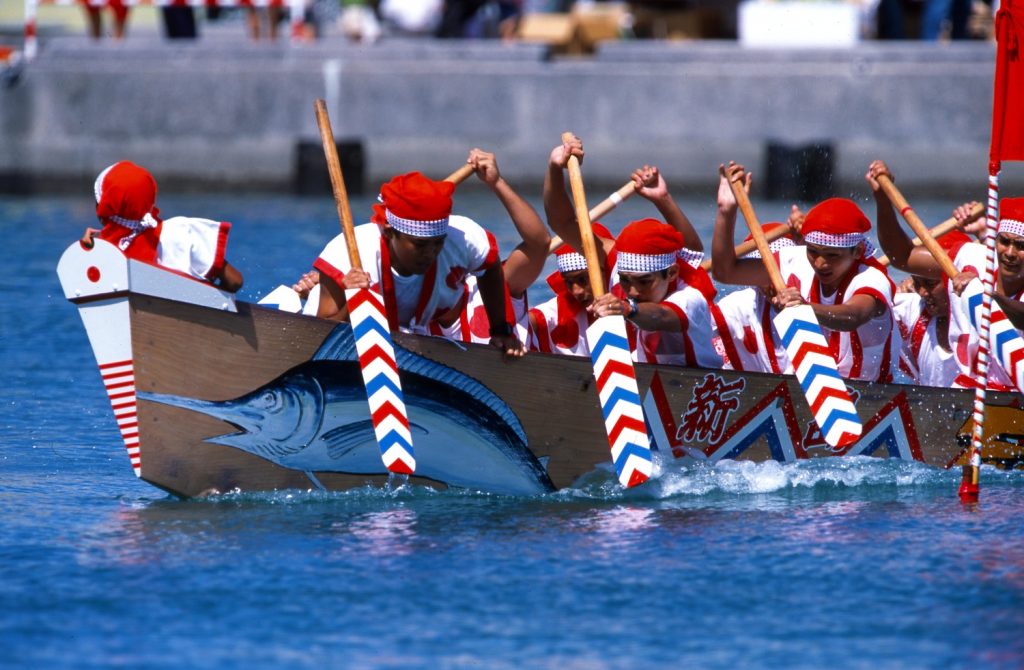 Now, let me introduce to you some main events of the festival.

One week before the festival, people hear “Harley Bells” clanging in the early morning from the elevated land called Santeimo, located to the north of the Itoman Roundabout. As a local maxim goes, “Summer is just around the corner when Harley Bells ring.” Harley at Itoman consists mainly of four dragon boat races: Ugan Harley, Youth Harley, Kun-nukase, Agai-subu.

At this event, fishermen pray to their ancestors and the deity of the sea and then head down to the jetties, where they get on their dragon boats to start the race. They race not only to determine who will win but to thank the sea deity for safe seafaring.

Girls groups dance and sing as “Halftime Show” in between the races. This is a lovely attraction you can enjoy.

At this event, anyone, visitors and residents, can jump into the sea and catch ducks paddling around them within in the given time. There are also several balls floating on the water for the participants to be able to catch. The balls are “redeemable” for fruits and fish. Rest assured that rescuers watch out for your safety and there are some inflatables to hold onto in emergency.

At this event, all the crew members let their boats capsize on purpose halfway through the race, and then they restart it by turning their capsized boats to right positions and bailing water out of them. To start paddling, they have to put out the water in the boat as quickly as possible.

This is a time trial. Best paddlers from each village get on their boats and race the 2150-meter course. This is the race for each village’s honor. To start with, the dragon boats go anti-clockwise to the singing by the audience around the given course three times. And the race starts. Watching them paddle energetically for a record is the most exciting moment of this festival. 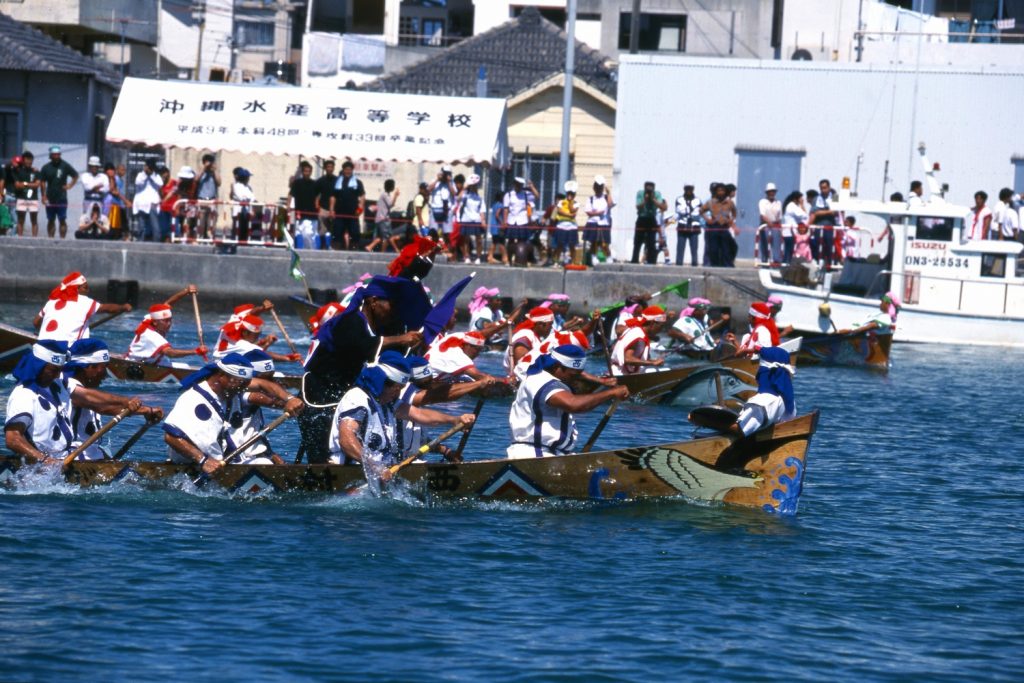 Another Harley Festival, the biggest one in Okinawa, is also held in Naha, the Capital of Okinawa Prefecture, during the holiday-studded Golden Week of May. In Naha Harley, visitors have an opportunity to take a ride on a dragon boat as well. You can learn more about Naha Harley from this article, URL: https://festivalgo.huber-japan.com/events/events/naha-hurley-enjoy-exciting-boats-competition-okinawa

If you would like to attend see this breathtaking and energetic festival with a local guide, who will tell you even more about traditions in Okinawa and take you around the neighborhood, please check the banner below!