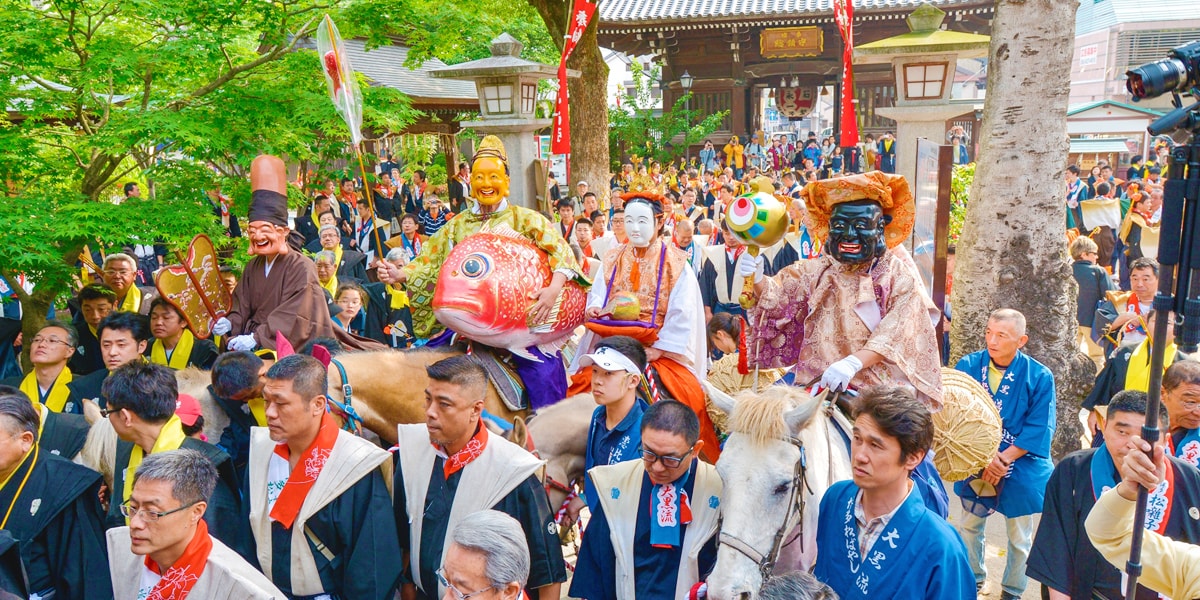 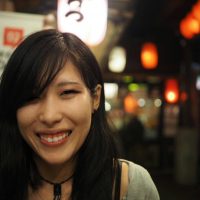 The “Golden Week” represents a holiday week that celebrates a series of events. It’s a special holiday week at the beginning of May. It is a peak season for local travelers within Japan.

During the Golden Week, Fukuoka city hosts one of the hottest festivals called the “Hakata Dontaku Festival”.

In this article, I would like to introduce you to the story of “Hakata Dontaku Festival” – most well known May festival in Fukuoka and how to take most of its joy!

Hakata Dontaku ( 博多どんたく) is an annual festival taking place in Fukuoka City on May 3rd and 4th.
It had been held for over 830 years. Just like Hakata Gion Yamakasa festival, Hakata Dontaku festival is one of the most famous festivals in Fukuoka City. Around 2 million people visit there to see it every year. This also makes it one of the most famous festivals in Japan as well. 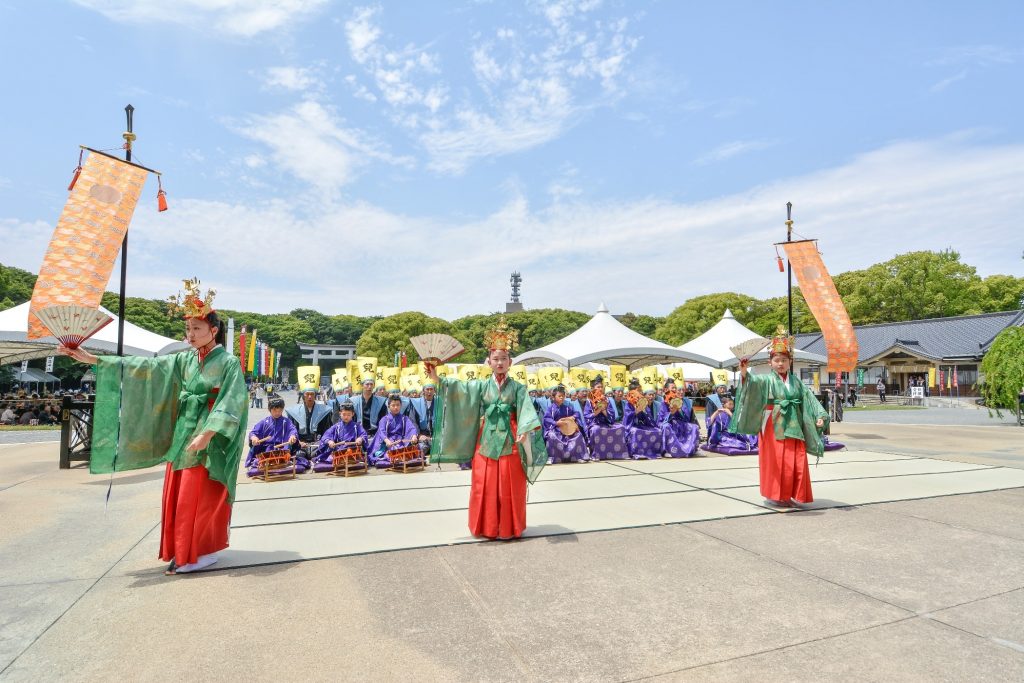 The official name is “福岡市民の祭り 博多どんたく港まつり(Citizen’s Festival Hakata Dontaku Port Festival)”. Most of the Hakata citizens from children to seniors are participating in this festival.
The name of festival “Dontaku” derives from “Zondag” meaning “Sunday/holiday” in Dutch, though before the festival was known as “Torimon” festival. This festival was under a ban in the Meiji Era for its “extravagance”, but citizens kept the tradition by changing the festival`s name. One more interesting fact is that this festival was suspended during World War II, but revived to bring life to the city when the war was over. These facts make Hakata Dontaku Festival be very long living and surviving event significant for locals. 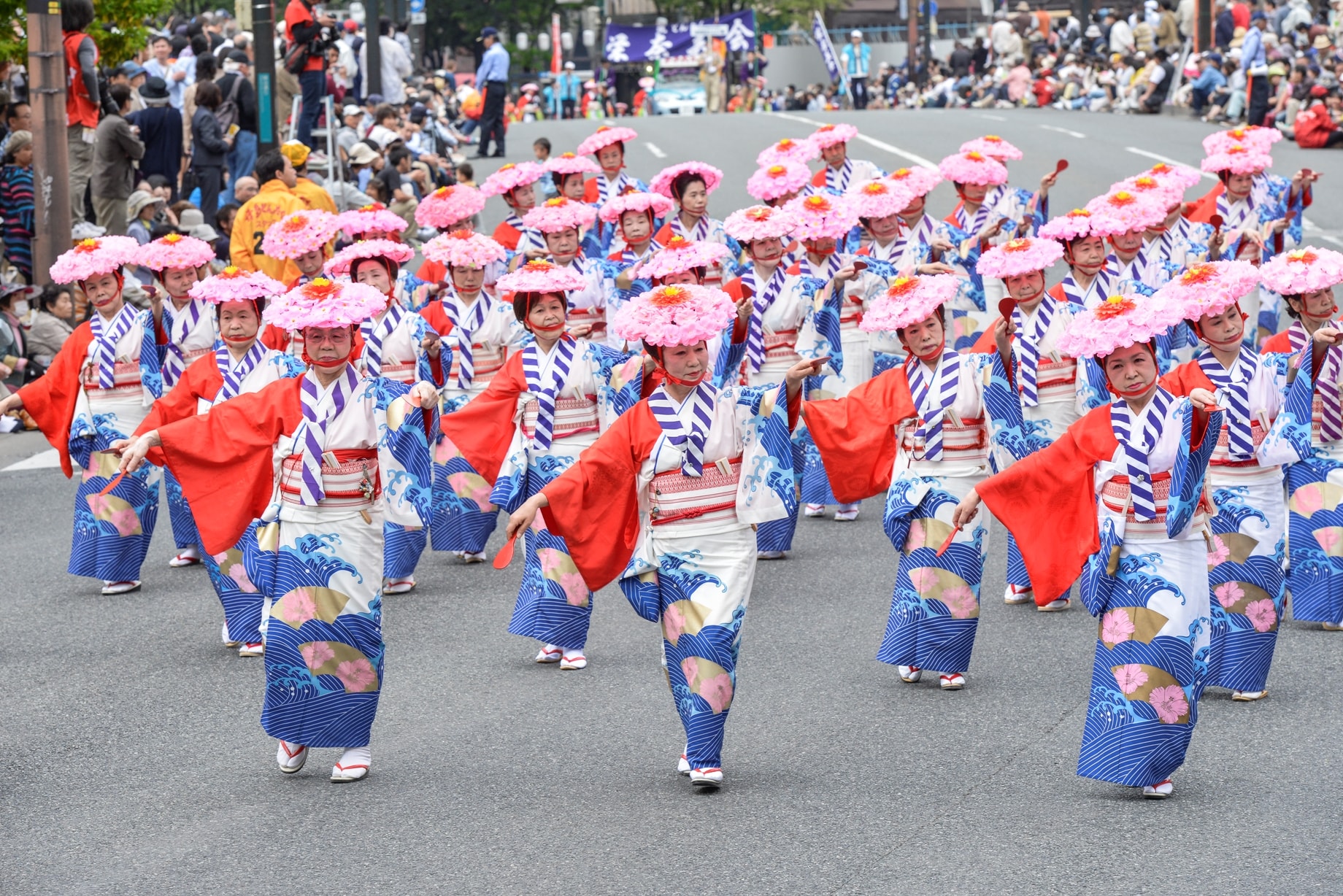 Things To Do and See

Even though official dates of the festival are 3rd and 4th of May, on May 2nd a special pre-opening ceremony takes place at the Kokusai Centre (International Centre) of Hakata city in the evening. At this ceremony, all participating groups make final preparations for the parade. At the same ceremony, new  “Miss Fukuoka” is elected, and will be joining the festival next days!

The festival starts not far from Hakata port, which becomes very lively at that moment. Officially Hakata Dontaku Festival begins with the speech of the Mayor. Then the parade starts with a long living tradition of worshipping three principal deities. It would be a shame to miss the “the Three Deities of Good Fortune”! 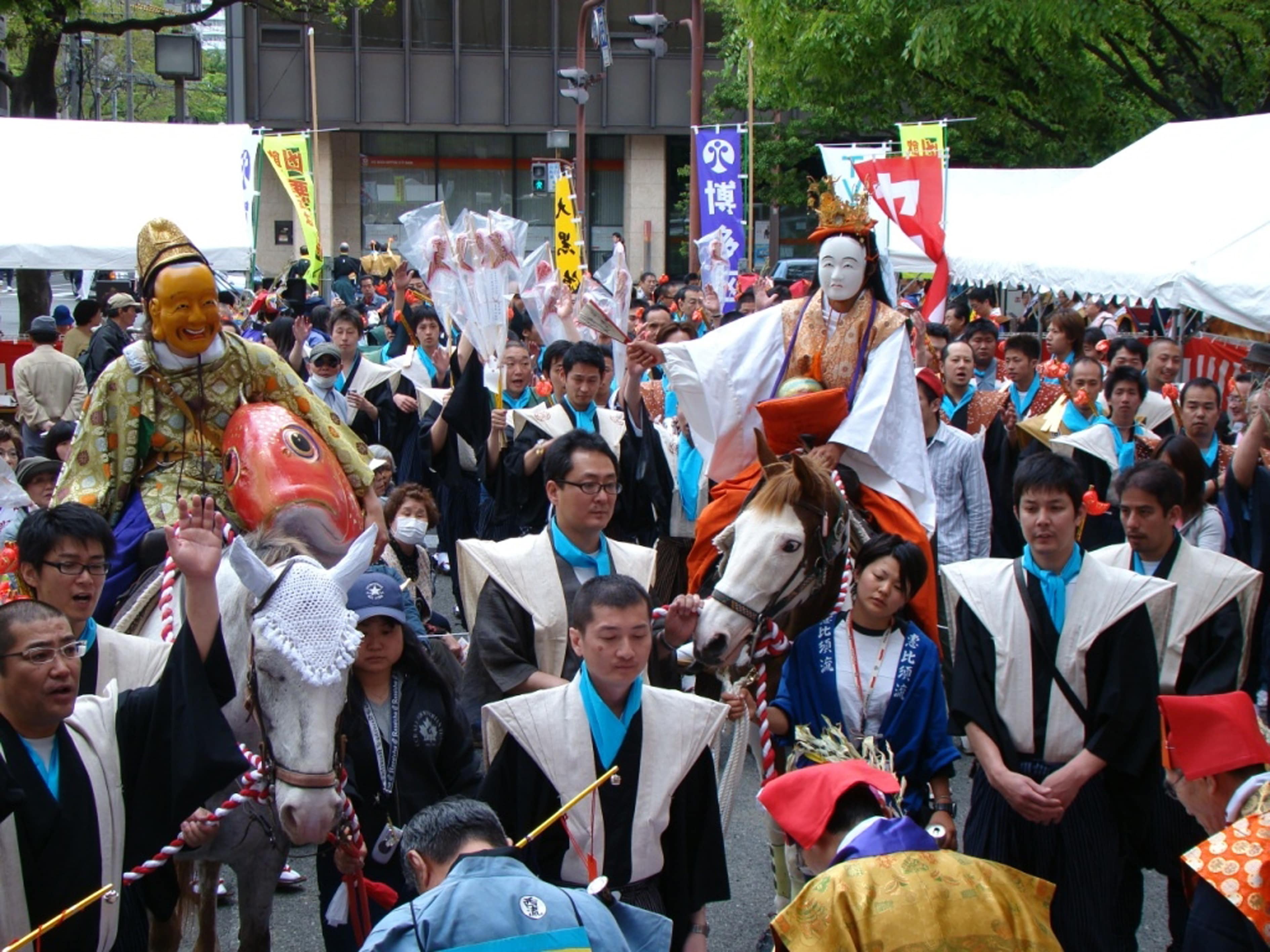 Initially, Dontaku develops its roots from “Hakata Matsubayashi” which is a celebration for three gods: “Fukujin”, “Ebisu”, “Daikoku” and children. This parade consists of 4 groups.

Fukujin group will be the first group to start walking as a headliner followed by two groups the Ebisu and the Daikoku groups. Fukujin – the deity of longevity. You can quickly recognize him by a long mask. Ebisu and Daikoku – his wife, represent the gods of business and success. Ebisu is famous to be responsible for fishery and Daikoku represents agriculture. You can identify male deity – Ebisu by a huge red snapper under his left arm. He also has a fishing rod on his right. Daikoku`s signature is a black mask on his face. He carries two bags of rice on his back. They will appear during the intro of the festival on the 3rd of May. 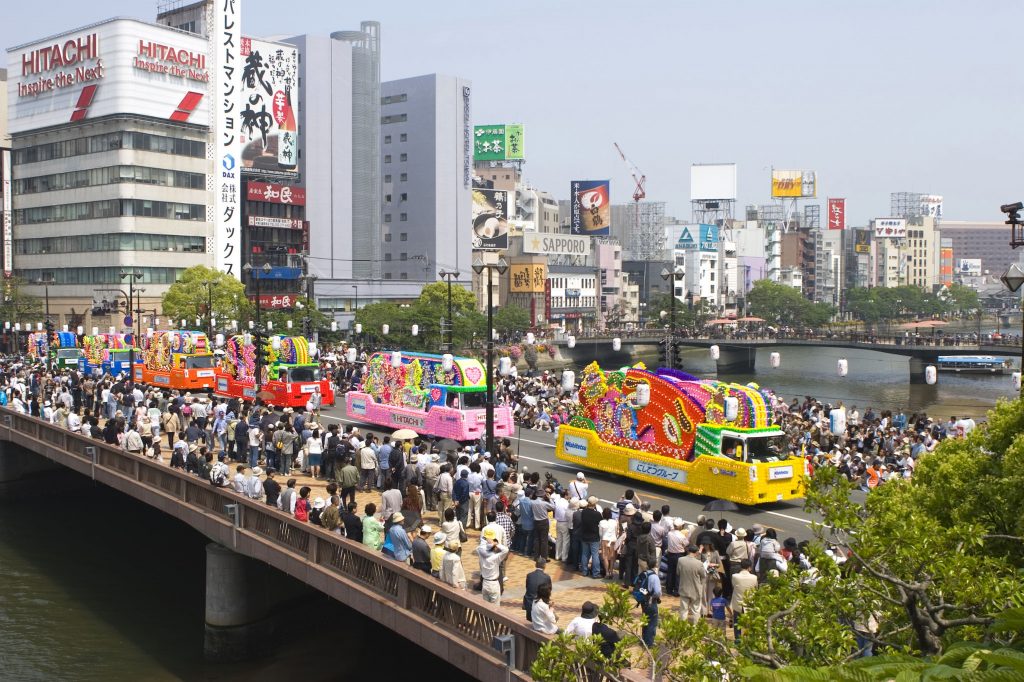 The Highlight of the Festival – a Dance Parade

Thousands of dancers called “Torimon” dance along the Meiji street located in the center of Fukuoka city. They dance with rhythms created by shamoji しゃもじ (a wooden spoon for rice) that they use at the parade. Generally, there are more than 500 groups that perform at the parade. Even though shamoji is the primary instrument that they use at this festival, some groups also play shamisen (a Japanese stringed instrument) or beat the drums. All groups wear a different outfit. Some only show their costumes and other dance.

Besides, colorful Hana Jidosha – beautifully decorated vehicles are also attracting a lot of attention from the viewers. These cars are an essential part of the parade. Usually, two teams with three vesicles participate at a different time. Every year the decorations on the vesicles change, but it is worth seeing over 10000 artificial flowers along with 1200 LED lights and original designs. Even more wonderful the cars look at night when all the bulbs are lighted. Before 1977 tramcars were used for the festival purposes, but since the tram service was suspended in the city, they switched to cars. 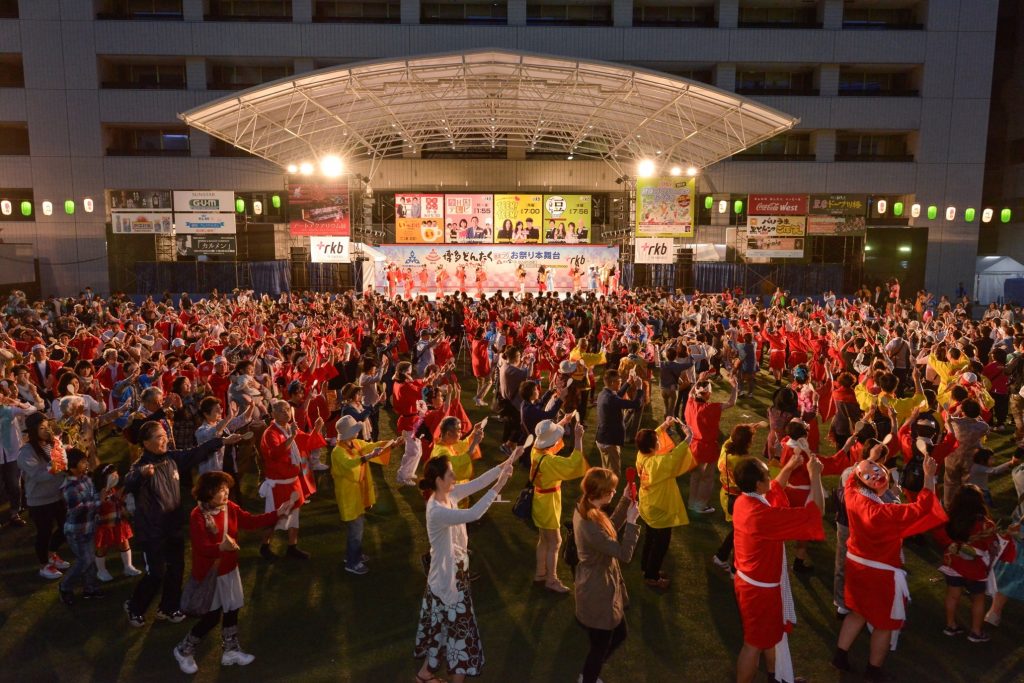 One more interesting point of Dontaku festival in Fukuoka is that tourists can participate in dancing during the final stage of the event. Don’t worry about your dancing skills, anyone is allowed to participate!

The parade participants walk around 12 km from Gofuku-machi intersection to Fukuoka city hall.
If you would like to go to the start point, I`d suggest you use subway and aim to Gofukumachi station which is the nearest station from there.

When you come from Hakata station, which is the biggest station in Fukuoka city, you will need to change trains at Nakasu Kawabata station. But I suggest you get off at Gion station and walk. It is also very close to Gofuku-machi intersection, and you will be able to visit some sightseeing spots such as Kushida shrine on your way.
It will only take you 5 minutes to walk to Tenjin station from Fukuoka city hall.

If you would like to know more about Hakata Dontaku Festival and be up to date on the event look at the official page of Japan National Tourism Organization! 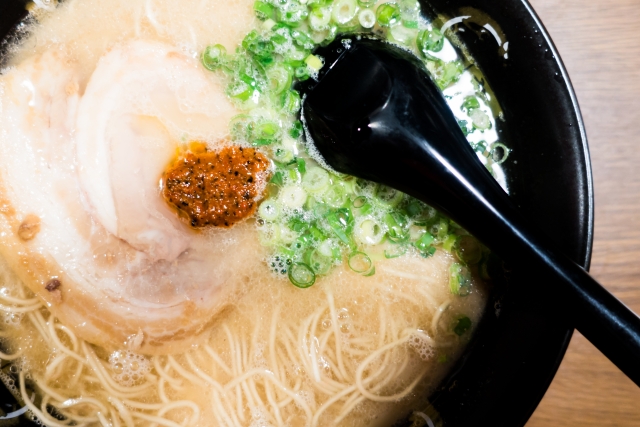 Other Thing to Do in Fukuoka City

After visiting the Hakata Dontaku Festival, you must try something at “yatai” (food stalls) in Fukuoka city! These are outside stalls. And you can only find it during night time (mostly from 6 pm to midnight) around Hakata and Tenjin area. But the best place to find yatai is on the southern end of Nakasu Island, which has the longest row of various food stalls. You should try miscellaneous and delicious foods such as Hakata ramen and Yakitori (grilled chicken) and different types of alcohol. As these spaces are quite tiny and there are only about 10 seats for guests in each Yatai. That means it would be a great place to communicate with the owner and other guests. You will definitely be able to have a great time with them!

During the festival, you have a chance to buy original festival goods, which include such items as various wooden spoons (shamoji), original Fukuoka wooden charm, original folding fan, lucky bag and many more! Usually, souvenir shops with those goods are close to the food stalls, so you can enjoy the street food tasting and shops at the same time. Why not bring an original souvenir that is connected to only this event and remind you of it for a long time? 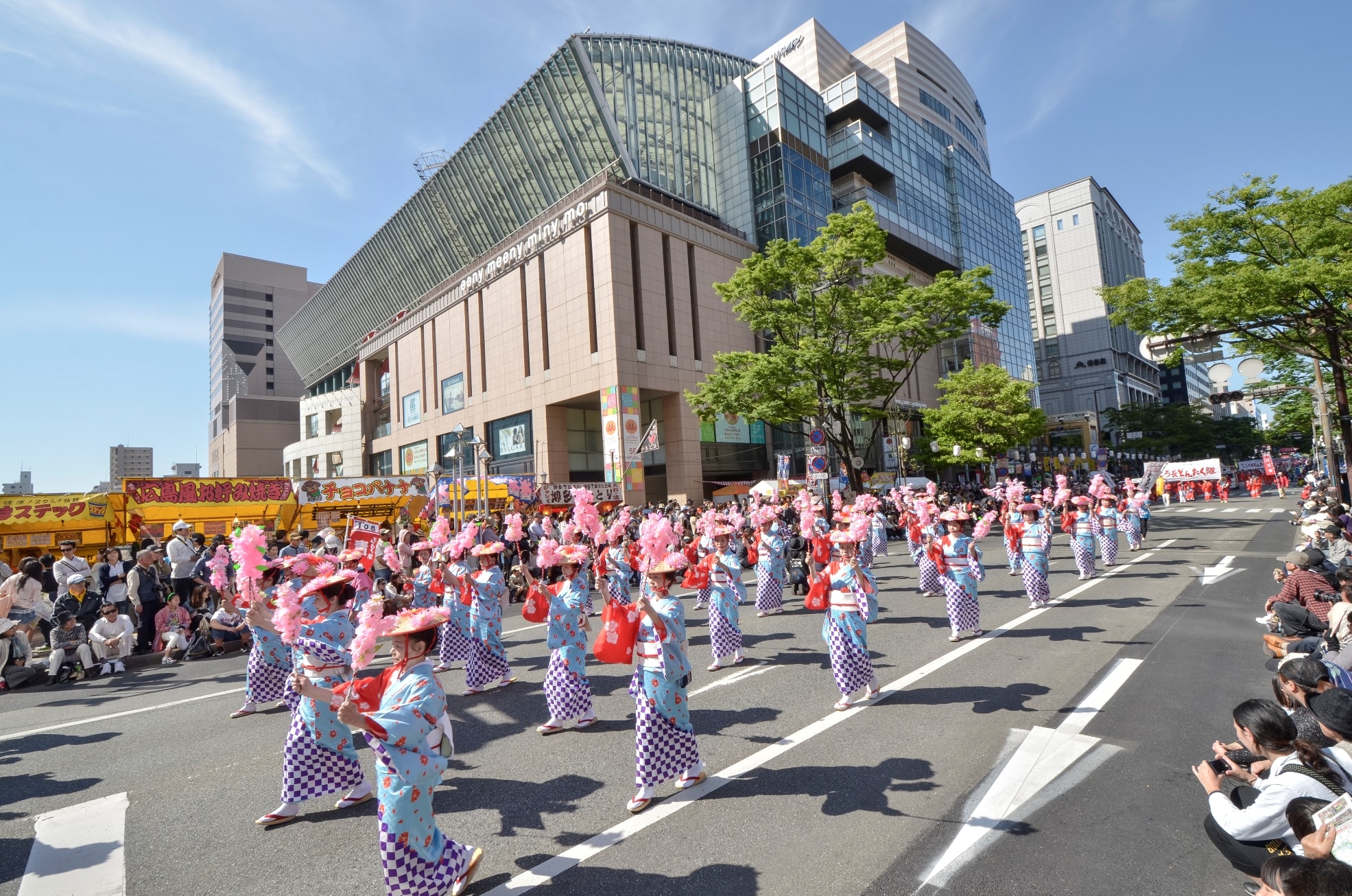 “Torimon” is a term that represents “dancers” which you could probably have understood from this article! However, do not confuse it with the term “Hakata Torimon” in Fukuoka. This term represents “manju” which is a traditional Japanese sweet steamed cake. It is made with a mixture of sweet white bean paste. It is one of the best selling souvenirs, so don`t miss your chance and try this traditional dessert during the Hakata Dontaku Festival! 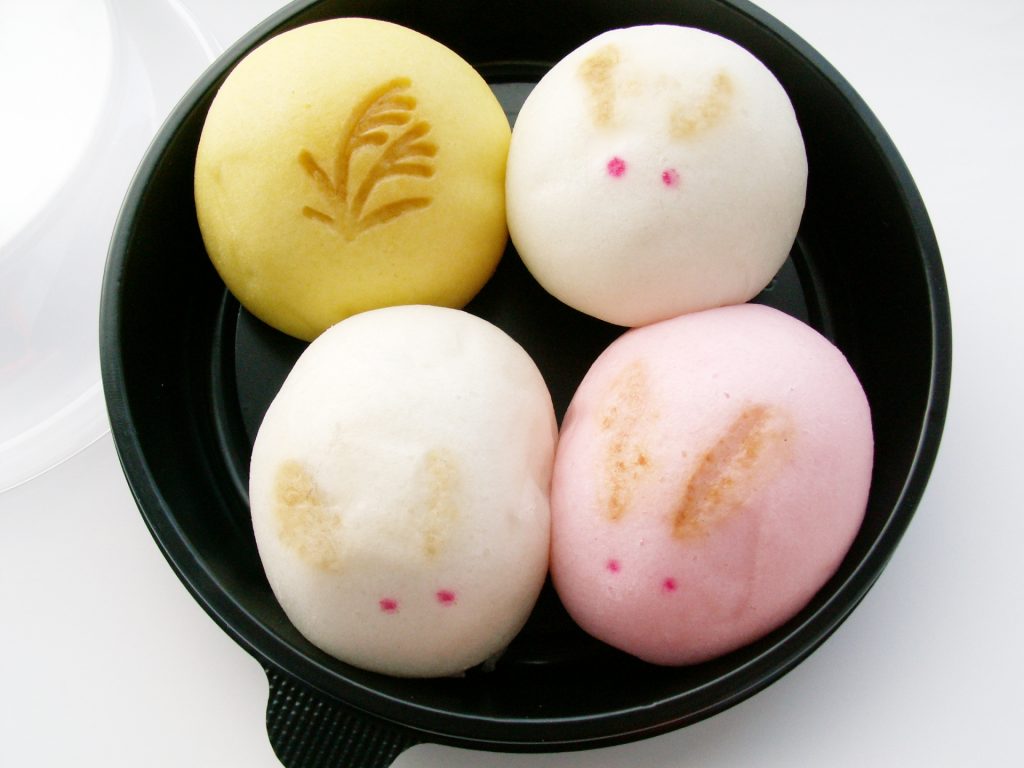 You will definitely be using Hakata station when you are in Kyushu in May. So here is a small article that tells you what events near Hakata station you can see in spring!

We have guides ready and available to take you around during the festival dates and give you insider experience of things that you can do in the area. Connect with your guide by clicking on a link below!

Traveling Around Fukuoka? Check out These Outstanding Events and Places! 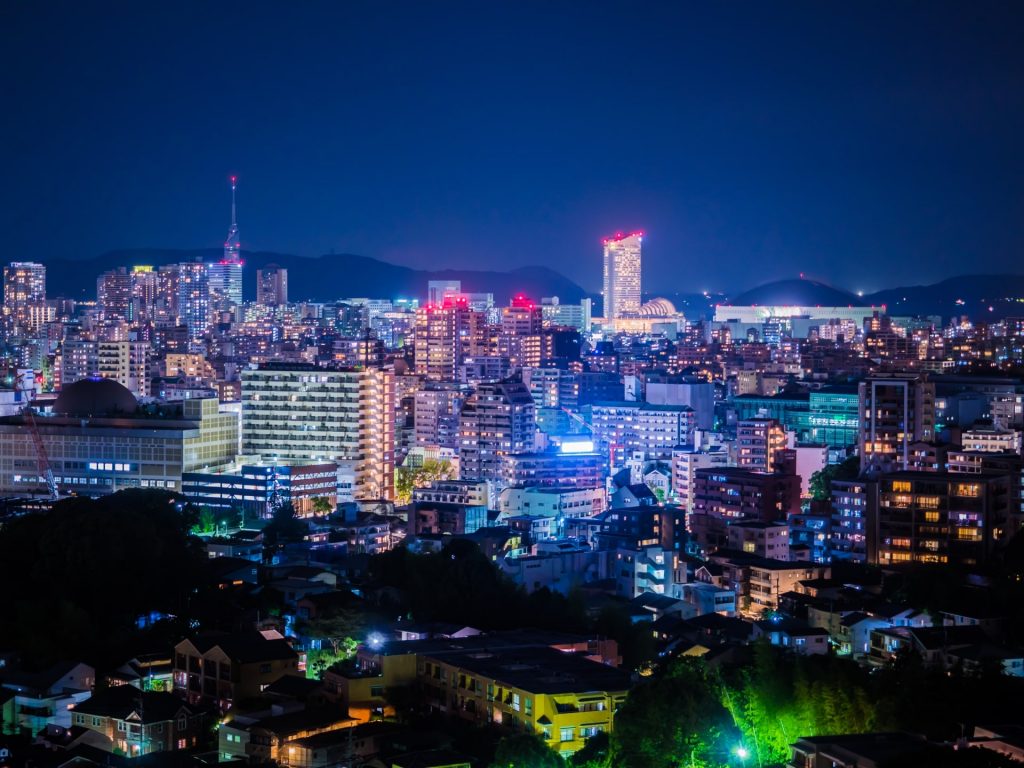 Fukuoka prefecture is super lively prefecture among all other areas in Kyushu. People, here are very open and friendly. On top of it, the local food tastes incredible! Either you are looking for some exceptional cultural experience through attending festivals and visiting historic sites, or you enjoy chilling in nature, Fukuoka Prefecture has something to offer anyone who decides to visit it. The following article will introduce you to the most popular events and attractions of  Fukuoka Prefecture. Please check the link below! 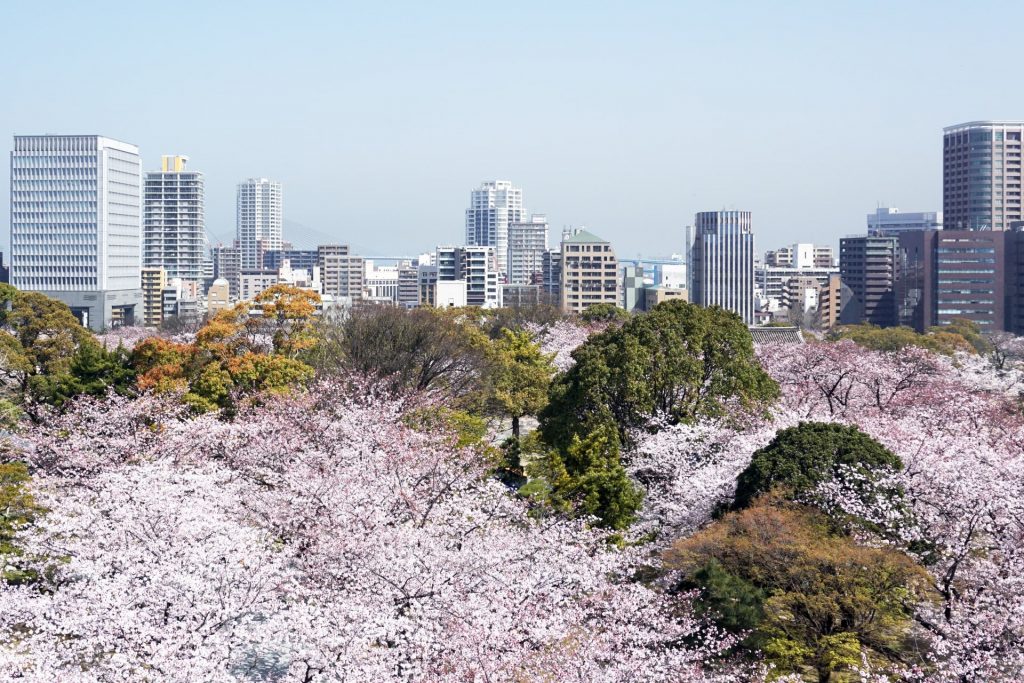 Being one of the largest cities in Japan and the biggest in Kyusyu, Fukuoka attracts a lot of visitors as well. Besides, Fukuoka is one of the most comfortable cities to live not only in Japan but in the world as well. No wonder so many people visit this tranquil city in spring to see mesmerizing cherry blossoms.  However, it boasts many exciting events that represent Fukuoka’s current “freshness and vibrancy”. The following article picked up the most attractive and must-see events in Fukuoka this spring. Please take a look! 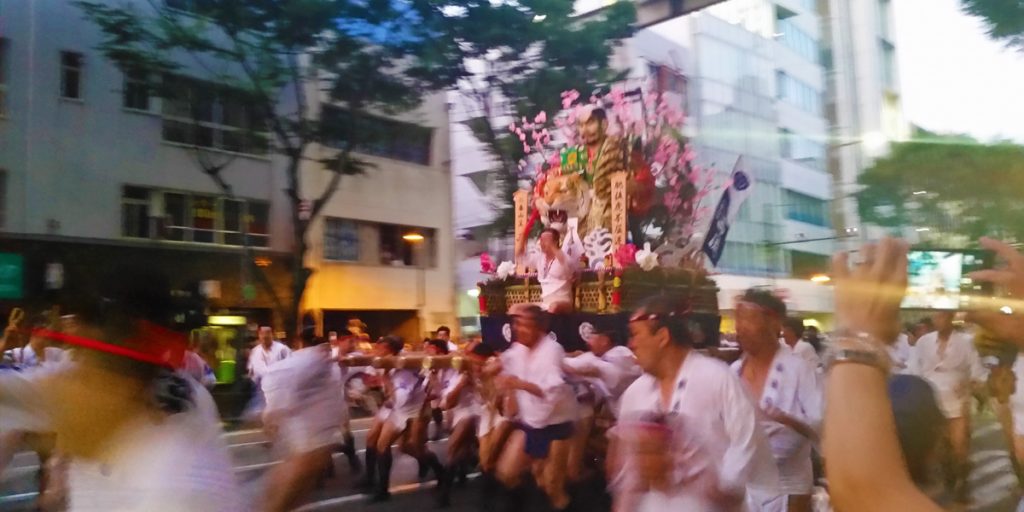 When you are in Kyusyu, you should definitely pay a visit to Fukuoka and see the manliest Japanese festival in July. It is a Hakata Gion Yamakasa Festival. This festivity is also worth attending besides, it is one of the most popular festivals of this region. And as you could have guessed from the name of the festival, you will be able to see a lot of beautiful and traditional floats and a lot of strong Japanese men in traditional costumes. For more information please check the link below.

A lot of people when they get to a Matsuri for the first time feel a bit lost. They confuse about what is happening around. If you are new to Japanese Festivals or just want to know an alternative way of how you can enjoy these events, the following article will provide you with a set of helpful tips on how to choose a proper festival and activities you should definitely try there. Please don`t hesitate to take a look at it!