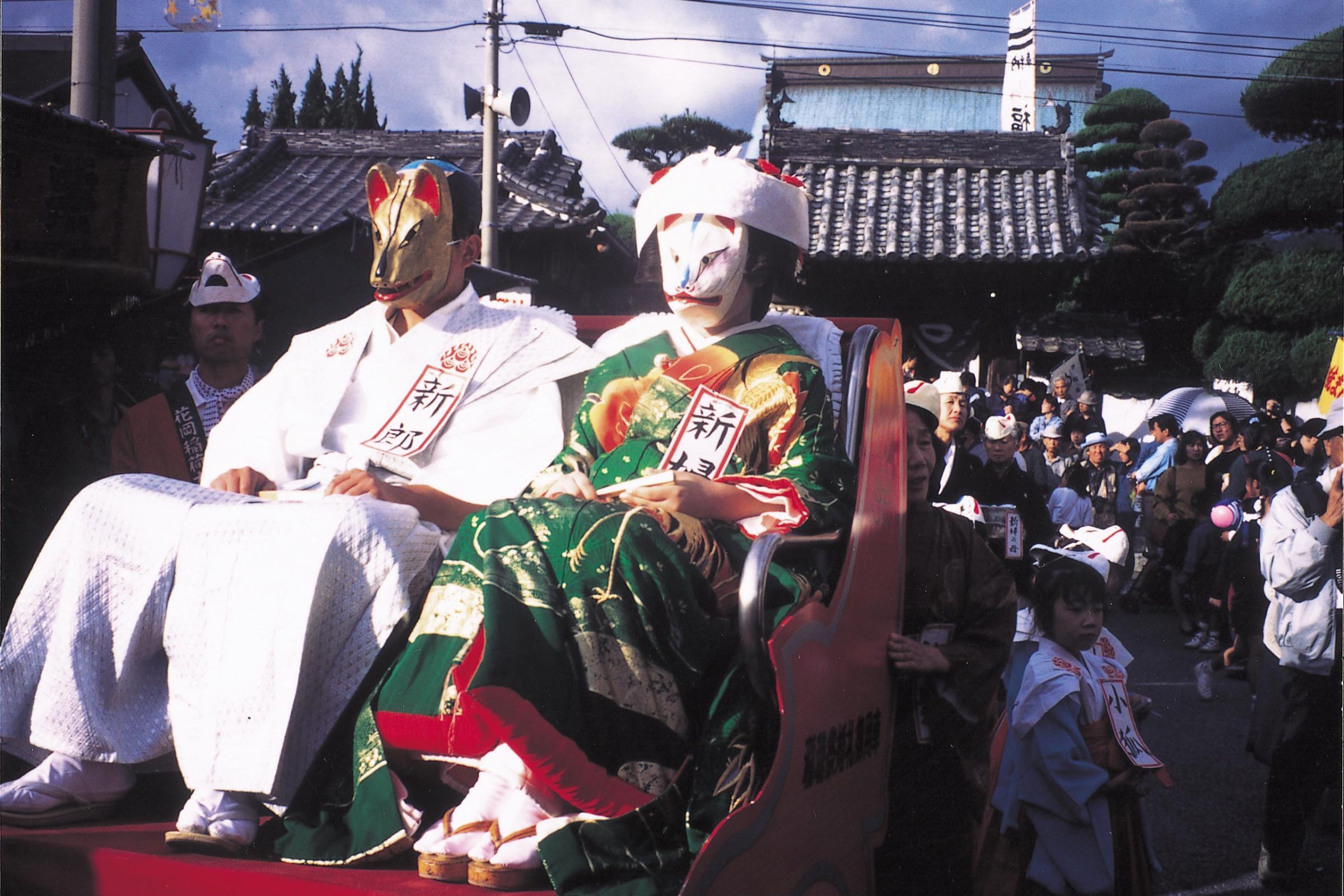 In this article I would like to introduce you Inaho Festival famous for Fox Wedding Parade. Inaho Festival takes place in Kudamatsu city of Yamaguchi Prefecture. You will know more about this unique custom and see how you can enjoy this annual event from this article.

Kudamatsu city is located in the southeastern part of Yamaguchi-ken Prefecture with about 55,000 population. It has a harbor, which is an international hub, and the trade with Korean Peninsula keeps on going since old days. 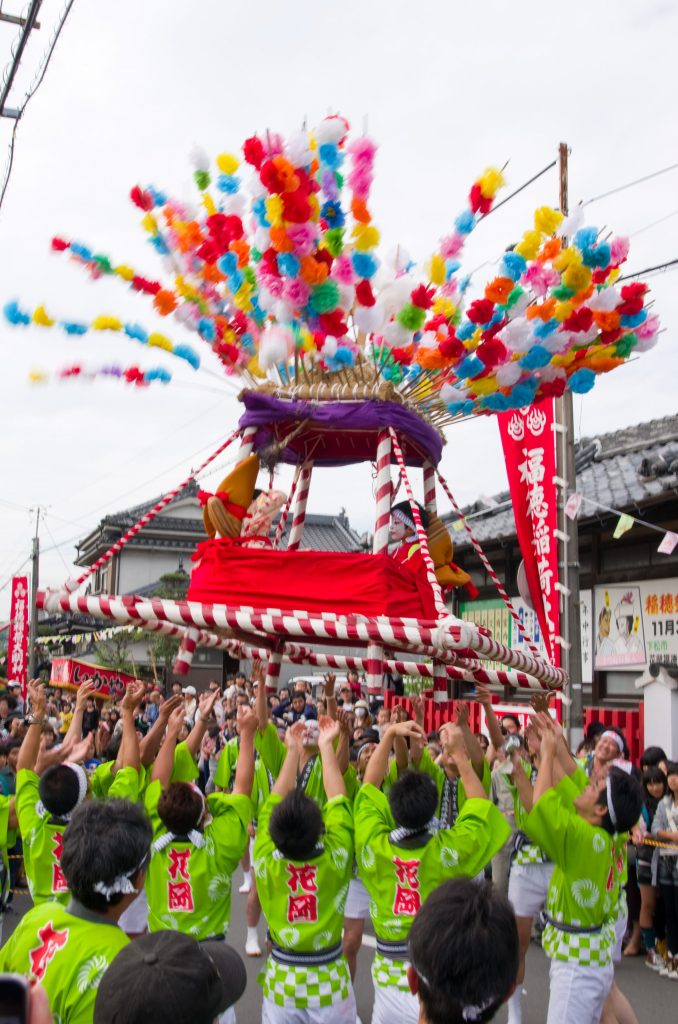 Kudamatsu is blessed with nature, and is planning to be a town full of flowers and greens. This city was always in the best 20 or best 30 in ”comfortable to live” cities in the past.

Inaho Festival of Kudamatsu city is a festival to pray for fertile, bumper crops and business prosperity. It is held annually on November 3rd.
People pray in the shrine at Hanaoka Fukutoku Inarisha and in Horyuji temple. 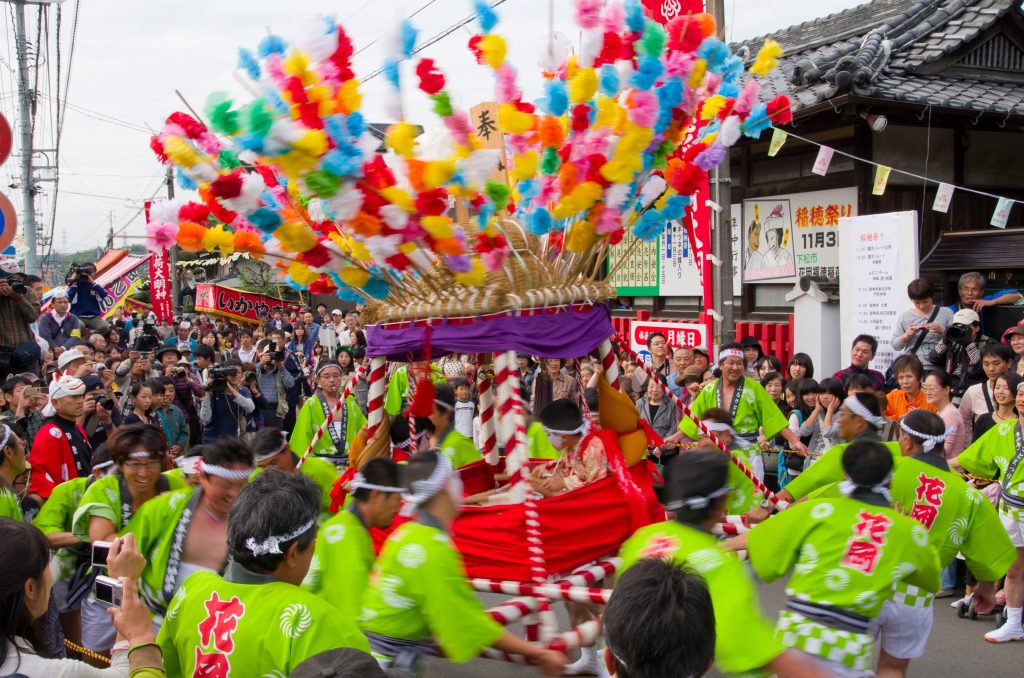 You can watch beautiful Mikoshi (portable shrines) and Dashi (parade floats) during the festival. You can also try various Yatai (mobile stalls) at the event. For example: Mochimaki (rice cakes), Fukubiki (lottery game), and many other festival foods are waiting for you.

A different and unique point here is that there is a parade called “Kitsune no Yomeiri” taking place during Inaho Festival. “Kitsune no Yomeiri” means “Wedding Ceremony of a Fox Bride” literally. The bride and the groom wearing fox masks parade on the festival day. Bride`s and groom’s relatives and neighbors also wear fox masks. 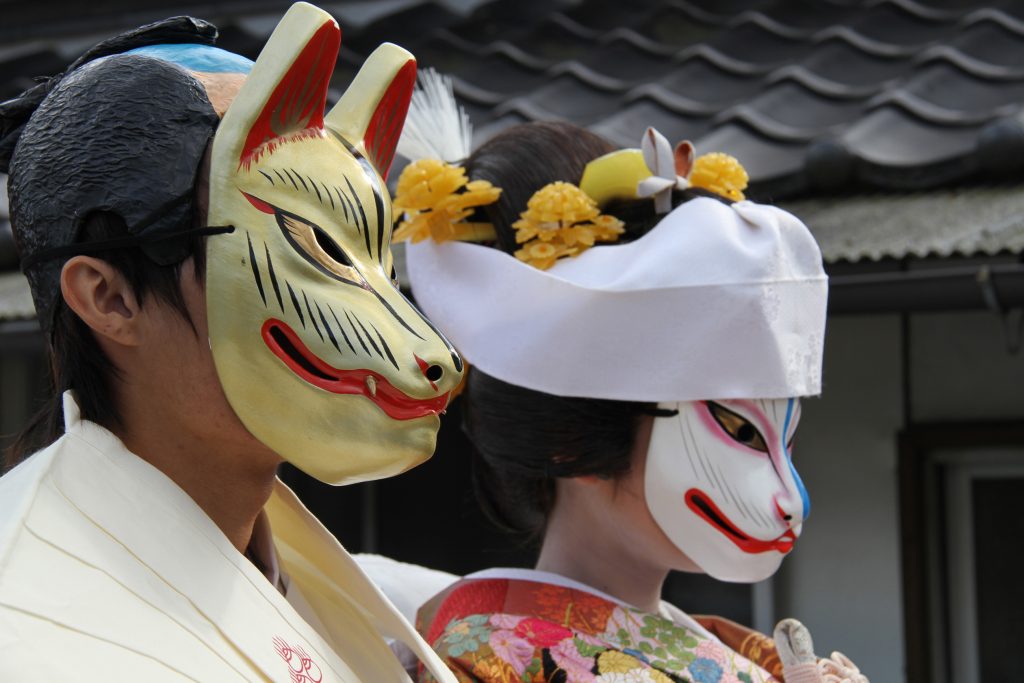 Why Do People Worship Foxes Here?

According to a legend, there was a chief priest in Hory-ji temple.
He was known as the person who had high virtues and was loved by people.
One day, he went out, and the on the way back to his temple, he noticed that his rosary (praying beads) was missing. He tried to look for his praying beads, but he could not find it in the dark. He could not do anything and slept in his bed. 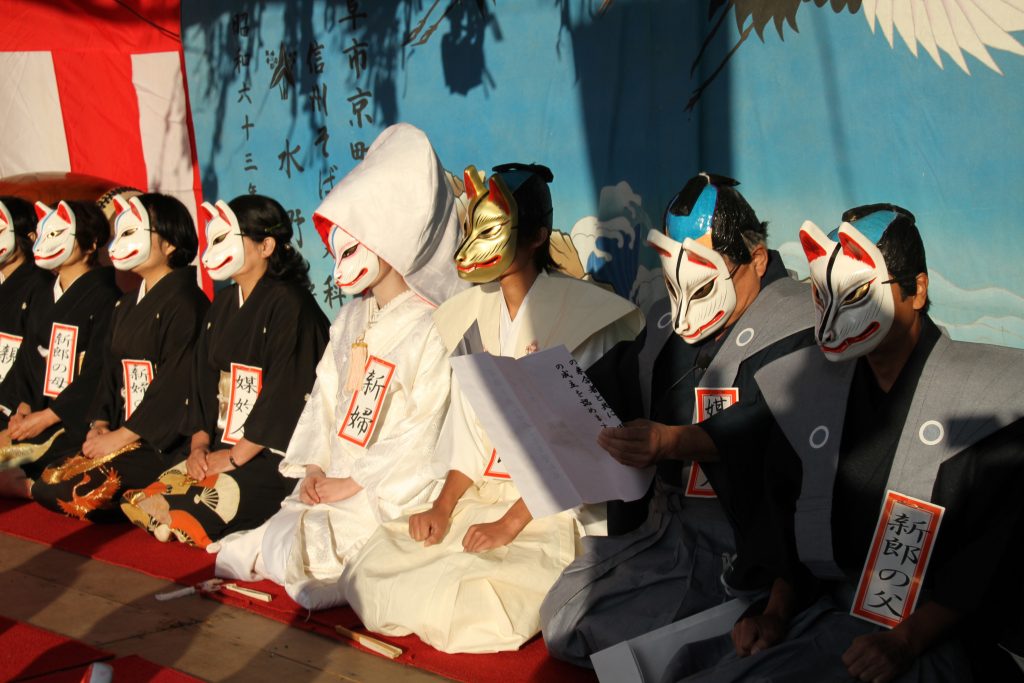 When he was sleeping, a white fox appeared in his dream. The fox said to him:

“We are a couple of white foxes who were dead in woods, we will bring your praying beads back to you this evening, if you take our corpses back to your temple and bury us in the same way as human beings. We also promise you to protect the people of your temple and village from misfortune”.

The priest woke up soon.
Surprisingly, there was the rosary he lost by the pillow. After that, the priest found corpses of white foxes, and buried carefully. Since then, people who are looking for something, or who lost something, have been coming to pray here. And actually many of them found what they were looking for. 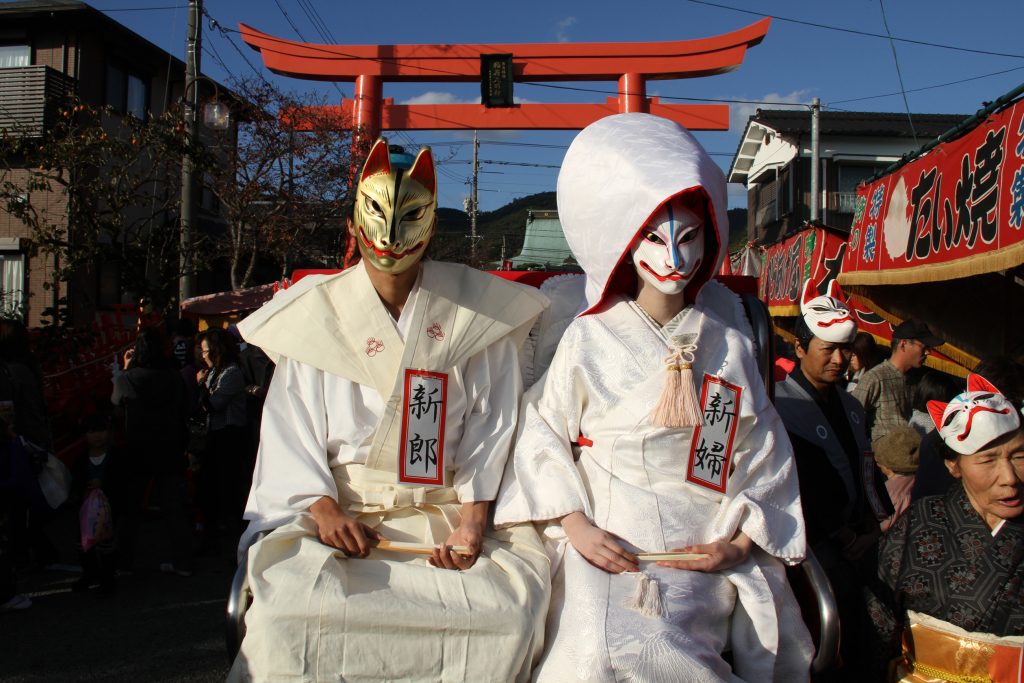 “Kitsune no Yomeiri” a Fox Wedding Ceremony at Inaho Festival

The organizers started holding Kitsune no Yomeiri as an event and Shinto ritual at Inaho Festival from 1950. People who wear fox masks walk at the old street slowly to the final destination – Hanaoka station.

Fox bride and groom ride on a Jinrikisha (a pulled rickshaw), and relatives and attendants dressed in the crested kimono – hakama follow and walk after a Jinrikisha.

Jinrikisha is a two-wheeled vehicle which is pulled and run by a rickshaw driver.
It had been used widely in Japan before an automobile was invented. 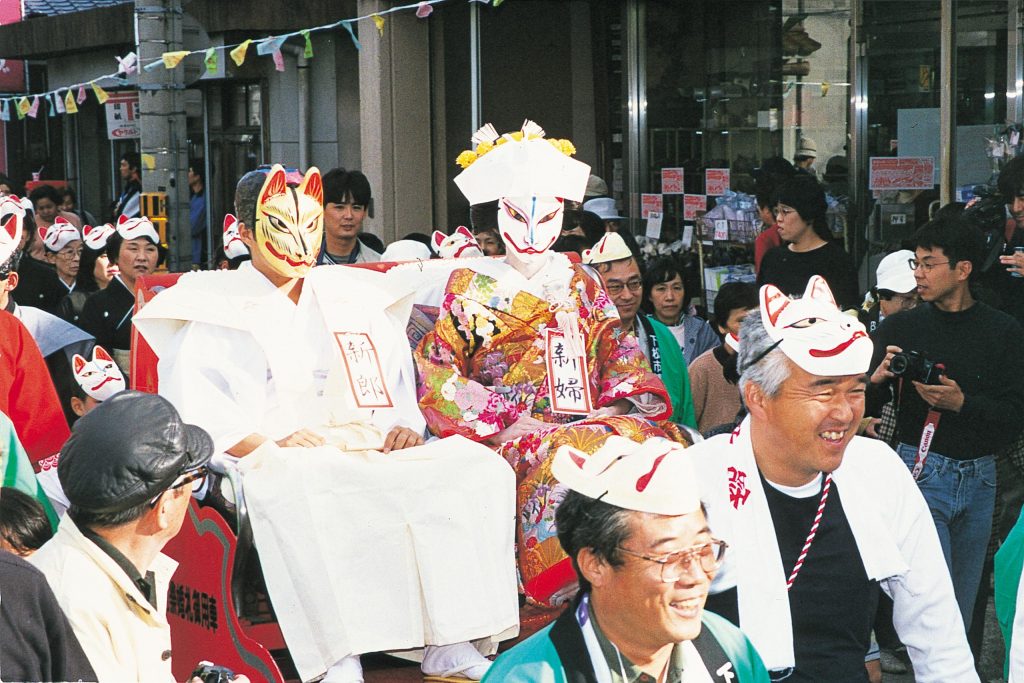 “San San Ku Do” is a ceremony between bride and groom, where they sip sake three times from three sake cups. The sizes of three cups are different. One is a small cup, another is a medium cup, and the other is a large cup.

・Small cup stands for the past.
Drinking from a small sake cup intends to express thanks to ancestors who gave the chance for a couple to meet.

・Medium size cup means the present time.
Drinking from this one stands for the intention of the couple to live together for a long time and helping each other.

・Large size cup means future.
By drinking from a large cup, the couple hopes that both families will be happy in the future with prosperity of both families’ descendants. 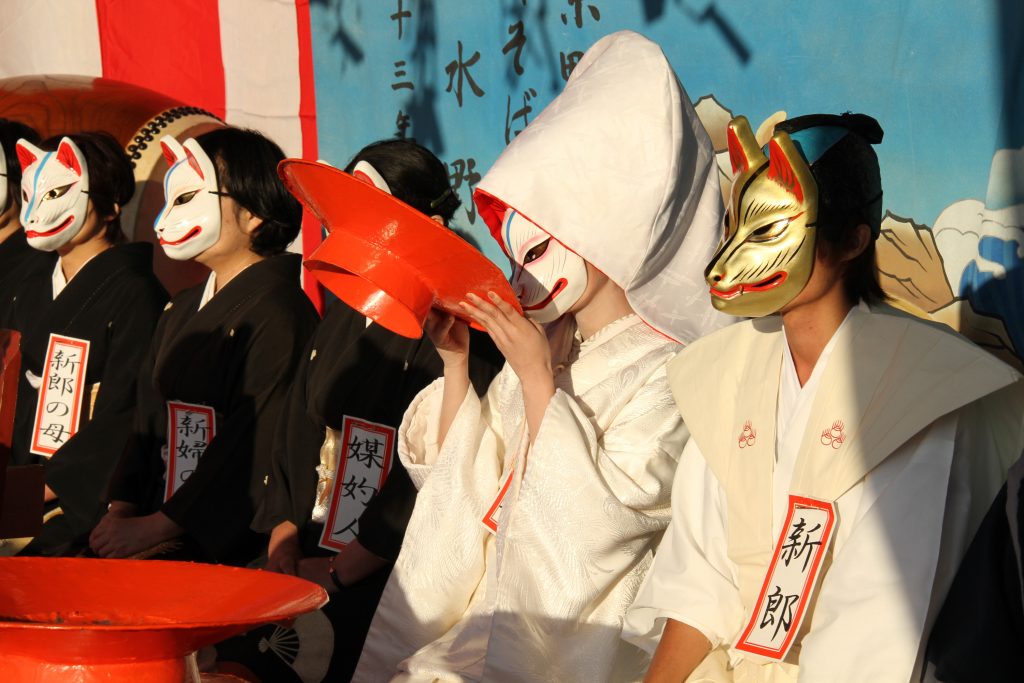 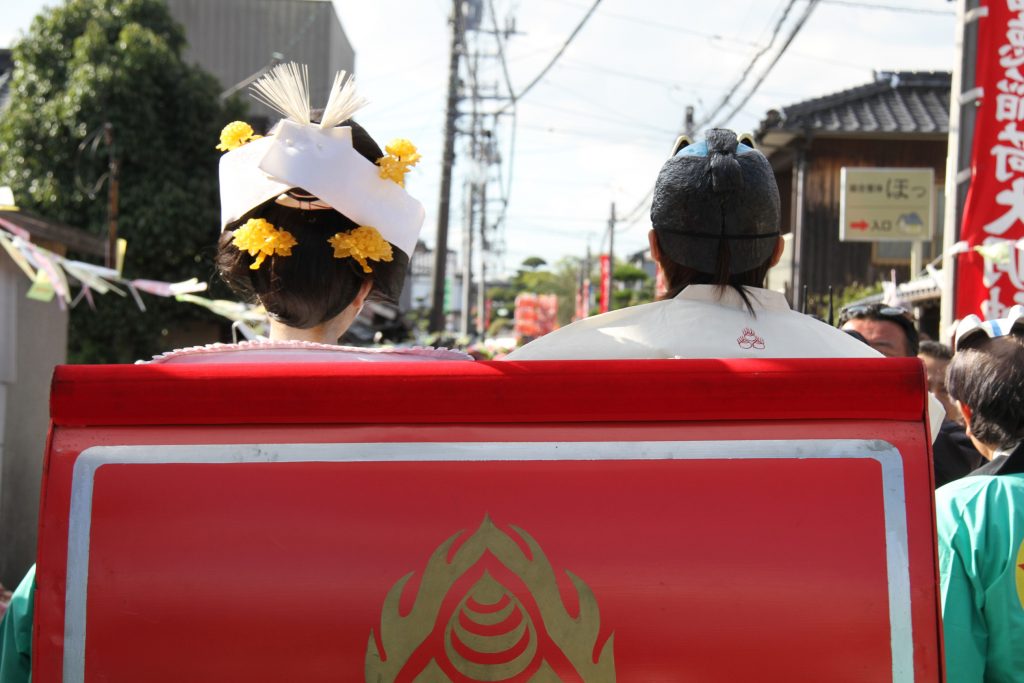 The public never knows who play the roles of foxes’ bride and groom.
According to a legend, it is said that a person who became a fox bride will find a good partner to get married.

Such event and ceremony as “Kitsune no Yomeiri are very rare in Japan. So, I highly recommend you to visit Hanaoka Fukutoku Inarisha and watch this ceremony.