November is a great month to enjoy the beautiful autumn colors in Japan. It is also the month when Christmas lights start appearing at places like theme parks, buildings, and trees in the cities, and even on private houses. Some of these locations are well-known for their fantastic displays. They have become sightseeing spots during the festive seasons.
One of such places is Midosuji Avenue with it’s annual “Midosuji Illumination” event in Osaka. Not only the 4 km long road is decorated with Christmas lights, but projection mapping and illuminations using imaging techniques and lighting design are also a feature that creates a dramatic and fantastic festival of lights. 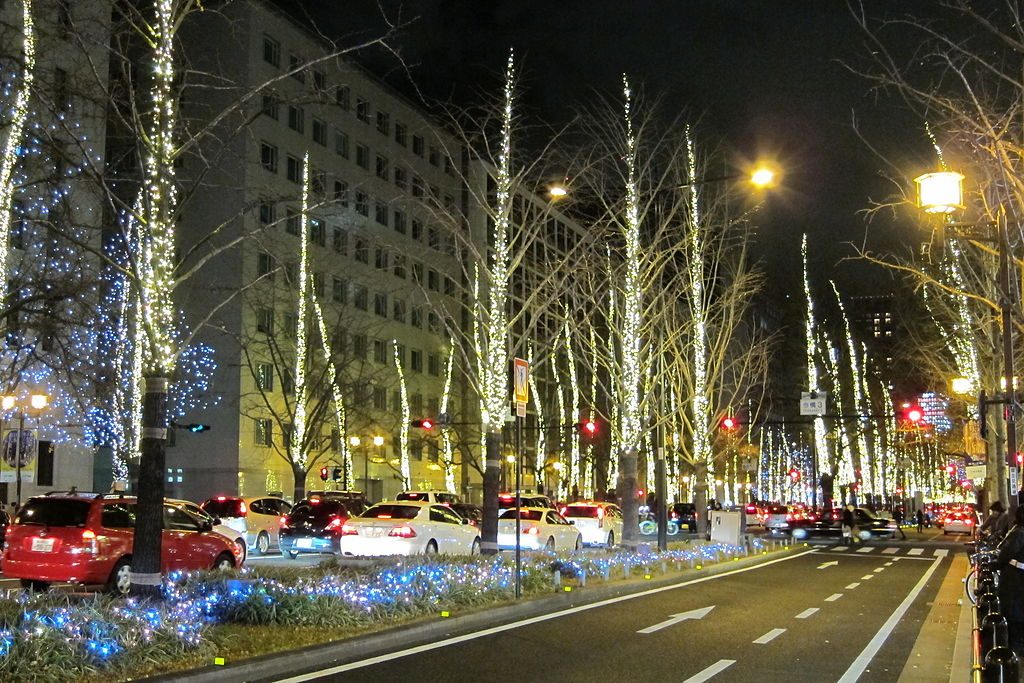 Midosuji Avenue runs north from to Namba Station up to JR Osaka Station through the center of Osaka city. Being the business district, on both sides, you will notice numerous tall buildings housing banks, trading companies, and company offices as well as a long row of stunning yellow ginkgo trees. As November arrives, all these trees are decorated with lights making Midosuji Avenue the World Record holder (in 2015) as the most roadside trees illuminated. The Midosuji Illumination event is a part of the “Festival of the lights in Osaka” and the theme of the display and the precise period change every year. Generally, it takes place from the beginning of November to the end of December. In 2018 it will take place from November 4th to December 25th and the illumination time is from 17:00 to 23:00. The theme of 2018 is “流,” which means “Flow.” Osaka is called “the city of water.” alto resemble the theme, 4km of the Midosuji Avenue are decorated as an amazing river of lights. Some parts of Midosuji are illuminated in blue and yellow whilst others are illuminated in pink and purple.

On an opening day, part of the road becomes a car-free zone allowing you to walk around freely and enjoy the extraordinary scene. This opportunity is only for one day so be sure not to miss it.

Other places to see

As well as the main avenue, there are other places where the decorative lights give the impression of shimmering on the water surface and suggesting the flow of water. Ripples are reflected with lights on the pavements from Chuo Odori street along to the Kitamido temple. By reaching the temple, you are rewarded with the magical dynamic image of “Framework Light Ups.”

It is an illumination event using projection technology and lighting design. “Framework Light Ups” in Kitamido is the first to take place! The building’s frame features illumination to highlight its architecture and projections turn the front steps into a flowing waterfall of light. You can see projection mapping in conjunction with the “Framework light up” too. The images and lights of the projection mapping interact with your movements. There is one more thing that makes the temple look fantastic. It is a five-color fiber-optic curtain at the entrance of the temple.

Of the various buildings featuring displays along Midosuji Avenue, the Umeda intake towers particularly stand out. Thanks to the collaboration of various lighting equipment companies, you will have a great chance to admire the bright winter night sky of Osaka, as the whole is celebration of a stunning Festival of Lights. It should be on any visitor’s `must-see list! What is the “Festival of the Lights in Osaka”?

The other core program is Osaka Hikari – Renaissance. It takes place around Osaka City Hall and Nakanoshima Park. Nakanoshima is the area between the Dojima River and the Tosabori River. Every year Osaka City Hall, Osaka City Central Public Hall, and Naoaknoshima Library are lit up using amazing projection mappings and wall tapestries. Osaka City Central Public Hall is a historical building designated as a national important cultural property. In 2018, it celebrated the 100th anniversary of its opening. For this big celebration, the Hall featured the illumination with colorful and dazzling wall tapestries.

You can also enjoy “Naknoshima Illumination Street,” which is a 150 m zelkova tree-lined street. It looks like the tunnel of lights.
There is a rose garden in Nakanoshima Park. The west side of the garden has a Taiwanese lantern festival. About one thousand lanterns with colorful designs create a charming and mystical atmosphere. Area programs have many events taking place all over Osaka Prefecture. It’s very hard to describe all of them in one article so I would like to tell you about “Nakanoshima West Winter Story.” It takes place in Fukushima (Hotarumachi) Port and the Dojima River in front of the port. You will see a spectacular water entertainment show there. A 10 m high waterspout rises from the riverside, and Tamaebashi bridge boasts an outstanding illumination along with the music. There are boats called “Symbol Ships” that provide you with a great view of the show, and they also feature colorful lights. They run from Fukushima (Hotarumachi) Port and take a tour around Nakanoshima. International Reception and Info: “Tourist Information Osaka” is on the 1st floor in JR Osaka Station. There are members of staff who speak English, Chinese and Korean.

Access: There are many stations near Midosuji Illumination. The main stations are
Umeda Sta., Yodobashi Sta., Honmachi Sta., Shinsaibashi Sta., and Namba Sta.

Some historical buildings on the Midosuji and in Nakanoshima are sightseeing spots. I recommend you visiting there or taking an open-top double-decker bus tour in the daytime. The audio guides for the tour are available in English, Chinese and Korean. It will be fun to see how the illuminated areas are different in the daytime.

If you would like to discover Osaka together with a local guide, please check the banner below!

What You Can Do in Osaka Osaka is the third biggest city in Japan that is well-known for its citizens who have a fun-loving and laid-back attitude to life. This port city is a metropolis of Kansai region that boasts a great history of the merchant capital of Japan. In the 80s of the 20th century, Kansai area and Osaka in its heart were producing 5% of the world GDP, before Chinese cities overtook the initiative. This city is a birthplace of many common Japanese dishes, world-known sightseeing spots, and powerful festivals and events that attract hundreds of thousands of spectators from all over the world.

See How Tokyo Glows This Winter! If you are travelling in Tokyo this winter, you should not miss the exciting illumination events that turn the city into a winter wonderland. Many popular places in the central part of the metropolis turn into fairy tale scenes with its unique and unforgettable atmosphere at the end of the year. Feel the Christmas mood, enjoy mulled wine, and see how Tokyo transforms during these cold days. The following article picked top ten illumination events in Tokyo this winter, URL:https://festivalgo.huber-japan.com/events/events/tokyo-winter-illumination-events