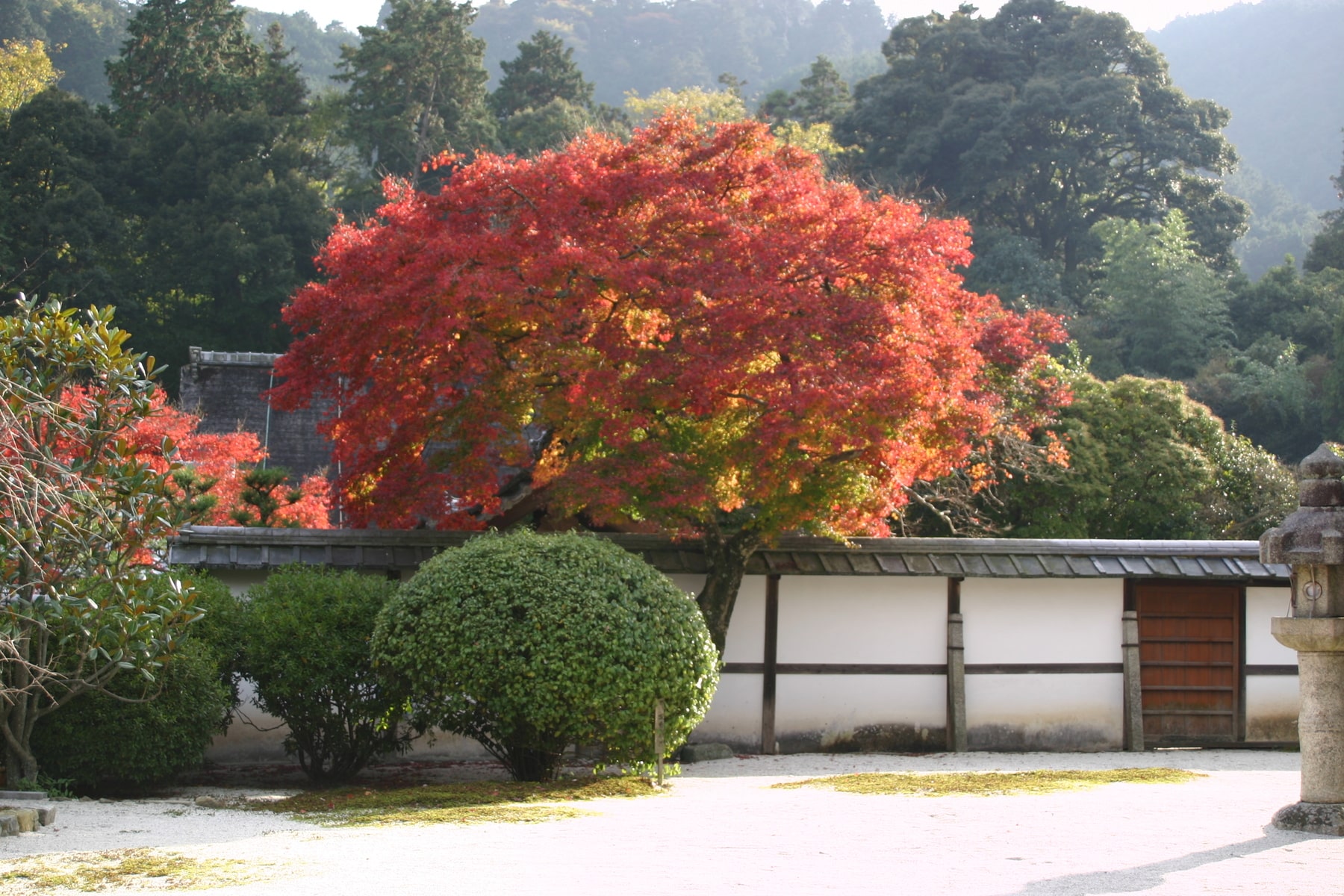 Plan Your Trip to Biwa Lake to Enjoy Momiji at Miidera Temple in 2018! Miidera is one of Omi Hakkei, known as Mitsui’s late bell, and also known as the landmark of autumn leaves. The temple’s official name is Onjoji. It stores about 100 national treasures & important cultural assets and boasts a long history. The first thing you see at the entrance gate is beautiful red leaves – Momiji. As you pass the gate, you see a leaf tunnel that takes you further in the temple. When you pass the tunnel and climb on Kannondo, you have a panorama view of Biwako lake. Colorful leaves are lit up in the evening for about 2 weeks in November. You will get to enjoy a different view of the temple and the nature around it at this wonderful autumn time. The temple was built in 672 by Otomo village owner after Jinshin war which was a succession dispute in Japan which broke out following the death of Emperor Tenji. In 1041, by Court, question whether Miidera should alter arose. Only Enryakuji temple representatives opposed. However, after a long time, the issue became the source of the conflict in the area. In 1081, the temple was burned by Yamato mon Shu (one of the religious groups). In 1084, Kondo (the main hall of the temple) was built. But then, in 1121, miidera monks started murdering Enryakuji monks. Thus, the crowd burned the tower of the miidera and the temple turned into ruins. From 1134, the service was held at the temple. However, the temple was burnt repeatedly, getting rebuilt and having the service again until 1689. At that time Japan became a Sakoku (closed country) between 1639 to 1854. This means that the country could not get any influence and import/export from outside of the country. In 1885, Ernest Fenollosa – American art historian of Japanese art joined and practiced the religion at Miidera. Fenollosa was cremated at the temple after his sudden death during his trip in Europe. Legendary Stories Behind the Temple

With a long history of the temple, there are multiple legendary stories which still exist. One of the famous stories is the secret status of the honor. Miidera’s main honor is Miroku statue which is in the main hall. It is said that this honored Buddha statue was given by Emperor Tenmu when the Miidera was founded about 1,300 years ago. But since it has become an absolute secret, no one, even the people who worshiped, has seen the statue. According to the temple, this statue is a spiritual Buddha transmitted from the Three Kingdoms. The locals say that the statue came when Miroku Buddha, who was descended and altered as a statue, at the time when the Chinese Tendai sect trained at the establishment. Then, the legends say that this statue always emits light and stays warm like it is a living Buddha. Despite many fires at the temple, being able to protect an honorable place was a matter of miracle.

Special Local Dishes You Should Try

Shiga is known for Omi beef. It is the oldest Japanese beef brand. The history of Omi beef dates to the Edo period. There is an anecdotal story saying that “Ii Naosuke (a famous Japanese politician in Edo period) was assassinated outside the Sakurada Gate because he did not take the Omi beef offer from the government which they were really looking forward to”. As a result of the activities of Omi merchants and the hardships and efforts of producers in the Meiji period, currently, Omi beef spread all over the country and became a famous brand. You can try it at most of the restaurants in the area.

If you want to try something very specific to the Biwako area, try grilled mackerel somen noodles. Originally, the dish was served at home, but many restaurants started serving it for tourists these days. If you are into sake, Shiga prefecture currently holding about 50 brewers, which makes it a rich prefecture in terms of producing sake. Shiga Prefecture is a famous rice-producing region. Besides, there is also much fresh and tasty water from Biwako lake… Thus, there is the reason for the delicious sake to be born! Dates: The light up event takes place every year from the middle to the end of November depending on the weather and leaves condition. In 2019 the estimated term of the light up event is from 17th November to 26th.

The temple is located in about 10-minute walk from the closest train station, Keihan line, Miidera station. Also, it is a 5-minute ride by bus from JR Otsu line, Otsu-Kyo Station.
If you have a car, there are plenty of parking lots on the site. It is about 10 minutes from Meishin Otsu InterChange.

Japanese people enjoy all four seasons by viewing the nature. Autumn foliage shows the beautiful season of fall every year. Many people go hiking to see the colorful leaves. At Miidera, on the top of colorful leaves, you have an extraordinary chance to enjoy the view of Lake Biwa.
If you would like local guides to help you with your trip planning or accompany you while you travel in Shiga, please check the banner below!