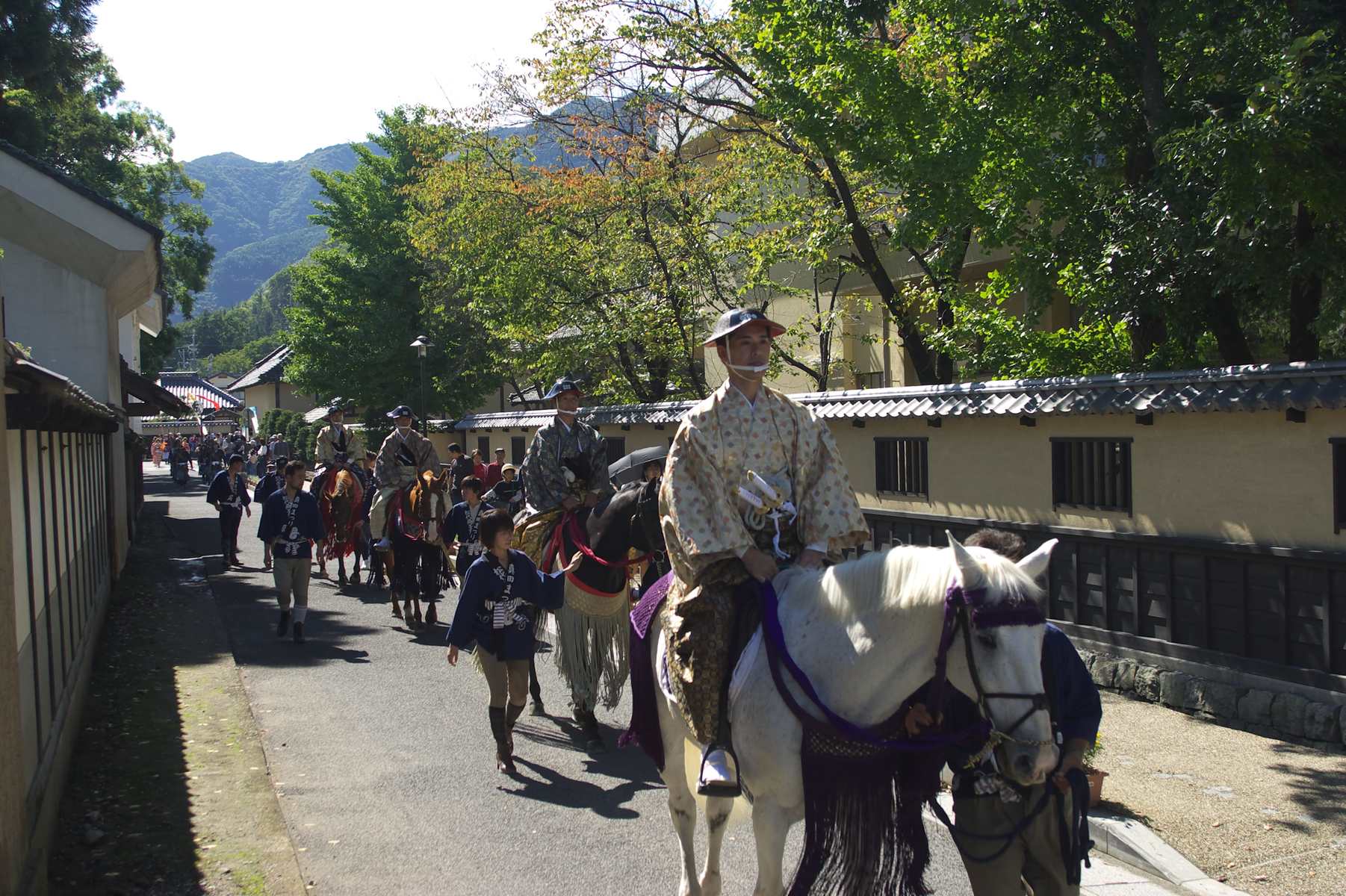 Sanada Jumangoku festival is an outstanding event for everybody who wants to feel themselves in the atmosphere of old traditional Japan. Taiko performances, artillery displays, and traditional dances are held at the castle before a procession of the clan warriors parades through the gates of Matsuhiro castle. This is a perfect event for all Japanese history lovers and those who want to take great pictures!

Matsushiro (松代) town is located in Nagano City in the northern part of Nagano Prefecture. Many people remember that this city hosted 1998 Winter Olympics and Paralympics.  Matsushiro used to be claimed by powerful daimyo (大名:provincial landlords) during the age of provincial wars in the second half of the 16th century. So, the owner of the land changed several times because its location was strategically important.

However, eventually it was rewarded to Sanada Nobuyuki (真田信之:1566-1658), who had played a key role in the brave Sanada clan. He became the first domain lord of Matsushiro Domain under the centralized feudal system newly established in the Tokugawa Shogunate. Even after the demise of Nobuyuki, the domain saw stable governance for about 250 years until the Meiji Period. 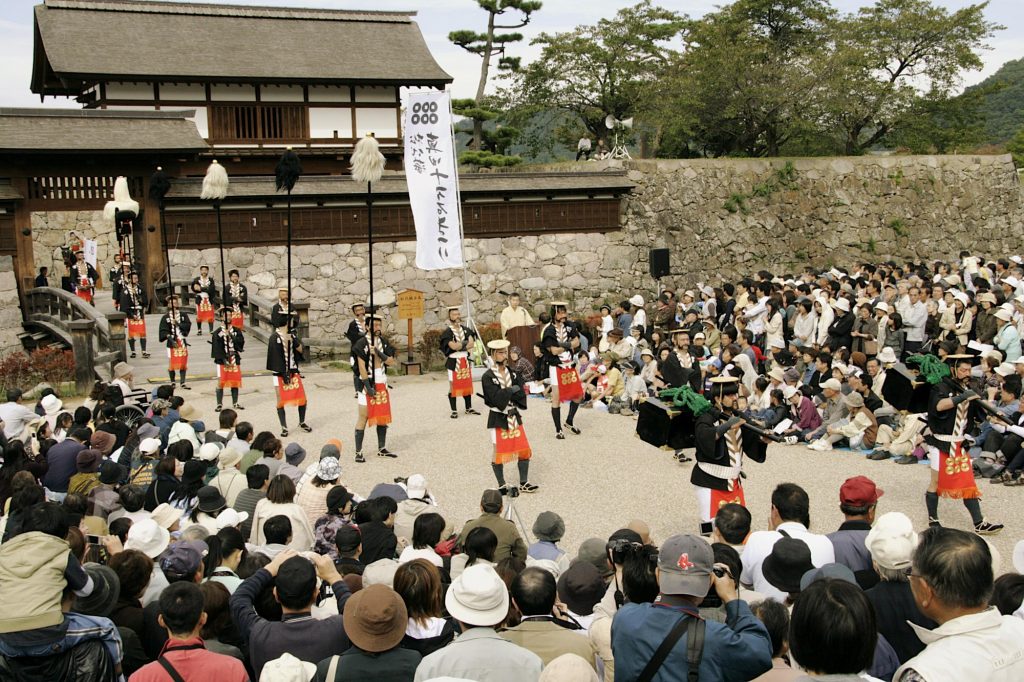 In the middle of the 16th century, coinciding with Japan’ Sengoku period, the Sanada served as key vassals of Takeda Shingen (武田信玄:1521-1573) – an exceptional daimyo who ruled Kai Province (currently Yamanashi Prefecture). Among them were three famous generals: Sanada Yukitaka (真田幸隆:1512-1574) and his sons – Nobutsuna (信綱), Masateru (昌輝), and Masayuki (昌幸).

After Yukitakas’ retirement, Sanada Masayuki (真田昌幸:1547-1611) led the clan. His second son – Sanada Nobushige ((真田信繁:1567-1615) known more as Sanada Yukimura)) was sent as a hostage to the Toyotomi (豊臣家). And later, he married an adopted daughter of Toyotomi Hideyoshi (豊臣秀吉:1537-1598) – the second unifier of Japan. That meant that he became Hideyoshi’s son-in-law.

On the other hand, Sanada Nobuyuki (真田信幸:1566-1658) – Yukimura’s brother, was married to Komatsuhime (小松姫) – an adopted daughter of Tokugawa Ieyasu, who led the Eastern Army at the Battle of Sekigahara in 1600 and fought against the Western Army led by the Toyotomi.

That is, they had to be forced into the situation they would have to draw their swords against their father and brothers! The Western Army, which Masayuki and Yukimura joined, lost to the Eastern Army. They were going to be beheaded but their lives were spared instead because of Nobuyuki’s joining the Tokugawa army. They survived in such a difficult time. 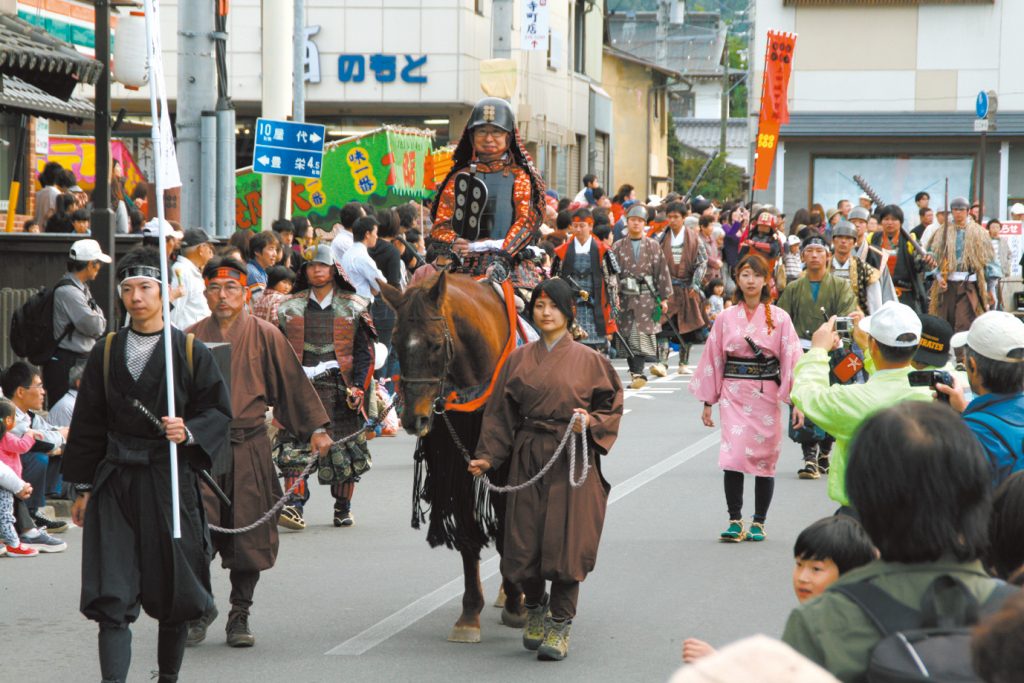 What’s the Festival for?

I can’t talk too much about the history of the Sanada clan. I must stop here and move on to the main topic – Sanada Jumangoku Festival. As you could figure out, local people in Matsushiro have been proud of the Sanada clan for generations since the Sengoku period. The festival, which started 63 years ago, gives the people a good opportunity to think of Sanada’s brave warriors and honor what they have done for their descendants and prosperity of the area.

The Sanada Jumangoku Festival takes place at Matsushiro Castle (松代城 Matsushiro-jo) on the second weekend of October every year. The castle once used to be called Kaizu Castle (海津城 Kaizu-jo) until 1711, then the name was changed to the current one. Once, the castle was burned down by fires, and seriously damaged by natural disasters at other times.   But each time the adversities befell, the castle managed to stand them.

On the first day of the festival, local people of all generations hold concerts or dance show performances on the special stage in Matsushiro Castle. Kindergarten children, school students, and even adults participate in the music and dance event (9:30-15:30). Some sing and others play band concerts and participate in other special performances. The enthusiasm of performers and the audience circulates around the venue.

The Jumangoku Festival’s main program – a special procession re-enacting the parading of samurai warriors in paper-made armor, starts in the afternoon (13:00-16:00). After the volley of traditional matchlock guns by a squad of people in “ashigaru (足軽 foot soldiers)” costumes and resounding taiko (太鼓 traditional drums) performance, the Jumangoku procession starts to parade. Jumangoku (十万石) translates as 100,000 “koku”. Koku is the measurement which was used to show how much rice yield a domain had, namely, to assess how wealthy the domain was. Matsushiro Domain enjoyed its rice production of 120,000 koku – reduced later to 100,000 koku when Sanada Nobuyuki settled in the domain. One koku is said to have a quantity enough to feed one person for one year. The samurai procession, which somewhat resembles the parading in Kyoto’s Jidai Matsuri (時代祭), marches slowly around the castle for about 3 hours.

Most people participating in the daimyo-gyoretsu (大名行列 daimyo procession) wear their handmade armors. To make a suit of armor for the parade, some people spend about half a year weaving colorful strings through the specially made paper. I have to take off my hat to their passion for the festival.

Other Things to Do at Matsushiro

Trace Back to Good Old Days under the Sanada Family

Near Matsushiro Castle there are three places to visit to enrich your knowledge about the Sanada family: Old Sanada’s Residence, the Sanada Treasure Museum, and the Old School for the Literary and Military Arts.

Old Sanada’s Residence is designated as a National Historical Monument. This house was built by the 9th lord of Matsushiro Domain – Sanada Yukinori as a retreat for his mother. The residence has a well-preserved garden with the zakan-shiki (座観式) style. It gives the visitors the sitting position from which the view of the whole garden can be best appreciated. Admission fee is ¥300.

The Sanada Treasure Museum (Homotsu-kan 宝物館) displays some artifacts donated by the Sanada family in 1960: samurai swords, armor, manuscripts, and furniture. Some documents of historical value were sent from Takeda Shingen, Toyotomi Hideyoshi, and Tokugawa Ieyasu. Admission fee is ¥200.

The Old School for the Literary and Military Arts (“Bunbu-Gakkou” 文武学校) was the school that advocated the importance of natural sciences and the martial arts, which brings an interestingly austere atmosphere to the school. Admission fee is ¥200.

A set of the tickets for ¥500 in total is available for all the three places. 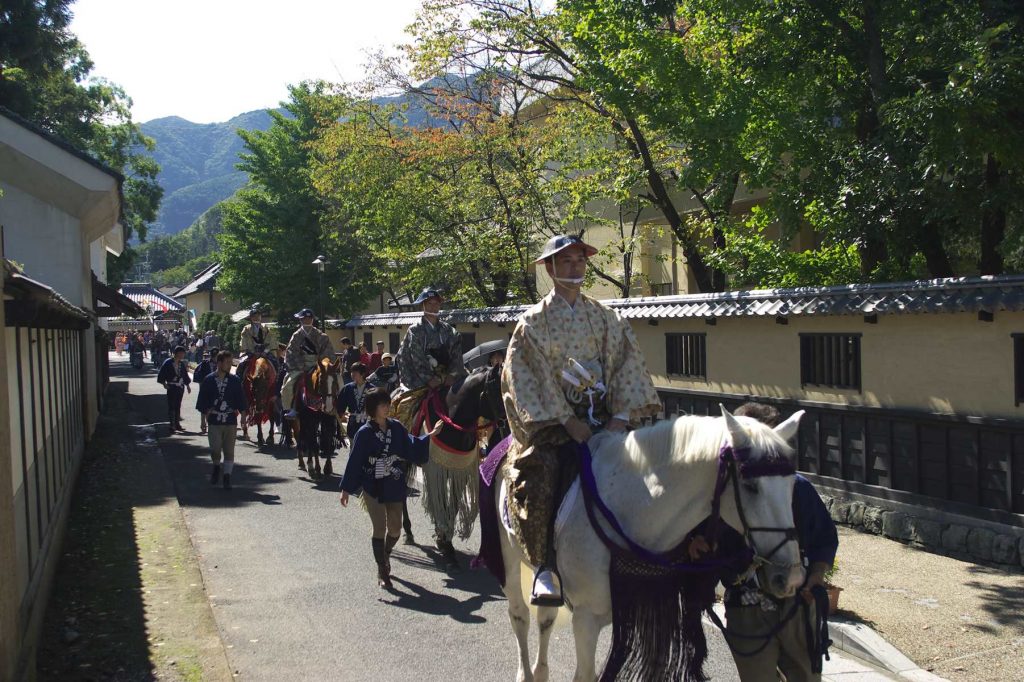 10-minute drive from Nagano IC on the Jo-Shinetsu Expressway

The Sanada clan was inherited by Sanada Nobuyuki after the Battle of Sekigahara. But the feud between Nobuyuki and his brother – Nobushige (Yukimura) started as the relationship between the Tokugawa and Toyotomi became tense till 1614, when the two camps crossed swords in Osaka. Nobushige, serving the Toyotomi again, was killed by his brother siding with the Tokugawa. This episode has been put into novels, TV dramas, and even mangas and is still enjoyed by many Japanese. How about being a buff of Japanese history?

If you would like a local guide to bring you to this festival and tell you even more about the Sanada clan and the area, please don’t hesitate and click on the banner below! 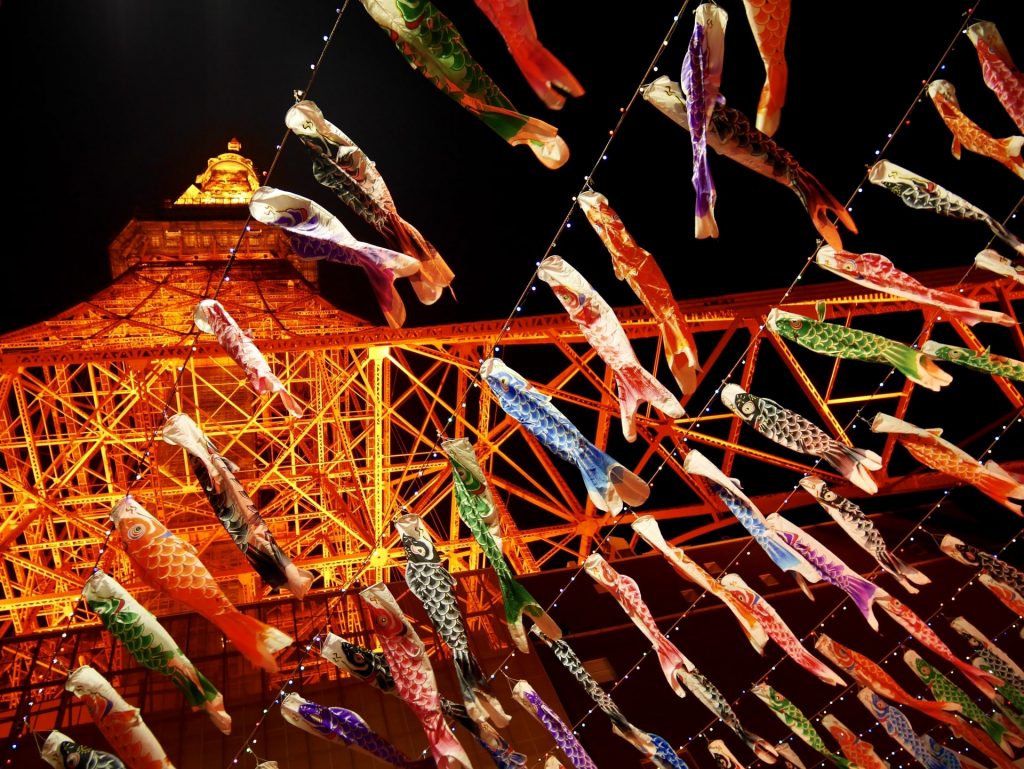 If you look at Tokyo from another angle, you will figure out that this is a city of festivals. Each part of the town has a local community with its traditions. And for Japanese people, it is essential to keep the sense of their community. Thus, you can see plenty of festivals almost every week in different parts of Tokyo. The following article will provide you with the best Tokyo festivals each month of the year!