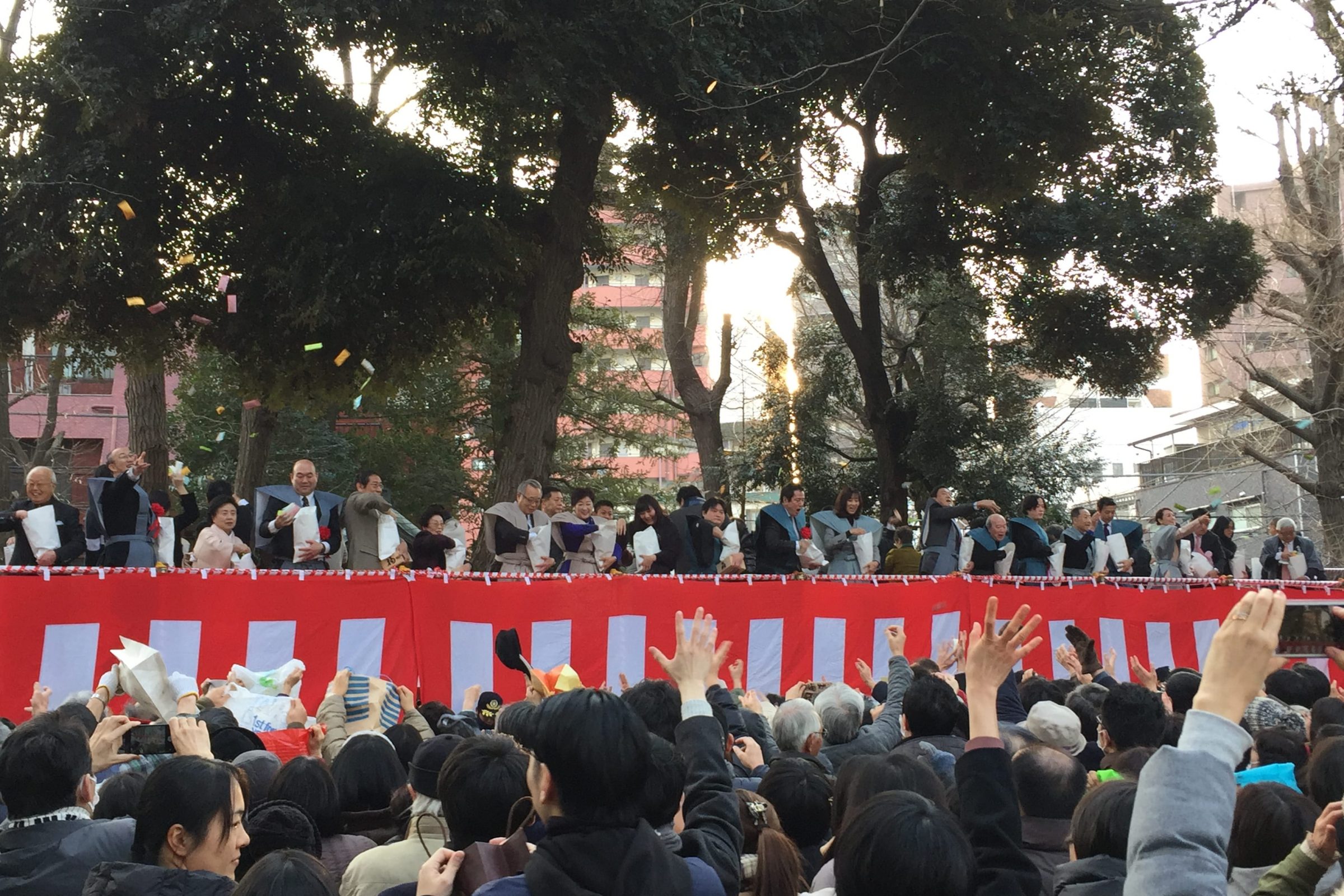 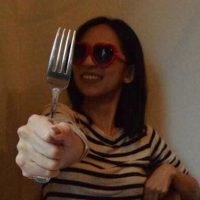 Have you ever heard of Mamemaki or Setsubun festival in Japan? Or the Oni? No? Well, I’d like to introduce you to the exciting world of Mamemaki (bean throwing), the Kishimojin Temple Setsubun Festival, Zoshigaya Tokyo. Setsubun is a traditional event and almost all shrines and temples in Japan celebrate it on February 3rd  annually. If you are in Tokyo around this time, don’t miss a chance to witness this authentic celebration! 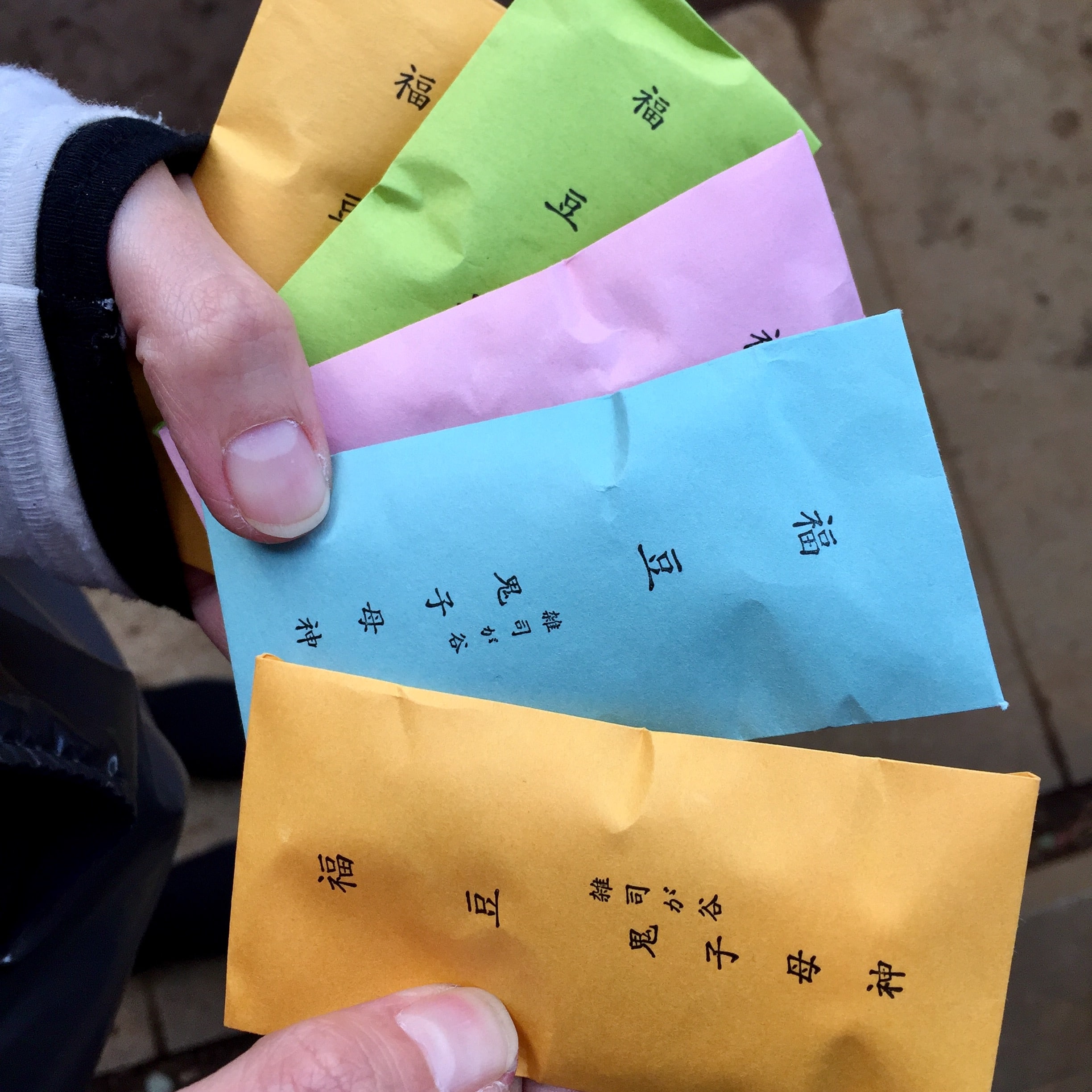 First, there is a couple of things you need to know about the Mamemaki. It’s part of the tradition in Japan, where people throw beans at the Oni* – or the person with the Oni mask on – yelling “Oni out, Luck in!”. And after throwing the beans, you have to eat the same number of beans as your age plus one more. This is done on the day before the beginning of spring (i.e. Feb. 3rd) according to Japanese lunar calendar, which is referred to as Setsubun (literal translation: seasonal division). The Mamemaki event or Setsubun festival is celebrated everywhere in Japan, from each household, kindergarten classrooms, to temples like Kishimojin.

(*Oni: The kind of yōkai, a supernatural ogre/trolls in Japanese folklore. Small kids are told that they’re gonna be eaten by them if they’re not being good kids).

The goddess of this temple used to be an Oni. Legend says that this is Oni who used to kidnap small children in the neighborhood and eat them. However, she was devastated when her own child was stolen from her. Thus, she reconsidered her mission and became a Buddhist goddess of easy delivery, giver of children, and guardian of children. Because of this history, people cannot yell “Oni out!” in this temple while the Setsubun Festival since they don’t want their goddess out of the temple.

(On a side note: look at the Chinese letter “鬼”. Notice the dot/point at the top? The Chinese letter that you can see in Kishimojin 鬼子母神 temple does not have that dot since it resembles the Oni’s horn on the head. And since the Oni in this temple has reformed herself, the horn that represents the Oni part is absent from the letter… or so the legend goes.)

Every year on February 3rd, Kishimojin holds a Mamemaki or Setsubun festival within the temple’s grounds. Some famous actors/actresses and politicians gather at the temple and volunteer to throw small bags with beans to the public. The festival usually starts at 3:30 pm and the atmosphere right before the bean throwing is like at an outdoor live concert. If you don’t mind bumping into other people (imagine Shinjuku station during rush hour), you will enjoy the festival fully by getting closer to the platform where you can catch the small bags with beans. Some veteran Mamemaki goers even have their own strategies to get more bags: raising a paper bag over their head.

*Please note: you’re not allowed to pick up the bags that has dropped on the floor. My guess is that once they allow you to pick them up, the place will be in utter chaos. 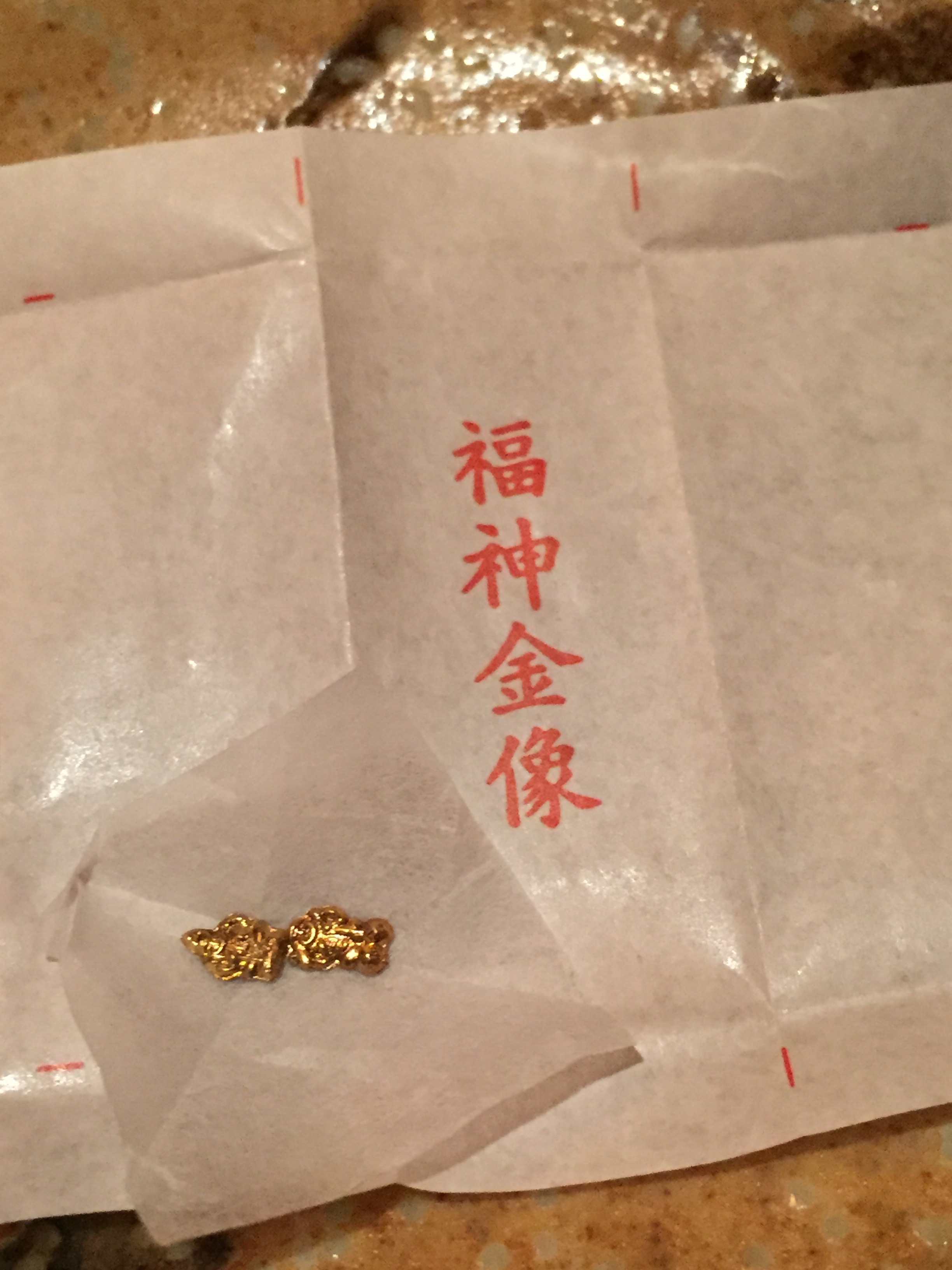 Some of the small bags contain a small golden statue that brings luck! They’re so small that you can carry them around in your coin purse. Some bags have caramels and candies in them, but most of the bags only contain roastesoybeansns. They’re delicious, by the way.

While you’re at the festival, try the Osen-dango in the nearest food stall. It’s a rice dumpling on a skewer, once a popular souvenir among the worshipers of Kishimojin Temple during the Edo period. It was revived a couple of years ago by a traditional Japanese sweet shop, and now you can eat it if they’re not sold out. (Be sure to visit the temple earlier than the Setsubun festival starts if you really want to try it.) 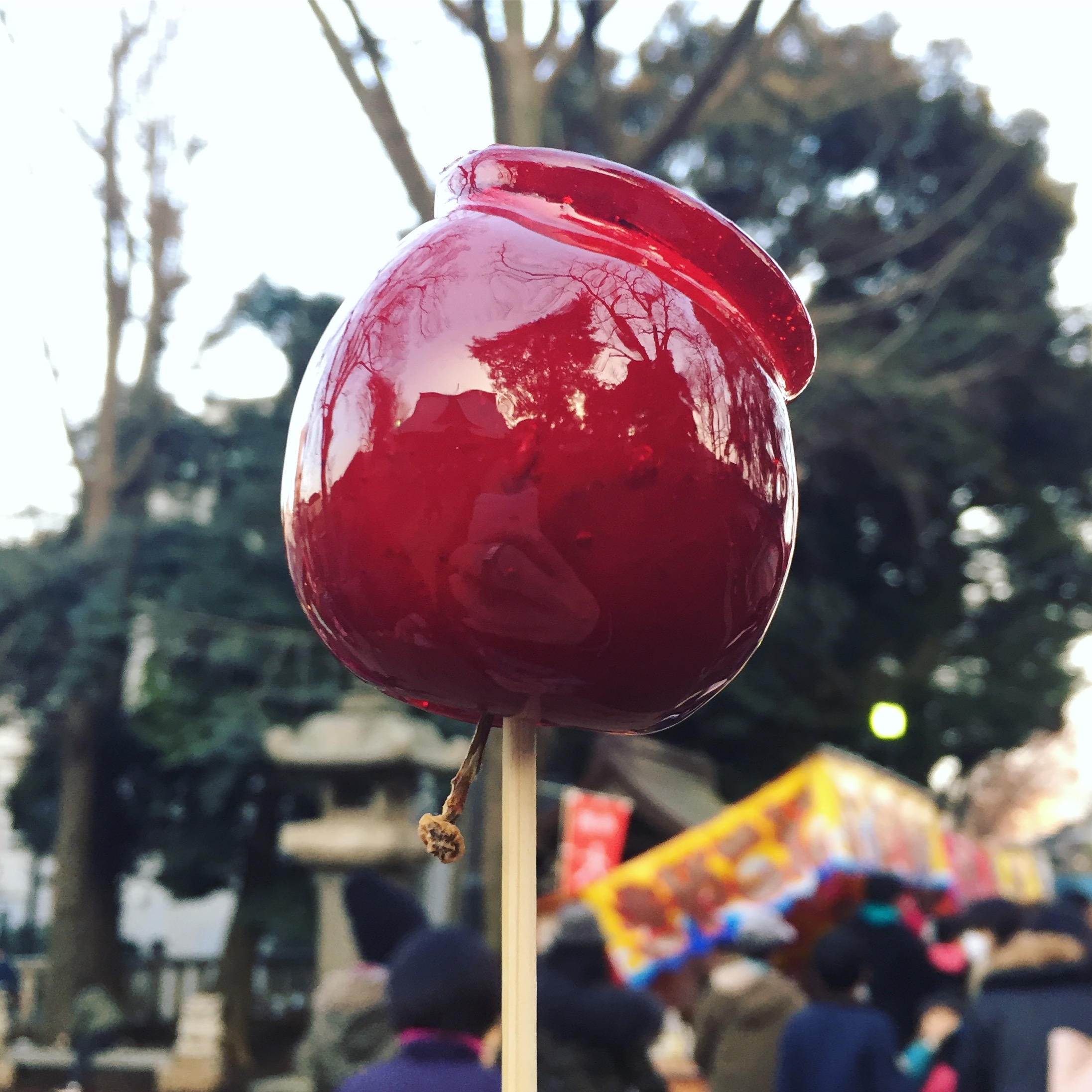 Or you can get the apple candy and pretend that you’re the evil stepmother of snow-white.

To get to the station, take the Fukutoshin Line bound for Wakoshi from Shibuya, or bound for  Shibuya from Ikebukuro. 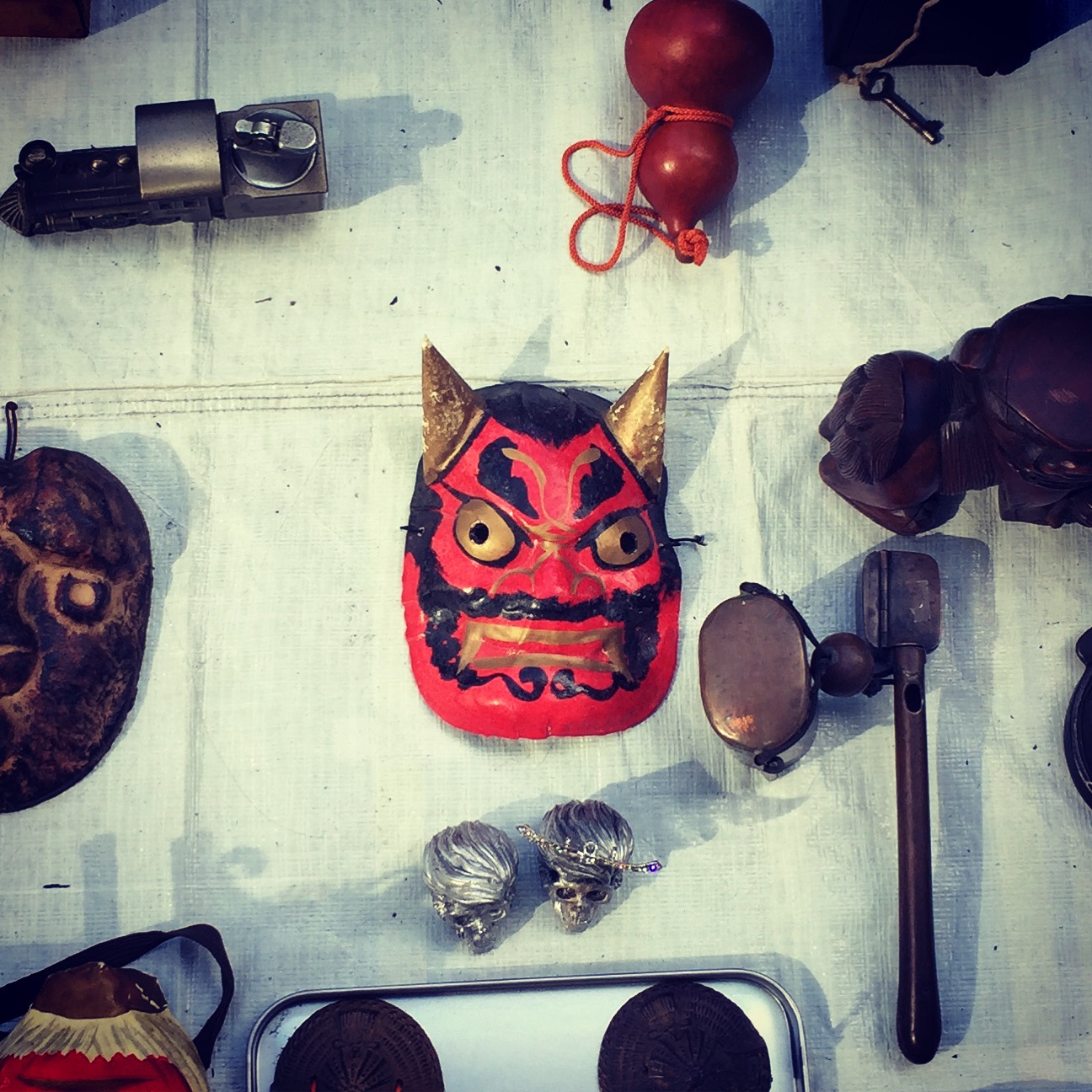 The Setsubun Festival in Kishimojin is not a usual Setsubun festival. Try going to the local (and less famous) temple to see what kind of Mamemaki they’ve got. Or, you can simply buy the “Setsubun-set” (usually comes with paper Oni masks and beans) in supermarkets and have your own version of Mamemaki experience!

Fear not, you don’t really have to eat all those beans you’ve accumulated during the festival! (pssst! Some people hate eating those beans that they eat peanuts instead, or just simply ignore the tradition completely!)

If this article intrigued you, I recommend you to google some of the legends regarding the Oni. The more you know about the Oni, the more you can catch a glimpse of the Japanese minds!

If you would like to experience this outstanding festival and explore Tokyo together with a friendly local guide, plase click on the banner below! 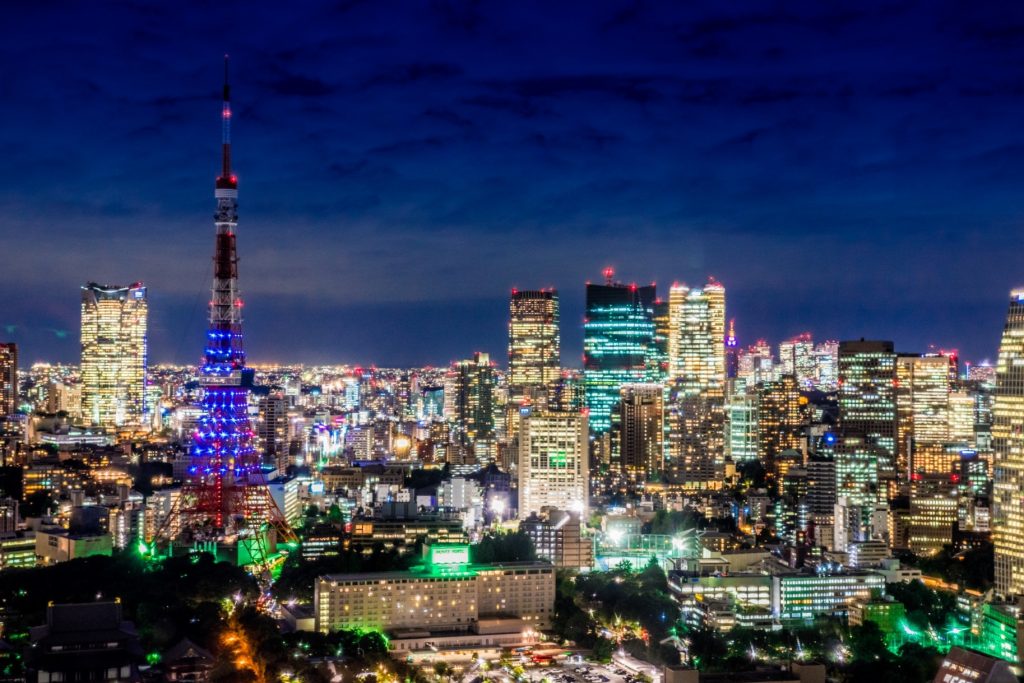 Most of the travelers who come to Japan enter the country through Tokyo. Even if it is not the main place of your destination, it would be a great idea to stay in the capital city for a few days. The biggest conglomerate in the world has much to offer to any kind of traveler. Whether you want to go sightseeing, shopping, eating out, or trying something special that you can experience only in Japan, Tokyo has it all. In the following article, you will find 100 things and many ideas on how to spend your time in Tokyo! Please, have a look!