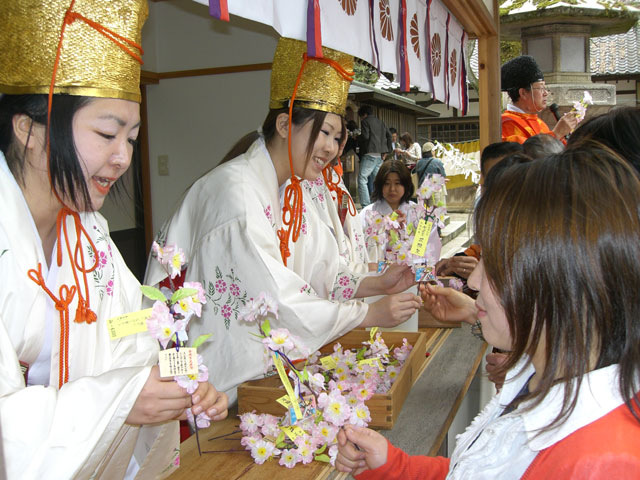 Share the Love at the Flower Exchange Festival in Fukui Prefecture!

In Japan, there is more to enjoy than just Hanami in spring. Actually, there is a really romantic festival for exchanging flowers in Fukui prefecture. If you want to share your feelings with your lover or friends, read on to learn more! 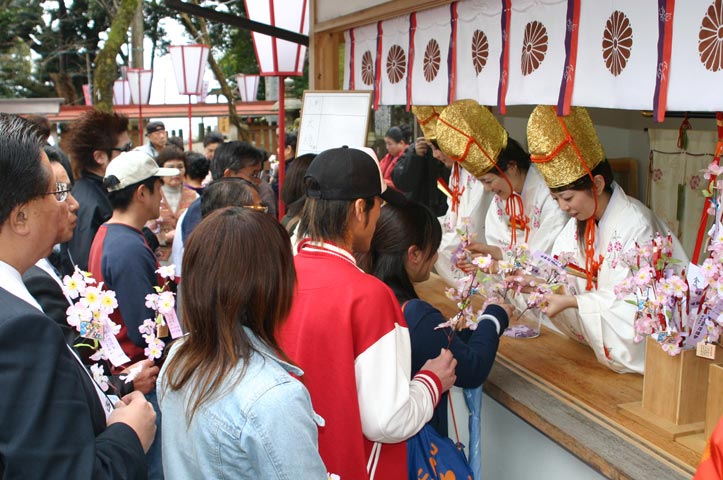 Have you ever experienced the art of “origami” paper folding? Seeing the process of a sheet of paper being folded up into many different kinds of shapes, an animal, a bird or even a human figure, I can’t help saying, “It’s magic!”. I love to fold origami paper cranes. What is your favorite shape to fold?

By the way, I have made a new discovery recently. Before starting to write an article about any festival, I make it a rule to open an atlas of the Japanese archipelago. I do this not only to see what prefecture and city the festival takes place but to check the “shape” of the area on the map. I was very surprised to find the shape of Tsuruga, Fukui Prefecture, formed by its demarcation lines, resembles that of a paper crane. The name of the city also sounds like the bird species because a Japanese word “tsuru” means “crane” in English. Talk about a coincidence!

Kanegasaki Shrine is now a famous power spot for succeeding in romance, but it has a tragic history that gives you the different impression from the current one. Let me introduce a little about it first. 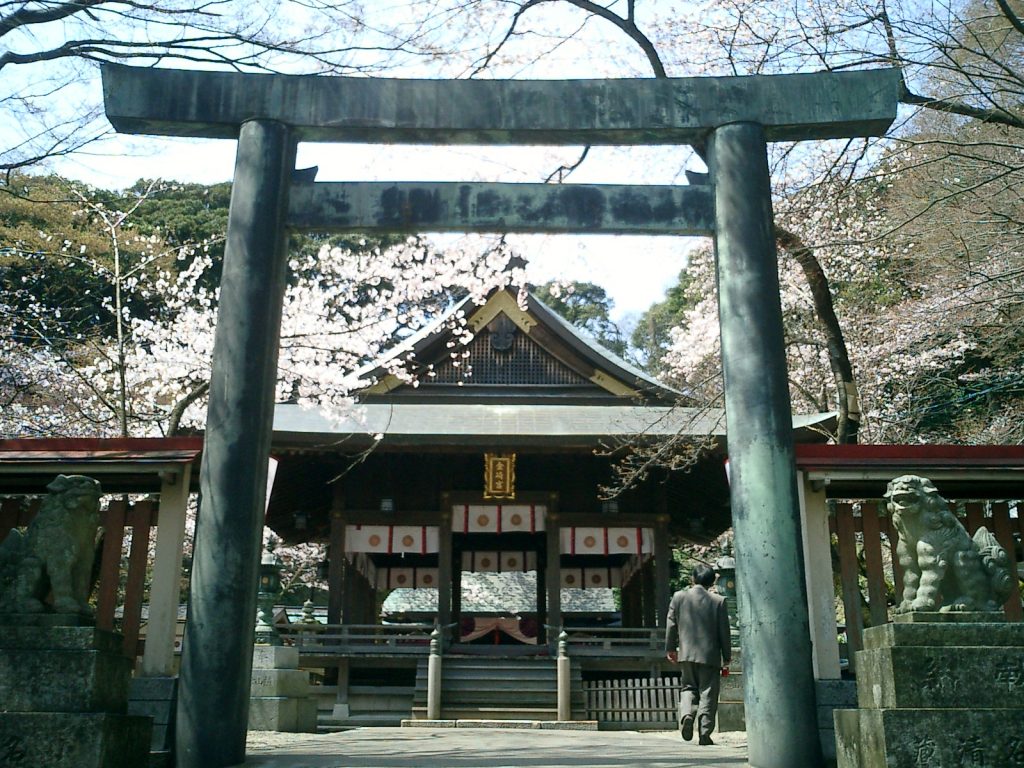 Kanegasaki Shrine was built in 1890 to enshrine Prince Takanaga and Prince Tsunenaga at the foot of Kanegasaki Castle ruins. They were Emperor Go-daigo’s (1288-1339) two sons. At Kanegasaki Castle, there was a fierce battle in 1336 between the Northern Imperial Court and the Southern Imperial Court. Around this period, the powerless Kamakura Shogunate (1185-1333) ruled Japan under the support of the Imperial Court. After the collapse of the Shogunate in 1333, the Imperial Court broke into the Northern Court supported by Ashikaga Takauji, a prominent samurai warrior and the founder of the subsequent Muromachi Shogunate (1336-1573), and Southern Court started by Emperor Go-daigo.

At first, Takauji had supported Emperor Go-daigo. But, he started to have doubts about the emperor’s policies that gave aristocrats power over samurai’s lives, and eventually rebelled against the emperor. Nitta Yoshisada, another brave and experienced samurai and Takauji’s comrade-in-arms, decided to stay loyal to Emperor Go-daigo and his Northern Court, which finally led to a direct showdown between Takauji and Yoshisada near Minato River in present-day Kobe, Hyogo. Yoshisada lost the battle and then escaped along with Emperor Go-daigo’s two princes and others to Mt. Hiei, Kyoto, to hide out. 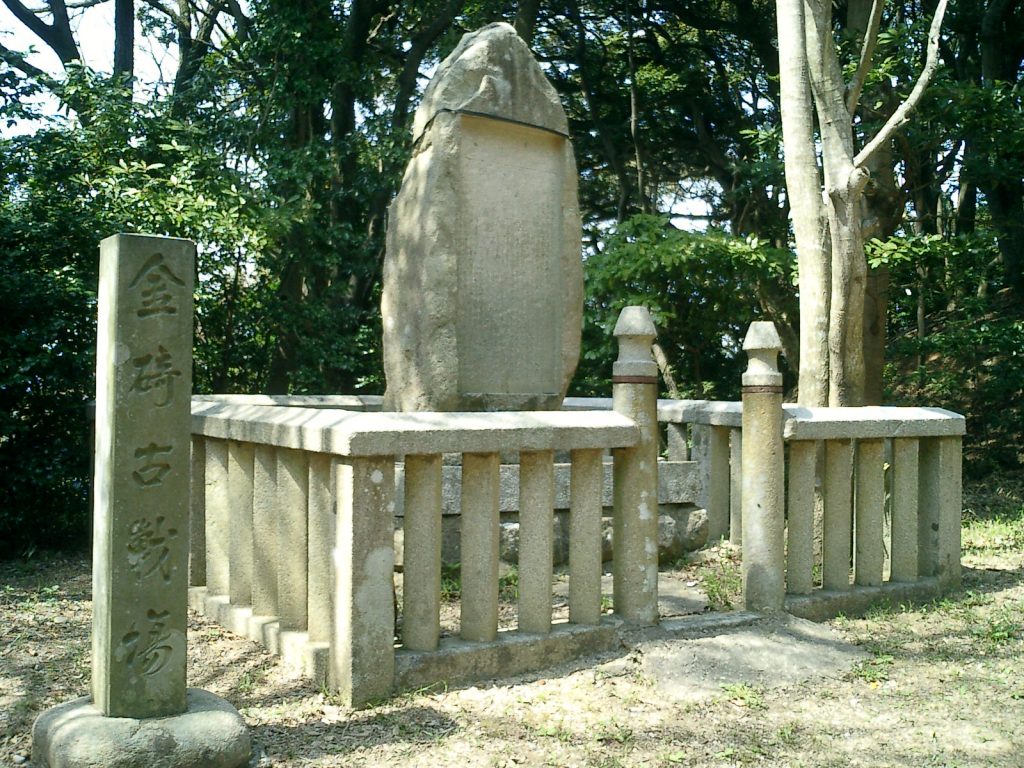 In 1337, Yoshisada and his party again escaped from Takauji’s army to Kanegasaki Castle, but the enemies besieged them with no food and water. Yoshisada’ son and Prince Takanaga set fire to the castle and killed themselves. Prince Tsunenaga barely escaped from the siege, but enemies captured him soon later, and killed him as well.

About Flower Exchange Festival in the Old Days

Probably in the hope of comforting those who were killed or forced to take their own lives in the Siege of Kanegasaki, especially Prince Takanaga and Prince Tsunenaga, local people requested the building of Kanegasaki Shrine near the ruins of Kanegasaki Castle and the planting of cherry trees in the premises.  Over time, the graceful color of cherry blossoms might have encouraged a romantic mood. It made the shrine such a good rendezvous spot for young couples.

Flower Exchange Festival apparently started in 1907. It was still in the Meiji Period (1868-1912) when romantically dating someone was very conservative. So, people didn’t have a chance to express how they felt to their partners in public. This festival became very popular as it gave people chances to confess each other’ love. People in those days told someone they wanted to date, “Let’s exchange flowers for yours,” handing cherry twigs to their beloved ones. If they received the twigs, their romances were believed to bear fruit and last for good. 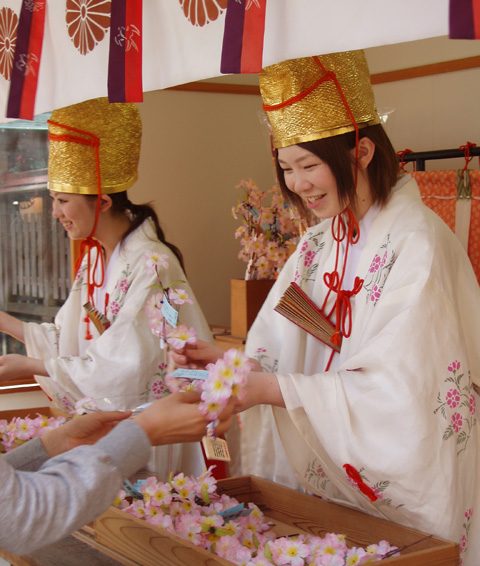 Now, Flower Exchange Festival takes place between April 1st and 15th. It coincides with the period of cherry blossom viewing in spring. In Kanegasaki Shrine, there are about 1,000 cherry trees for flower viewing. You can walk through the arches of the cherry branches with clusters of flowers on them and feast your eyes on the beautiful colors.

You can buy a fake twig with some cherry blossoms for ¥500 from young “luck bringing” girls called “福娘(fuku-musume)” at the shrine or on the nearby streets. First, go exchange the twig you bought with another “fuku-musume” after saying, “Let’s exchange flowers”. Then exchange yours for your significant other’s. After that, the twig you exchanged can be exchanged with your friends or others at the shrine. According to local folklore, the more you exchange, the more likely your prayer will be answered.

How to Get to Flower Exchange Festival 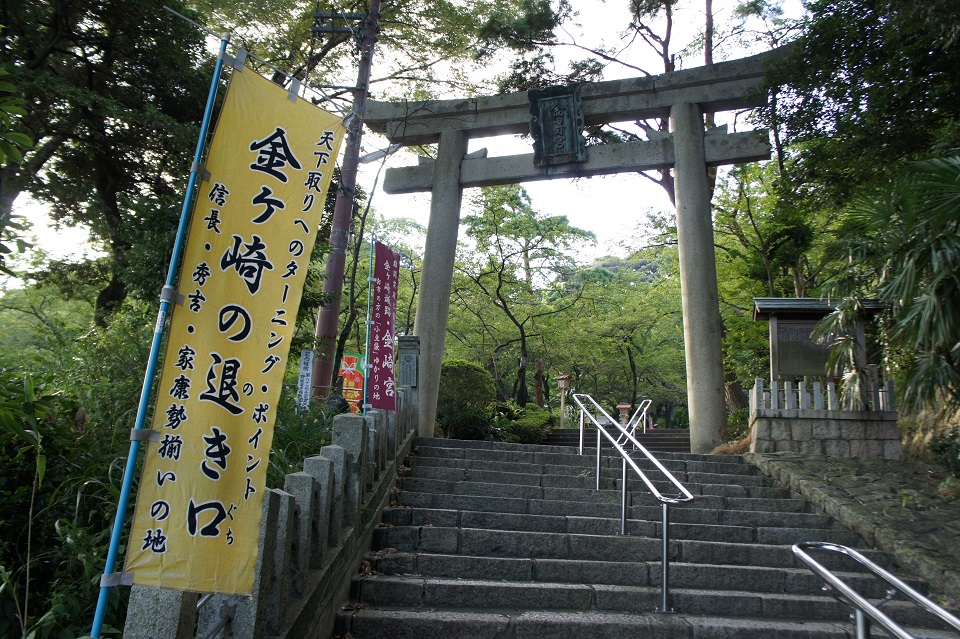 Other Sights in Tsuruga

Come to think of Tsuruga, several bronze statues of characters and scenes from the popular anime series “Space Battleship Yamato” and “Galaxy Express 999” can be seen in the city’s downtown area in commemoration of a special exhibit in 1999 of artworks by Reiji Matusmoto, a prominent Japanese cartoonist and the creator of the two manga mentioned above. Strangely enough, Tsuruga is not where Matsumoto was born, but the statues have become part of the city’s attraction.

Explore Fukui Prefecture With its Rich History and Exciting Festivals! 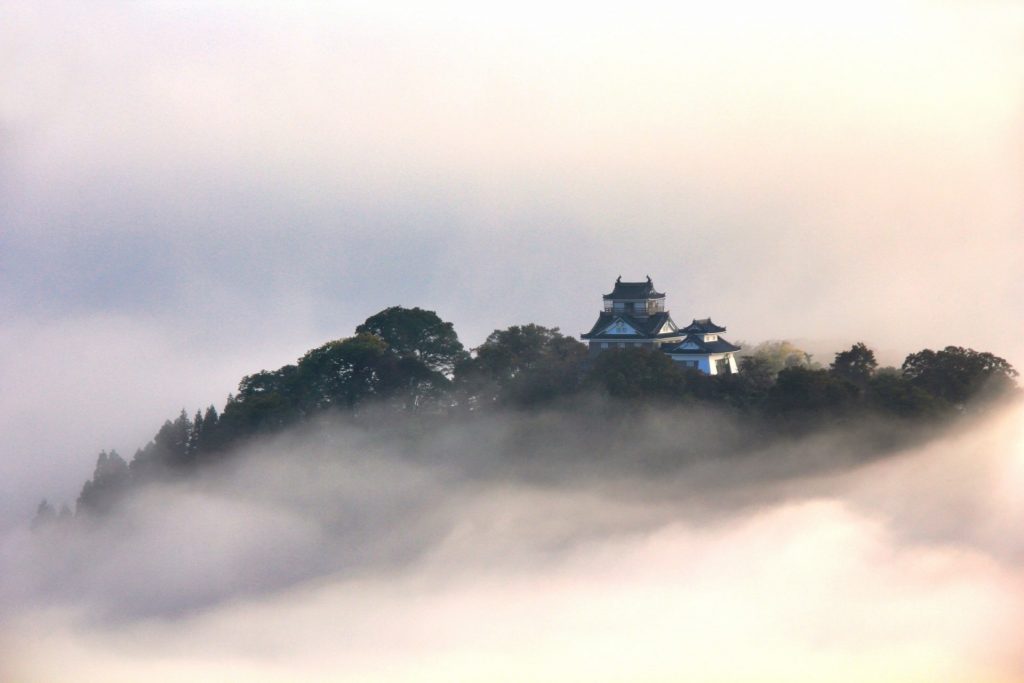 Fukui is not the major prefecture to visit in Japan. Yet you will be surprised in a good way with its nature, history, and food once you get there. If you are tired of spending time in the hustle and bustle atmosphere of the big cities like Tokyo or Osaka, Fukui prefecture is the place to go. This territory features exciting local festivals and unforgettable scenes of provincial Japan. The following article assembled the best festivals and activities to enjoy in Fukui Prefecture, which will make your trip to Japan even more rewarding! 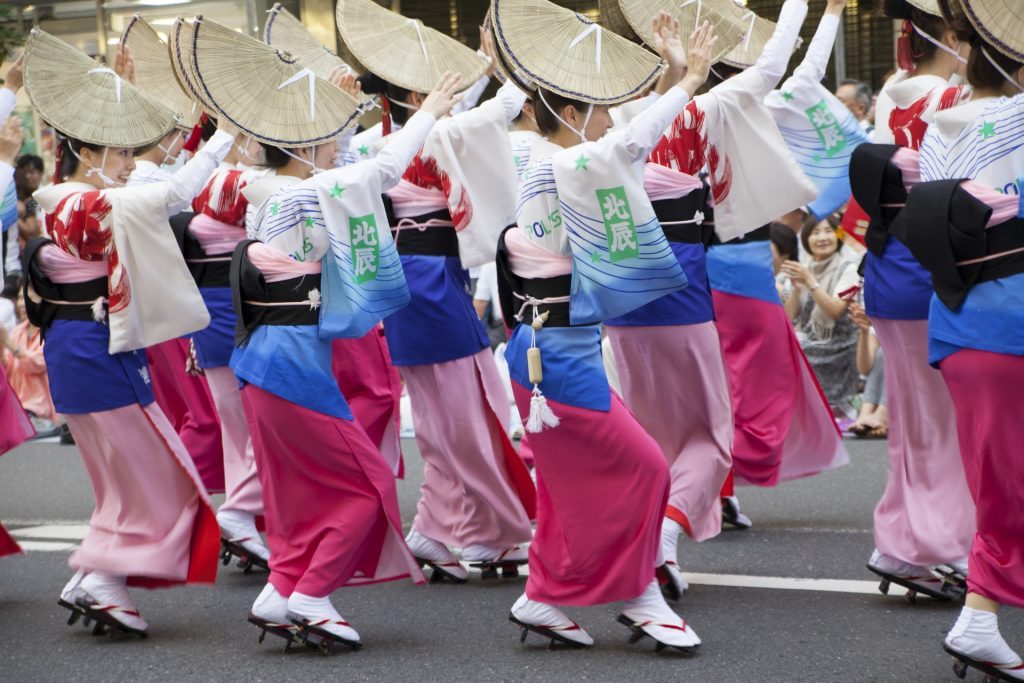 How about watching or even taking part in Japanese dance festivals. The festivals are very different, and you can see either traditional dances and hear the music that had not changed with time, or visit more contemporary dance events. Anyway, what`s a festival without dancing? There are so many dance festivals in Japan that sometimes it is hard to choose one. Following article collected Best Dancing Festivals in Japan. Please have a look and pick your favorite!
URL: https://festivalgo.huber-japan.com/events/5246/

A lot of people when they get to a Matsuri for the first time feel themselves a bit lost, they confuse about what is happening around. If you are new to Japanese Festivals or want to know an alternative way of how you can enjoy these events, the following article will provide you with a set of helpful tips on how to choose a proper festival and activities you should try there. Please don`t hesitate to take a look at it!