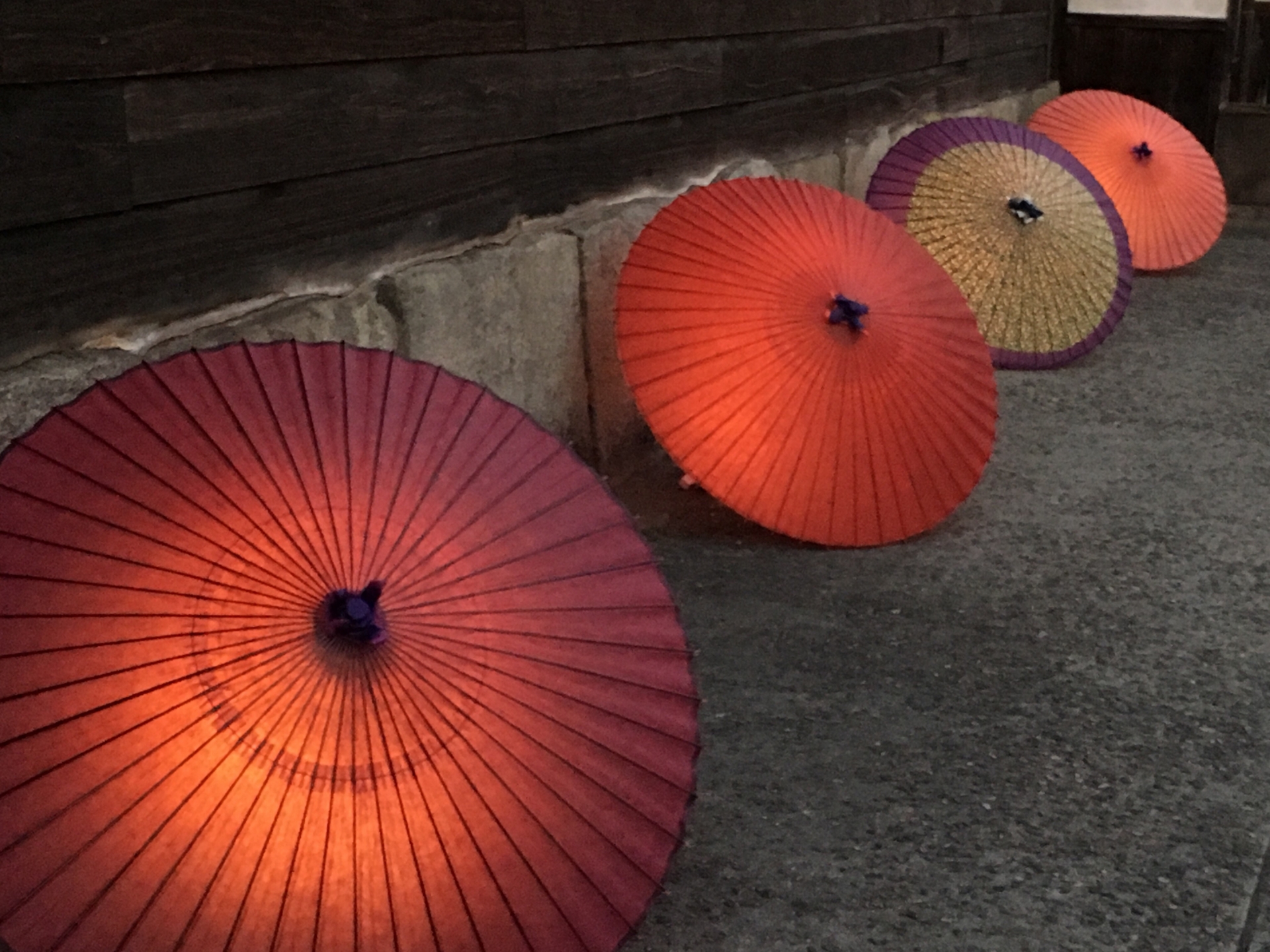 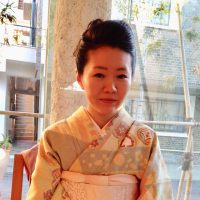 One of the most unusual events in Kagoshima is Soga Don no Kasayaki. The tower of 200 colorful umbrellas is set alight on the bank of Kotsuki River in honor of two brothers. Those brothers used umbrellas as torches according to an old Japanese story. The fire is powerful that you will feel the heat of fire even from a long distance. This article is going to introduce you to the unique umbrella burning festival in Kagoshima and suggest you how to enjoy this event as a local! 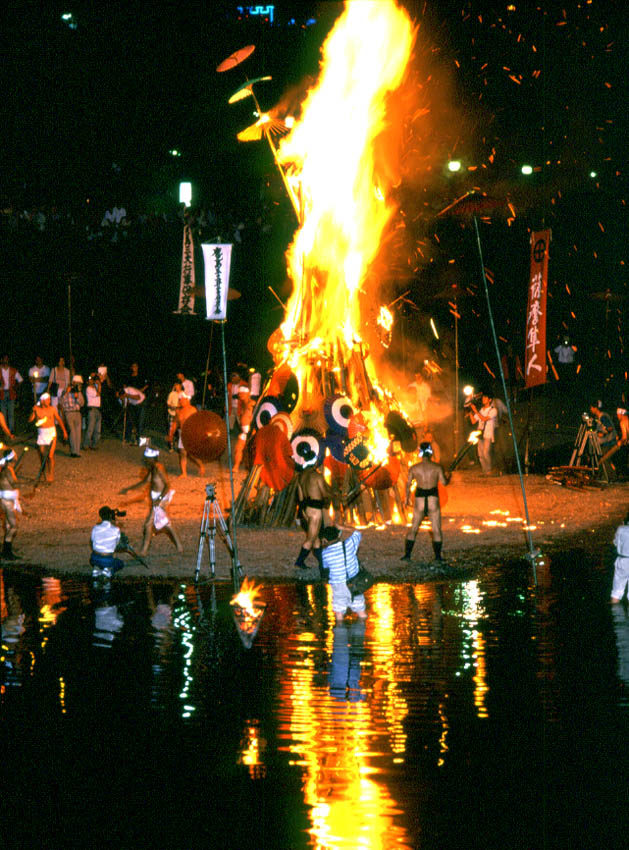 During the Meiji Restoration, the Satsuma domain (present-day Kagoshima) played a vital role in the movement and produced many influential historical figures including Saigo Takamori and Okubo Toshimichi. The reason for this is that Satsuma had its unique education system “Goju education,” regional governance system and networks.

The umbrella burning ritual is based on the event that happened about 800 years ago in Shizuoka (more than 1,000km away from Kagoshima). The Soga brothers burned their umbrellas as torches when they avenged their father after 17 years from his death. They succeeded in killing their enemy, but older brother lost his life during the attack, and the younger brother was captured and sent to a death sentence.

This story of their filial piety has been handed down from generation to generation, because “Goju education” attached weight to honesty, loyalty, and bravery. To pay respects to Soga brothers, Satsuma people have been burning umbrellas every year for centuries. 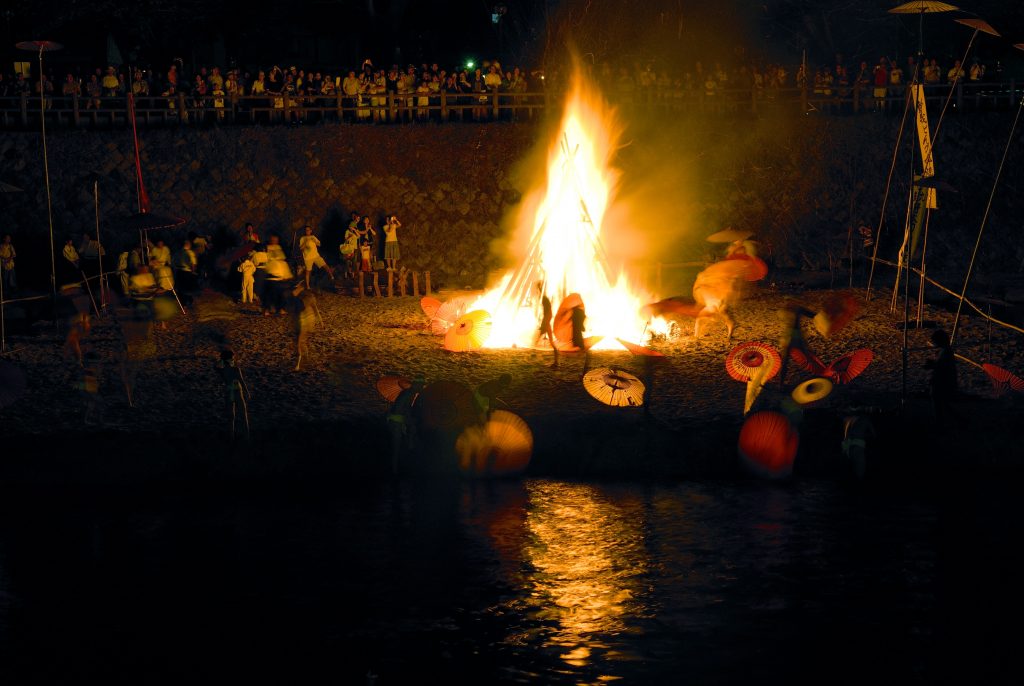 You can watch the demonstration of the sword skills of Jigen school where young and adults show their swordsmanship. Jigen school is known for its emphasis on the first strike, and their teachings state that a second strike is not even to be considered. Besides, their shouts are very impressive.

The most exciting part of the festival is to see the huge tower of “Wagasa” (umbrella) Burning. “Wagasa” is a traditional Japanese umbrella. In contrast with typical Western umbrellas which are mostly made of either cloth or plastic, “Wagasa” are typically made of paper and bamboo.

The tower consists of 200 colorful “wagasa” collected across the country, and the tower`s height is about 8m. Fires are lit on torches of young people who are singing the traditional song of Soga brothers’ loudly. You can see the massive tower of “wagasa” lighted in the darkness, and it is wonderfully beautiful. Also, you feel the heat of the big ﬁre. After the tower gradually collapses, young people keep throwing additional 300 “wagasa” into the ﬁre bravely while being covered with sparks. After all, about 500 “wagasa” are burnt down in this ritual. 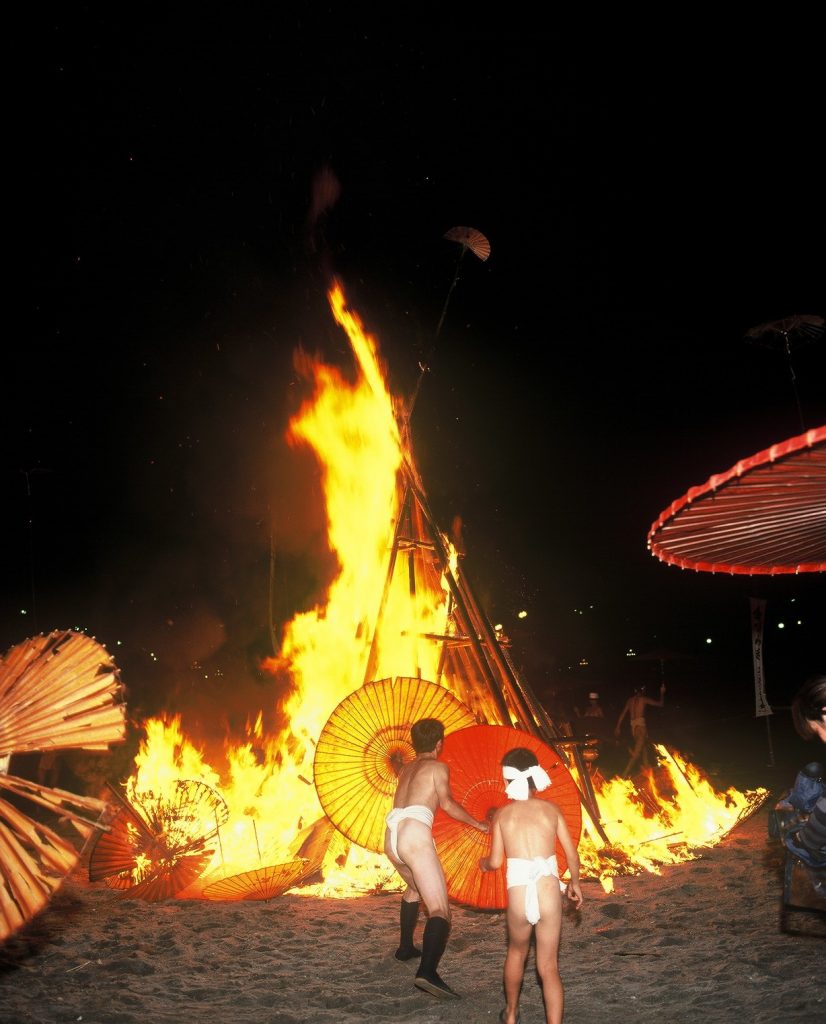 Place: Bank of Kotsuki River near the Minaminihon Broadcasting Co., Ltd., 15 minutes walk from Kagoshima Chuo Station. Held at nightfall in front of the Museum of the Meiji Restoration.

Kagoshima Chuo Station is a major railway station located in Kagoshima City and operated by JR Kyushu. It is the last stop on the Kyushu Shinkansen Line from beginning in Hakata (Fukuoka) taking only one hour and 30 minutes.

What Other Things You Can Do in Kagoshima? 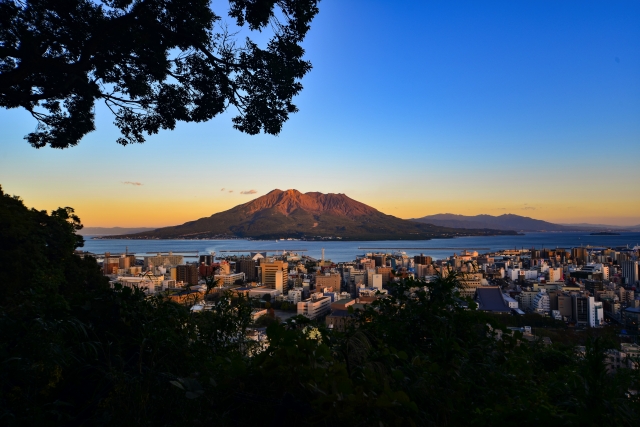 Sakurajima erupts a little almost every day. But don’t worry! Local people continue to coexist with Sakurajima, and there are a lot of attractions you can enjoy! There are some pleasant foot baths (free of charge) and Magma Onsen (hot spring bath). Also, you can visit Yunohira and Kurokami Observation Point to get excellent views to take breathtaking photos. It is located about 4 km from Kagoshima City and a 15-minute ferry ride from the downtown area.

Yakushima Island– hike through the forests and see the ancient cedar trees.

Yakushima Island was recognized as a UNESCO World Natural Heritage Site in 1993. It is also called “the island of ancient forest and water” because of the huge Yaku cedars, which are over 1,000 years old, moss and abundant water system.

Besides, there are many fantastic hiking trails, must-see points, snorkeling, kayaking, etc.

I recommend you to go there because I believe when you feel the nature you will understand Yakushima is one of the most beautiful places you could imagine. 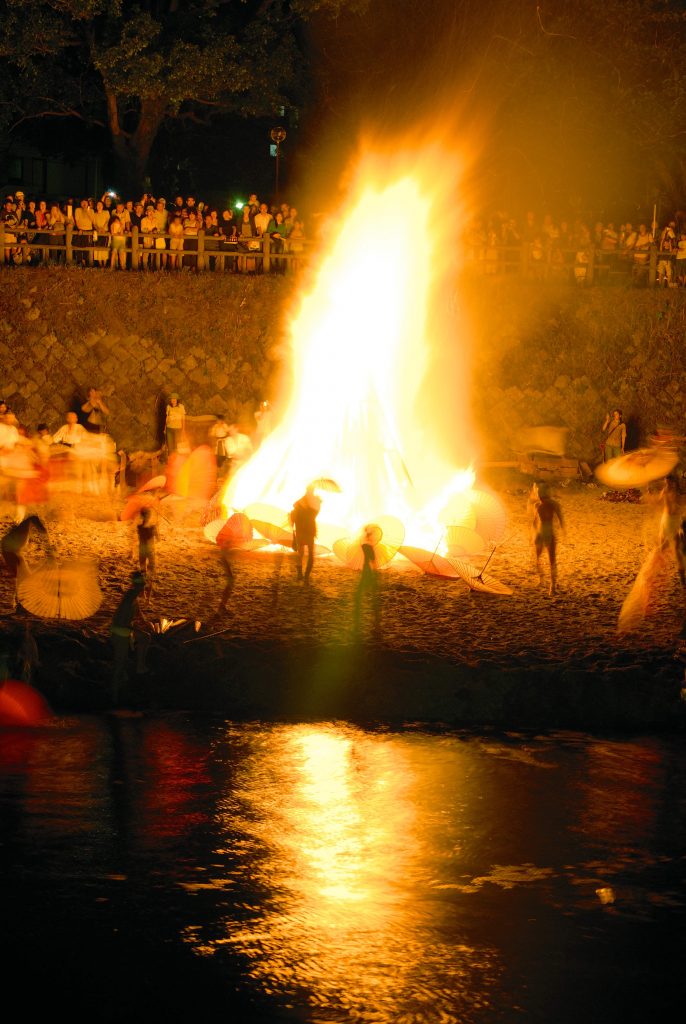 Soga Don no Kasayaki is a unique traditional festival. If you are in Kagoshima in summer, don’t miss an opportunity to see this breathtaking blazing festivity. It might be painful to watch how these beautiful umbrellas burn so quickly. However, this is something you will never see anywhere else.

If you would like local guides to take you to this festival and help you to discover Kagoshima even more, please check the banner below! 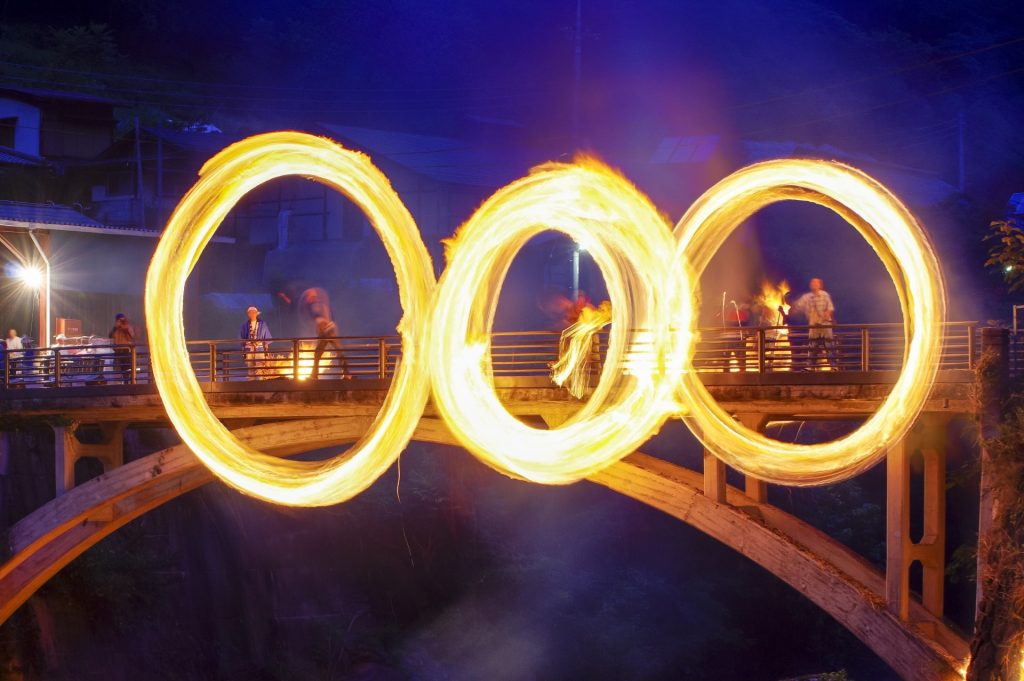 Do you like that mystical scenes and atmosphere that fire creates in the darkness? I always loved watching the fire as it has a hypnotic effect on me. Even though there are not so many fire festivals in Japan, some of them are still taking place serving many religious purposes or victory celebrations. If you are looking forward to having some cultural experience in the dark with fire in Japan, the following article will introduce you 10 Best Fire Festivals in Japan. Please click on the link below!

Hi, I like spending time outdoors and I learned about tea ceremony. There are many beautiful places in Japan. I hope you will find this information useful.