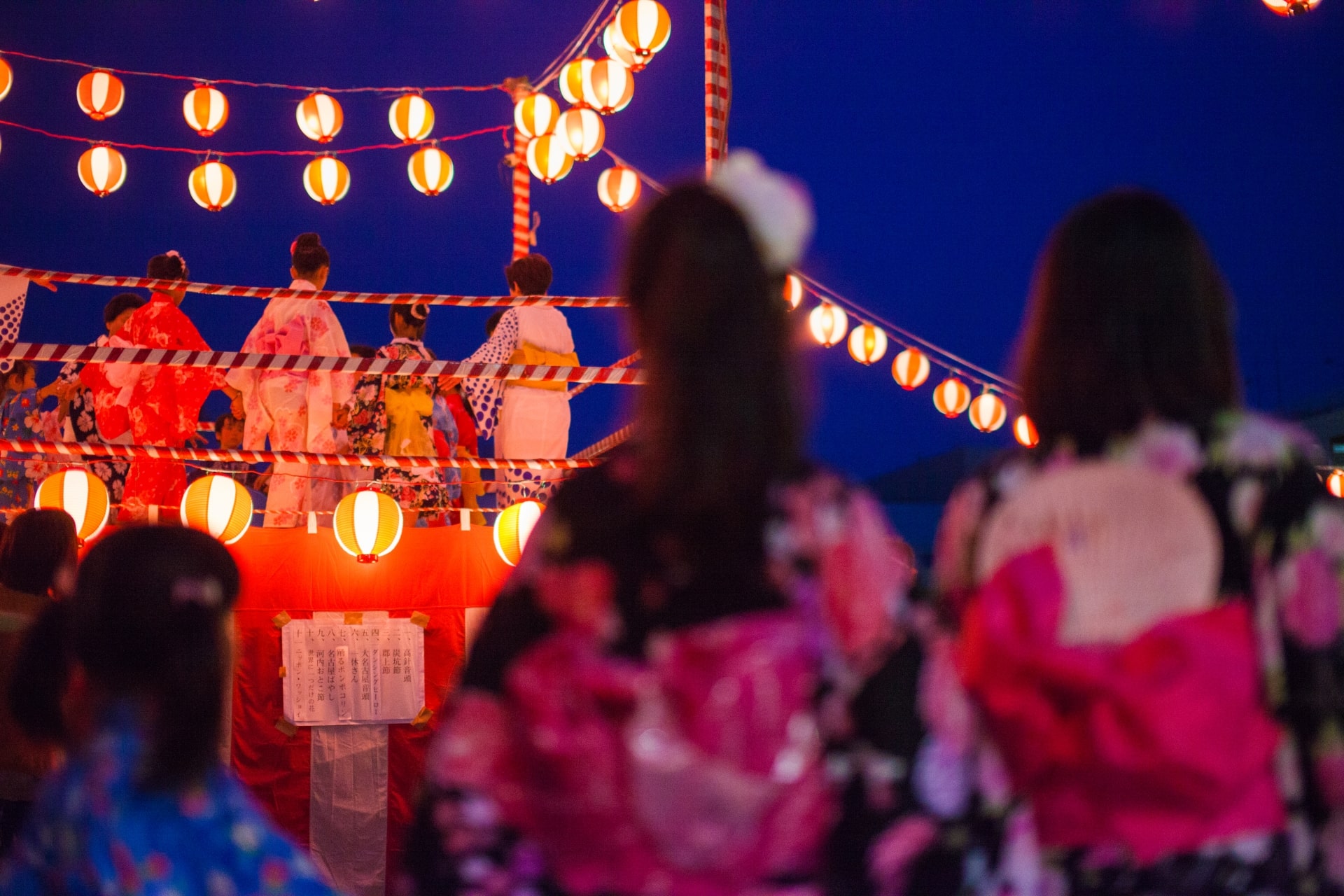 Yukata is now famous for a casual kimono mainly on festive occasions in summer. The origin of this Japanese traditional garment dates to the Heian Period (794-1185). Yukata was originally worn as a bathrobe. At that time, only people of the noble class were wearing yukata to prevent their skin from getting burned when they took steam baths. Nothing was put on other than the yukata while bathing, so wearing it was equivalent to putting on underwear. Of course, they never wore them outdoors, let alone visit someone in yukata. Correctly speaking, yukata is a little different from kimono, which is a formal garment for ceremonial events. 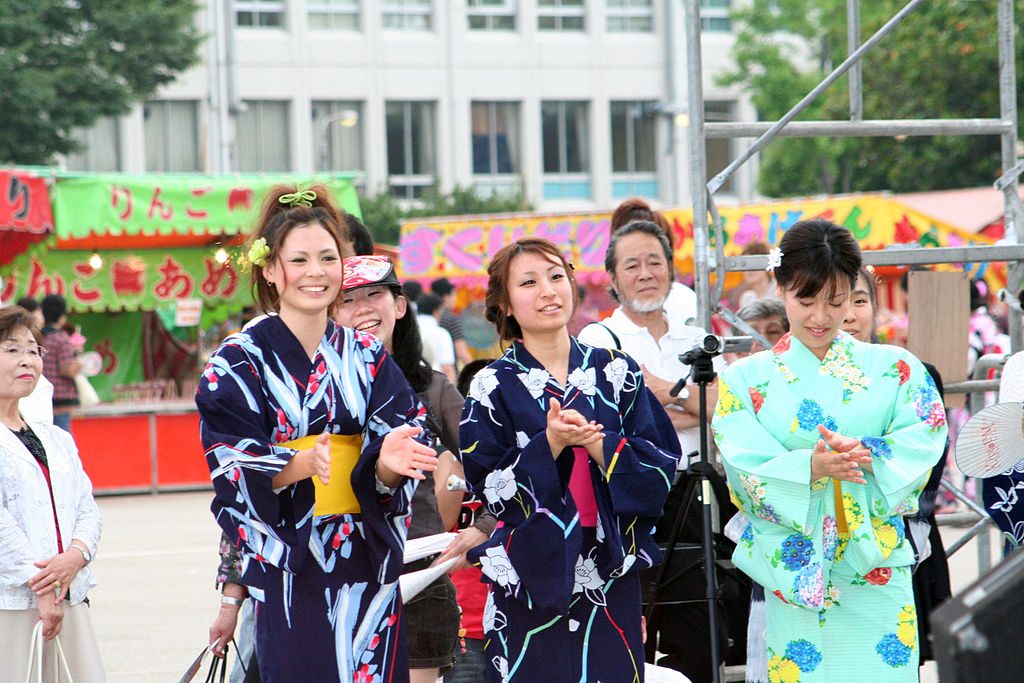 The Origin of Yukata Matsuri in Himeji

The festival has been annually held for about 260 years to worship the “Himeyama (姫山)” deity enshrined in Osakabe (長壁) Shrine. Before this traditional event began, Osakabe Shrine was in the territory of the Himeji Castle, which is currently one of the first UNESCO World Heritage sites in Japan. So, no one could visit the shrine but samurai.

In the middle of 1700s, Sakakibara Masamine (榊原政岑), the third lord of Harima-Himeji Domain (current Hyogo Prefecture), transferred the shrine from its original location to the grounds of a local temple that common people casually visited. To celebrate the relocation of the shrine to a new place, Masamine planned to hold a special festival on June 22nd, 1742, which fell on the June solstice. He soon found that people had a lot of trouble of getting formal kimono ready because they didn’t have much time and money to spend on it to prepare for the festival at a short notice. So, Masamine allowed common people to wear yukata at the festival. This is said to be the origin of the Yukata Matsuri and the custom of wearing yukata outdoors.

A lot of young kids and women in colorful yukata parade through the shopping area of Himeji town. Seeing the small girls holding their revolving lanterns called “somato (走馬灯)” makes the whole procession look much lovelier. Other than the parade, there are some events on the stage in Jonan Park at Osakabe Shrine such as a fashion show of yukatas, various music concerts, traditional or pop dance performances, and much more. 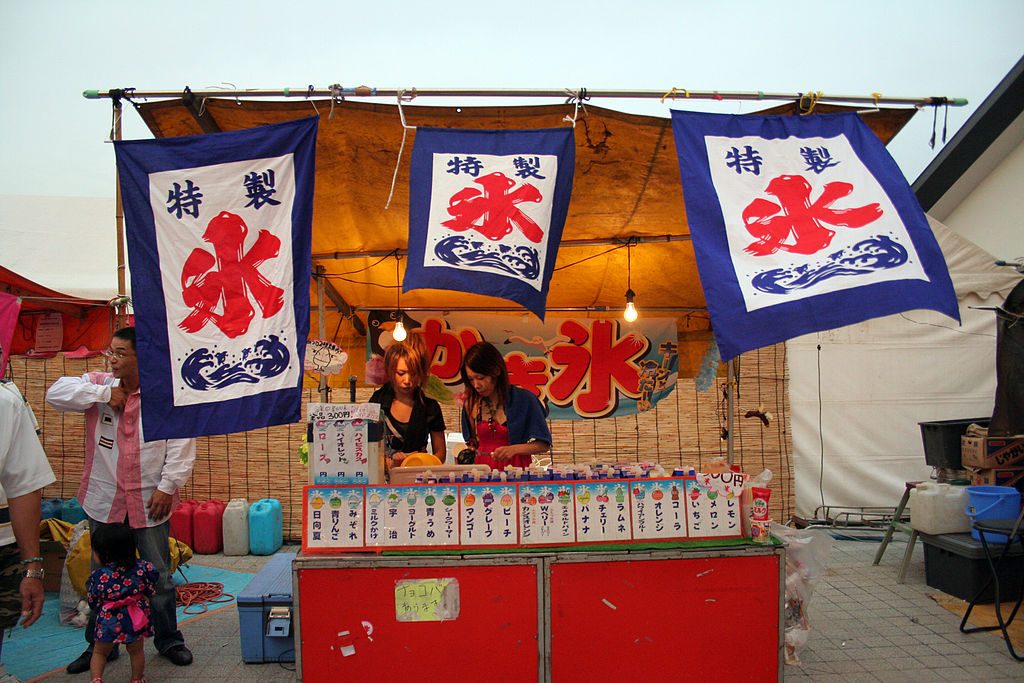 Nothing says Japanese matsuri like carnival booths. There are a lot of food, drink, and other merchandise booths available at the festival. This festival boasts the largest number of carnival booths among other summer festivals in Western Japan. (There used to be over 800 stalls at one time.) How about looking for a booth of “Akashi-yaki”, which is a small round dumpling made of egg-rich batter and a small chunk of octopus? This is a local specialty from neighboring Akashi City and a “prototype” of Osaka’s takoyaki. I love it! 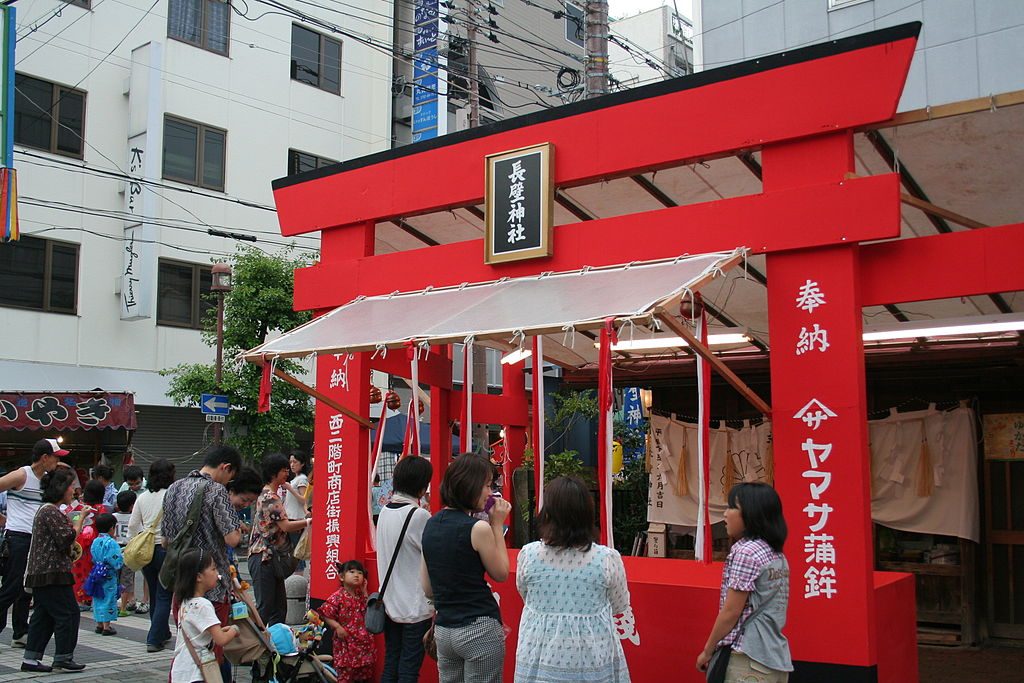 Join the festival in yukata, and several services offered by some commercial facilities will be free of charge during the festival. Here is the list of such facilities:

Himeji City Bus services will charge you only half of the regular fare. The shops in the shopping arcade from Himeji Station to Himeji Castle will offer various discounts for their goods and services. Maybe it will give you a great chance to buy another cute yukata at a reasonable price.

How to Wear a Yukata 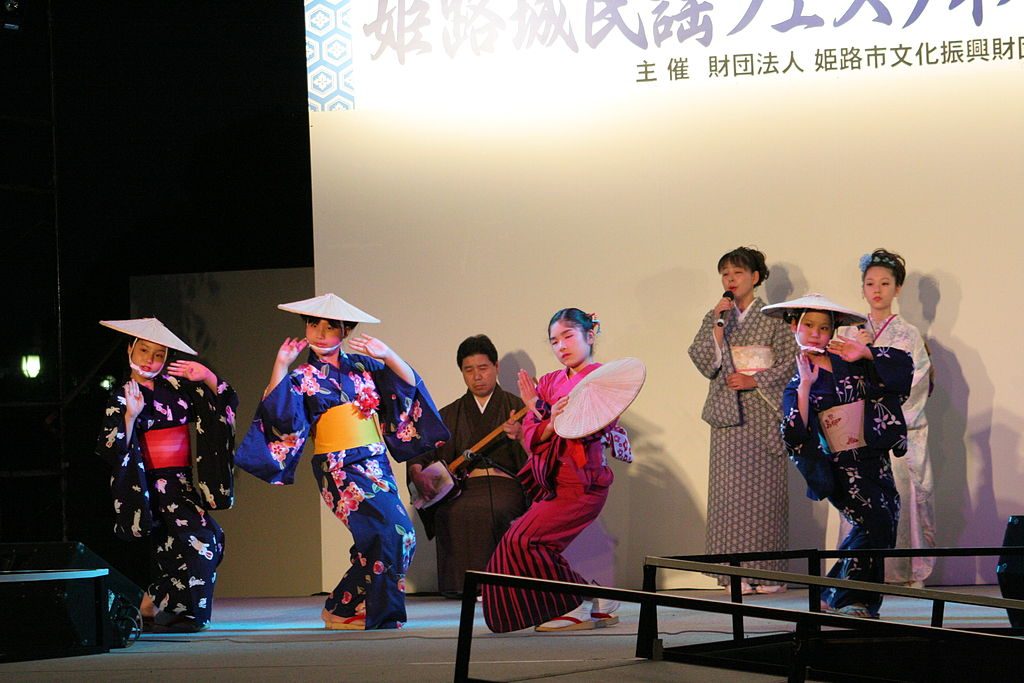 Other Items to Wear

A standard yukata ensemble consists of a cotton undergarment called juban, an “obi” sash, “geta” – a kind of clogs with an elevated wooden base, “sensu” – a foldable paper fan, small “kinchaku” cotton bag along with yukata. You don’t have to wear socks, of course.

The left side of yukata usually goes over the right side. If wrapped reversely with right over left, it’s considered to be a style for participation in the funeral. After you properly wrap each side of the yukata, use an “obi” sash to secure the style in a bow with the excess of the sash. Traditionally, we place the bow in the back because, historically, bows in the front meant that a person who wears it like this is a prostitute. Actually, Sakakibara Masamine is said to have been having a passionate affair with a high-ranking courtesan from Yoshiwara, the biggest red-light district in Edo (Tokyo), and eventually paid a huge amount of money to redeem her. However, most of the money was from the public financing fund.

Other Things to Do in Himeji 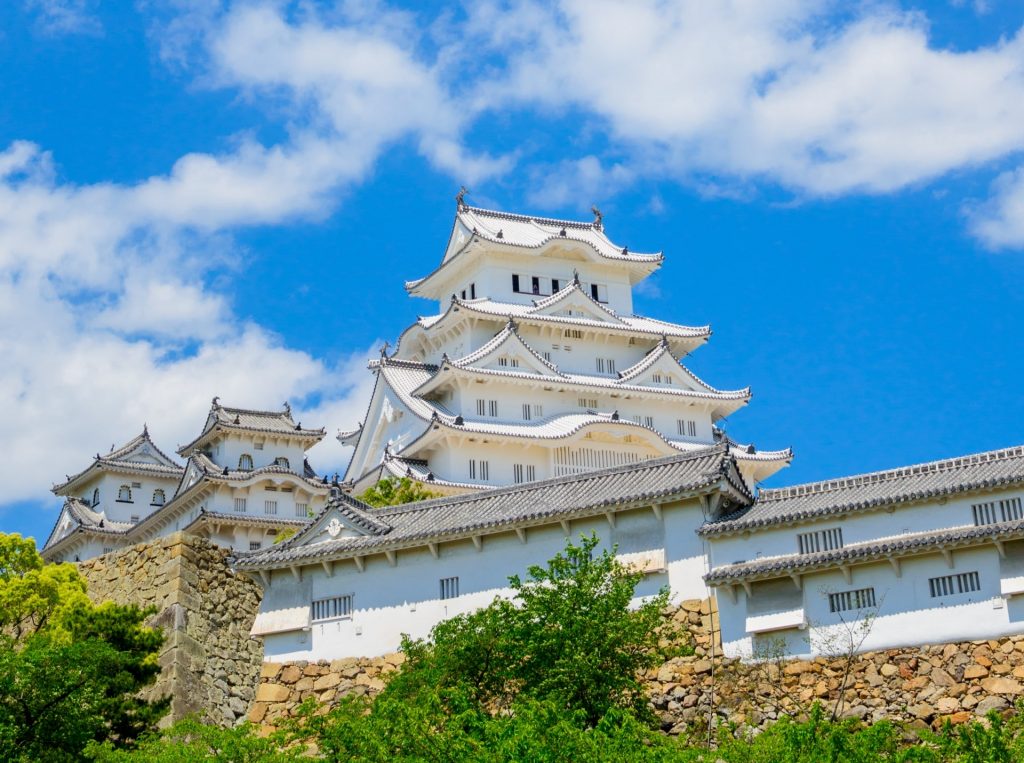 Himeji Castle, also known as “Shirasagi-jo” or White Heron Castle, is arguably Japan’s most spectacular traditional building famous for its stately and beautiful design and appearance in a well-maintained condition. The castle is both a national treasure and a World Heritage site. Surprisingly, it never suffered during wars, earthquakes, and fires and remains intact to this day. Several years ago, the castle underwent an extensive renovation and fully revived its original and bright colors of the roofs and walls in 2015. The castle is located 15-20 minutes’ walk (or five minutes’ by a bus ride ( ¥100)) from Himeji Station.

• Date: Usually at the end of June for three days on the weekend including Friday. In 2018, the festival took place on June 22nd – 24th. Please refer to the official website for the updated information.
• Time: Usually from 16:30-21:30
• Place: Jonan Park in Osakabe Shrine and the shopping streets around the shrine
• Reference: Yukata Matsuri Promotion Association (Phone: 079-287-3652)
• Official Webpage (Japanese only): Himeji city: https://www.city.himeji.lg.jp/contents/yukatafes/index.html
Himeji Yukata Matsuri: http://yukata.maturi.hyogo.jp/
• Access(railroad): About 10 minutes’ walk from Himeji Station on the JR Sanyo Main Line 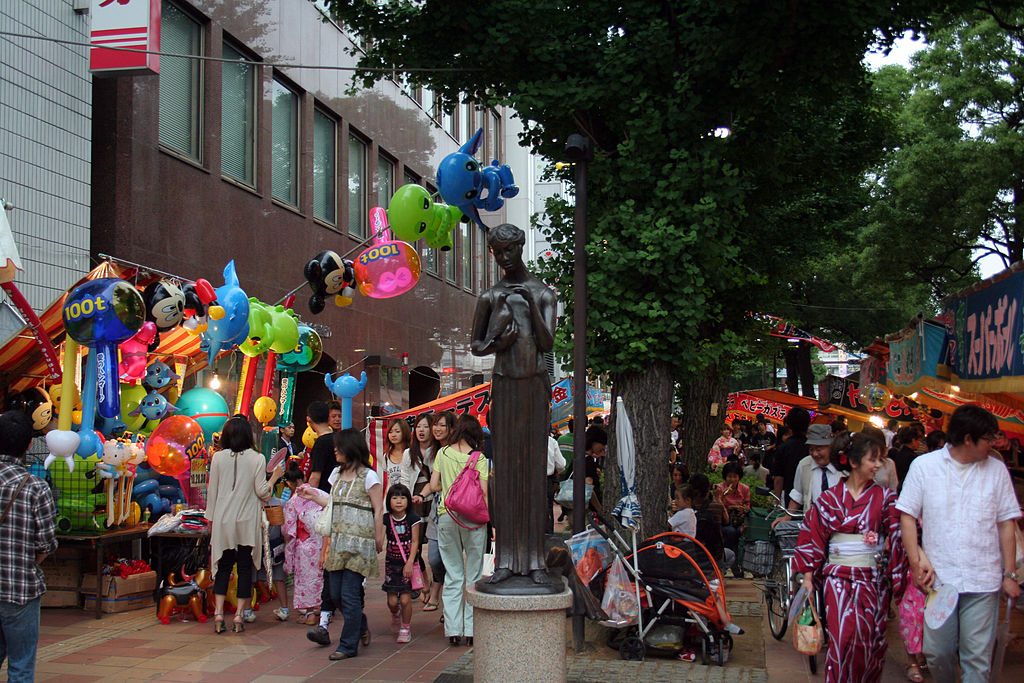 If you have never worn yukata and want to know how to enjoy wearing one, you can check an article on wikiHow. My recommendation is “How to Wear a Yukata.” (https://m.wikihow.com/Wear-a-Yukata). Besides visiting the Himeji Yukata Matsuri will provide you with an ultimate traditional Japanese experience.

If you would like to visit this event with a local guide, find out how to wear yukata properly from the first hands, please click on the banner below!

All Images are courtesy of  Corpse Reviver